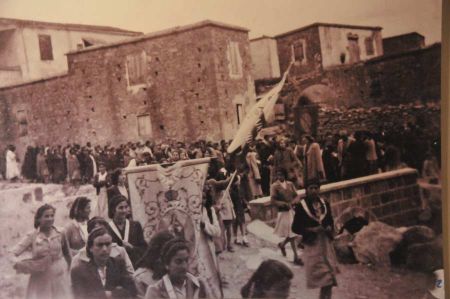 Of course, we were excited to see where the invitation to North Cyprus was leading us to because never before we had heard of a village called Koruçam or Kormacit.

Only one thing from the emails of Houssem was clear: the remaining 195 residents had all decided to implement sustainable tourism and want to be a genuine eco village, which opens up to tourism from now on. But more on that topic later.

Kormakitis is approximately in the middle of the north coast of the island; the nearby cape Kormakitis on the western end of  Pentadaktylos (Beşparmak) Mountain was named after the village and is also the starting point of Besparmak trail, a hiking route of more then 200 kilometers. Before the division of the island in 1974, Kormakitis had about 1,000 inhabitants. Kormakitis is considered to be the only remaining center of a countable number of inhabitants of Cypriot Maronite Church; here also is one of the four Maronite churches of Cyprus. A part of the population speaks Cypriot Arabic. So it is not surprising that even the service in the church is designed multilingual.

The Maronites originally spoke Syrian Aramaic and originated in the 7th century as a spin-off of the Syrian Orthodox Church of Antioch. Their name goes back to the holy Maron, who lived as a monk at the lower Orontes (now Syria). The Maronite Church is united with Christian Church of Rome, which recognizes the Roman Pope as head too. The Maronites are one of the largest and oldest religious communities in Lebanon; their church language is a western-Syrian language.

As followers of Monotheletism they were excommunicated as heretics in 681 after the Third Council of Constantinople. The Monotheletism said that Jesus Christ, although of a divine and of a human nature, but who only has one divine will; he theologically stood between Monophysitism and established the two natures doctrine of Christians at the Council of Chalcedon, the traditional commitment of the Eastern Roman Empire Church, as today's Catholic, Orthodox and Reformed Churches and Christian should follow the ultimately unsuccessful plans of the Emperor Heraclius reintegration of Monophysite churches Armenians, Syrians and Copts serving in the imperial church.

Since the approach of the Maronites to the Roman Catholic Church in the 12th century, the Maronites have abandoned the doctrine Monothelete. Justinian II in 694 defeated fighting the Maronites, who were able to preserve their independence. In the following disputes, in 707, with the Islamic Caliph al-Walid I, they were driven into the mountain and had suffered a defeat against the Abbasid occupiers in 759.

After the destruction of the monastery of St. Maroun by Syrian Muslims in the 10th century, they fled under the leadership of Patriarch John Maroun I. to Lebanon where the Maronite Christianity spread also among the residential Greek, Phoenician and Arab population. The mountains of Mount Lebanon between Tripoli and Beirut and some towns along the Mediterranean coast represents the only larger contiguous area in the Arab world in which an almost exclusively Christian population could still survive.

In the 12th century, the Maronites were on the side and under the protection of the Crusaders. This encounters also their commitment to the Roman Catholic church in 1182. This support was punished by the Mamelukes after the withdrawal of the Crusaders: Maronites, but also Druze and Shiites experienced a period of military prosecution. Nevertheless the Maronites succeeded to maintain their connection to the Catholic Church and expanded. In 1445, they reaffirmed their connection at the Council of Florence and officially apply since then "Eastern Church united with Rome". They are the only church of its branch, suggested itself as a whole to the Pope.

In the Ottoman Empire the Maronites were able to maintain their autonomy in the remote mountainous areas, partly. In cooperation with Druze feudal lords like the Emir Fahkr-ad-Din II and thanks to the excellent relations between the Maronites to Europe, especially to France and Italy, they experienced a cultural flowering in Lebanon during this time. Among other things, Maronite monks introduced one of the first Arabic printing presses to  Islam, the Arabic script was written exclusively by hand until 1729. At Bosporus they looked at these culturally advanced developments with suspicion, the Ottoman retaliation culminated in the execution of the Emir in Constantinople.

In 1638 France explained that all Catholics (and thus also the Maronites) in the Ottoman Empire were under his protection. Nevertheless, Lebanon was governed by the end of the 18th century by Ottomans directly. As a result of Napoleon's Egyptian campaign, succeeded Emirs of Lebanon regaining an autonomy which lasted until the 1840s. In the 17th century the Druze family Chehab had inherited the emirate of the Maans that Chehabs had come to Lebanon in the 10th century and were originally Sunni Muslims from the tribe of Quraysh in Mecca. The Emir Beshir II. Chehab, ruled by his splendid residence Beit ed-Dine, himself and his family secretly baptized Maronites, which is still highly unusual procedure in Orient at the beginning of the 19th century.

The Cypriot Maronite community is generally attributed to migrations during the Crusades. Its members are highly integrated into the political and social life of Cyprus.

From the history of the Maronite community and its culture also reflects a small but very interesting museum in reflecting the living tradition of the local population. So it is not surprising when one meets with a major religious festival in the resort once a year, which also includes international guests and thus overpopulate the village: our entry photo from the museum shows an event years ago.