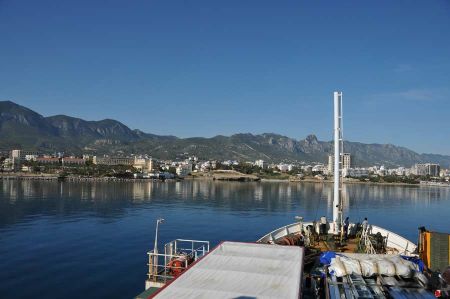 Within our project "A journey of Intimacy and Culture along the Roman Roads" we had the opportunity to spend some days on Northern Cyprus due to an invitation of the municipality Korucam / Kormacit in cooperation with a travel agency.

Since we always like to take the opportunity to explore the destination for campers as an additional option and possible location for wintering, we decided to take the car ferry Tasucu - Girne and back to "learn" about the possibilities for the journey. A first trip by fast ferry from Alanya to Northern Cyprus a few years ago had led to some first articles to be published, which we will expand in the next few days with regard to possible hikes and visiting points. So, please stay excited.

To make it short, the trip is less problematic than initially expected, the formalities are initially somewhat reminiscent to the border crossings to the former East Germany, however, due to couple of official employees and helpers it is easily be done. Since there are now three transitions for vehicles to the south (Greek-Cypriot) of the island, excursions are possible there too, yes, even the possibility in Southern Cyprus to make a round trip from Greece via Turkey and Cyprus with the ferry to Piraeus is possible. But more on that later.

First part of the journey we were traveling on the coastal road D400 from Alanya to the ferry port of Tasucu. Partly so much impressive views of the sea and the coastline during the only 240 kilometers of the track are so much breath-taking that in effect one is "forced" to stopovers several times. Of course there are a lot of bends and narrow passages on the route, which, when passed with the necessary calmness, can be a pleasure to ride as well. If you travel by camper, we recommend a stopover in Anamur next to the castle "Mamure Castle" and the ruins of ancient "Anamurium".

Once arrived in Tasucu, we first picked up the via the internet booked ferry tickets from the local office. Two car ferries operate the route Tasucu - Girne all year round, quite clear not during stormy times. The ferry fare is of course dependent on vehicle size, in our case it was for one way 185, - TL, for the return trip 165, - TL, additional fees at the harbor of 2 x 45, - TL and 15, - TL and 25, - TL must be counted as charge per person and added. As the European car insurance does not apply to Northern Cyprus, even the green card is not enough, an additional insurance must be taken at entering Northern Cyprus, which in our case is 65,-  TL for four weeks. Added together, the ferry costs amounted to 545, - TL for a return trip, which is about 170, - € equivalent (in April 2016).

Upon arrival at the port, the vehicle needs to be parked into the customs area at the harbor first, cause you will need to go to the single offices now, starting with the police for the purpose of identity check of the passport or identity card. Comparable to the entry into Turkey (max. Length of stay is inside Turkey is 90 days), there is next office, where the vehicle is registered in the passport, now the departure from Turkey must be written. Then, the handling charges or harbor taxes are paid directly at the next counter at the toll gate, the ferry ticket is used as a stamp pad to the acknowledgment. Opposite you will find the customs office which now is working on the vehicle formalities. The passport and the registration papers of the car are required, if the vehicle should not be registered in your name, such as company cars, you need a notarized permission confirmation to use the vehicle. Thanks to modern computer technology, the process is quick. After the inspection of the vehicle by an official on duty is done, you are allowed to proceed to the ferry. We had the impression of a well-planned loading, despite the partly resulting rush, but this happens more cause of the impatience of travelers.

The journey on the ferry itself was, at least during our tour, comparable with crossing on a lake. Hardly waves, barely moving. To spend the night in the camper is more recommendable than using the small, hard seats in the boat.  Part wise there are also sleeping cabins in the ship available, but must they have to be pre-booked.

After arrival first way leads to police office counter inside a huge building, then the payment for insurance for the vehicle, where the same entry clearance is issued as a document of the vehicle like in Tasucu, then going to the office of the customs where paper control happens: Upon arrival in the morning in Girne the following path is valid. All the papers are checked and confirmed and entered in the entry document, don´t loose it, you will need when leaving. Do you have peace and serenity, the procedure to pass through is without much trouble. Sometimes one can get the impression that the procedure of transactions is more like chaos, but definitely this is not the case. A final check of the customs officer and you have free travel to Northern Cyprus. Sometimes one forgets the advantages of relatively easy travel within the EU, which is going to disappear due to the migration problem more and more.

For some drivers it is then a real challenge to master left-hand traffic but easy to handle because of the rather passive and calm traffic on the island! Please concentrate on using right back mirror what initially is particularly important in the roundabouts. Looking right into the mirror, which is also important when overtaking. Please do not worry too much, it's easier than first imagined. And for the cities the traffic can rather be described as quiet. On the highway and inside the towns, almost anywhere a top speed is announced, that should be strictly observed. Every few kilometers flash units are installed and the penalties are like draconian.

Currently there are some campsites, some of which are also used by locals. Together with official bodies we also have preliminary discussions on the opening of Camperstops, which can be set up and opened already in the coming months perhaps. To this end, then more articles will follow and also the route to the south (www.camper-route.de) is supplemented. Cyprus offers, due to the location and the mild climate, due to a number of culturally and historically valuable buildings, due to ancient cities and excellent walking routes through the nature of Besparmak Mountain a perfect place for staying during the winter.

Please follow the further publications on alaturka.info and camper-route.de. If you have questions on how to go or where to stay, please contact: This email address is being protected from spambots. You need JavaScript enabled to view it.