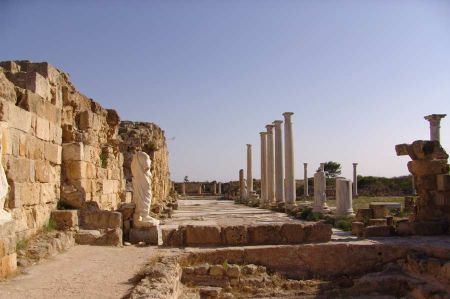 As part of our explorations of Northern Cyprus we approached at the ruins of Salamis next to Famagusta, which played an important rule as a  town kingdom from the 11th century BC as it was the capital among Cypriot city kingdoms.

The history of the ancient city of Salamis goes back to pre-Christian period, but the ruined city shows mainly buildings from the Roman period. So there is a partially restored theater that is still used for events today. An Agora, an impressive Roman bath, which allows the deep insight view into the heating system, a public toilet in the shape of a semicircle building with a deep water rinse and numerous irrigation and drainage lines, demonstrating the technical knowledge of the principle of balancing tubes in the water supply. Ever far from showing the urban arts and despite all exposed surfaces show that here true masters were at work.

The at the beginning relatively small city with a necropolis on its western edge spread since the 8th century BC to three sides. The ancient necropolis was covered by the city and so a new one has to be built in the South, which almost reached until the Monastery of St. Barnabas (see article). The dark age of  Cyprus from the 18th until the 11th century BC (The events happened are different to the dark centuries in Greece) could not be lightened so far. By contrast, the grave finds impart comprehensive knowledge about life in the 8th and 7th century BC. Trade show the influences of the civilizations of Asia Minor, the Middle East and Egypt.

The rule of the Assyrians at the end of the 8th century is reflected in the increased occurrence of Near Eastern elements. The leading role of Salamis at the time of Egyptian suzerainty by the king Euelthon coins (560-525 BC) is proved, where he describes himself as ruler of the island. Stronger than before the history of Salamis was now linked to the island. The disputes with the Persian Empire, in the Ionian revolt and the dispute over the succession of Alexander the Great played another important role. King Evagoras I was allied with Athens and Pharaoh hakor (393-380 BC) and succeeded in the short term, Tyre, Sidon might also bring Dor under his control. Inscriptions in Cypriot archaic writings from Dor could date from this period. In 306 BC a decisive naval battle within the Diadochen War took place in which Antigonus I and his son Demetrius I of Macedon conquered the island from Egyptian generals of Ptolemy I, who had controlled Cyprus until then. Under the Ptolemies, Salamis had lost its guidance to Paphos.

From 54 BC Cyprus is a provisionally, from 31BC finally a Roman colony. The city was ravaged by earthquakes in 332 and 342 AD; the latter connected to a tsunami. In 115 it should have been destroyed against Trajan after Cassius Dio report during the uprising of the Jews and 240,000 inhabitants were killed as reports say. Under the rule of Constantius II a limited area again is rebuilt and bore the name of Constantia. At the time of Bishop Epiphanius (368-403 BC) Paphos is capital as island metropolis again. But Constantia was destined to be a lifetime of about 300 years. Raids of Arabs and natural disasters put an end at the middle of the 7th century and led to foundation of the adjacent Ammochostos, later Famagusta.