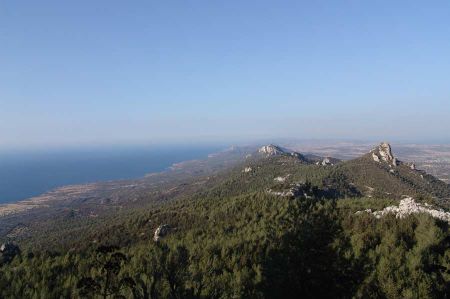 At the beginning couple of our readers have ask for getting some more detailled information about Cyprus, because lot of holiday makers take the chance to go to North Cyprus by ferry-boat from Antalya, Alanya or Silifke once being at the Turkish Riviera.

In between and due to the fact that more and more people like to spend the whole winter time in the South, the situation has again changed. Cyprus became more popular to travellers by mobile homes since there is the possibility to visit both sides of Cyprus anymore: the northern turkish cypriotic part and the southern greek cypriotic part. This short introduction to North Cyprus does not want to effect anybodies mind on the still existing, but slowly getting better situation between the two governments (thanks to some of the inhabitants of Cyprus) and between Turkey and Greece about the island and its resources.

Another option, what makes the island much more interesting now is, that because of some gates in the borderline, you are able to pass Cyprus from Greece on the way to Turkey and vice versa, since there is ferry boat connection between Tasucu and Girne and from Limassol to Piräus.

As the third largest island in the Mediterranean Sea, following Sicily and Sardinia, Cyprus is situated in the eastern Mediterranean, just south of the Anatolian peninsula (or Asia Minor) of the Asian mainland; thus, it is commonly included in the Middle East.

Turkey is 75 kilometres (47 miles) north; other neighbouring countries include Syria and Lebanon to the east, Israel to the southeast, Egypt to the south, and Greece to the west-north-west. The central plain, the Mesaoria, is boardered by the Kyrenia and Pentadactylos Mountains to the north and the Troödos Mountain range to the south and west. There are also scattered, but significant, plains along the southern coast. The island's highest point is at the summit of Mount Olympus (1952 m), in the heart of the Trodos range.

Historically, politically and culturally, however, Cyprus is closely aligned with Europe – the Greek Cypriots with Greece and the Turkish Cypriots with Turkey. Historically, Cyprus has been at the crossroads between Europe, Western Asia, and Northern Africa, with lengthy periods of mainly Greek and intermittent Anatolian, Levantine, and British influences. Thus, it is generally considered a transcontinental island. The major cities in Cyprus are the capital Nicosia (Lefkosia in Greek, Lefkoşa in Turkish), Limassol (Lemesos in Greek), Larnaca, Paphos, Famagusta (Gazimağusa or Mağusa in Turkish, Ammochostos in Greek), and Kyrenia (Girne in Turkish, Kerynia in Greek).