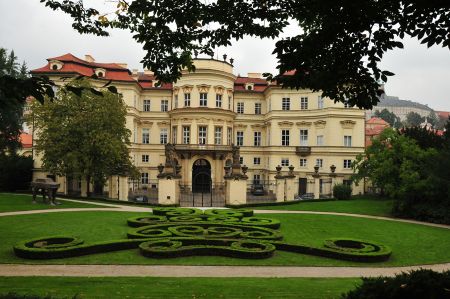 After our ascent to the Castle of Prague, which is called Hradčany (Hradschin or castle town), we have chosen the path through the parkland towards the observation tower Petřín, which is modeled on the design of the Eiffel Tower and measures more then 60 meters of height.

The Petřín was opened to visitors in 1891.

On the edge of the park, below the Petřín, you will find the back site of the Embassy of Germany, called Lobkowitz Palace. As in August 1989, the German Prague Embassy became the focus of the media when GDR citizens sought refuge there in masses. In the following weeks, thousands of them occupied the area, after several discussions with the GDR authorities, they later allowing a total of 17,000 of their citizens to leave the embassy for the Federal Republic of Germany from September 30th. On 3 November, the ČSSR authorities granted GDR citizens the unregulated exit to the West, thus raising their part of the Iron Curtain, which is considered to be one of the most important precursors to the fall of the Berlin Wall and the subsequent German reunification. 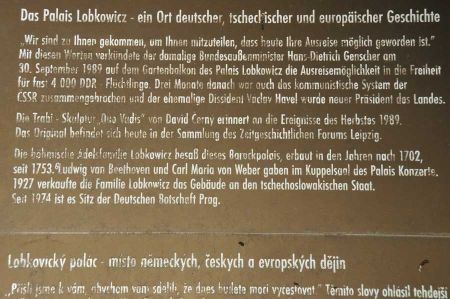 "GDR refugees have always existed in our Prague embassy since we moved to the Palais Lobkowicz  in 1974," said Hermann Huber, ambassador from December 1988 to 1992. Already four years before he took office, he had to help out in Prague on a larger wave of 160 refugees. These were "bought" by the Federal Ministry of the Inner (BMB) with the help of the lawyer Vogel, who was then well known for his activities.

In the run-up to the (almost complete) nonviolent revolutions of 1989, the embassy's site was known as a refuge for people escaping from the GDR. In the summer of that year, some GDR citizens dared to go from Prague's main railway station to the Federal Embassy. On August 19, 1989, there were about 120 refugees living there, 20 to 50 more arrived daily. On 23 August, Ambassador Hermann Huber, on the instructions of the Foreign Office, concluded the baroque palace for public visitors. The Consular Section was temporarily transferred to a Prague hotel in order to maintain the embassy status.

Trabant and Wartburg shaped the picture of the environment 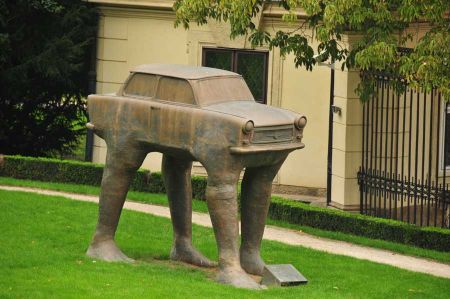 The onslaught on the embassy area, however, continued, further refugees forced themselves to enter, partly passing the watching and controlling Czechoslovakian police through the gate, or by climbing over the fence, which in part led to injuries. In the park of the embassy, tents and sanitary facilities were set up and a school enterprise for children was established. Abandoned vehicles of the brands Trabant and Wartburg coined the picture of the environment; the GDR was soon anxious to remove the dumb testimony. The sanitary conditions in the embassy sprang up during the course of Septembers, at the same time 4,000 refugees were simultaneously on the site soaked with rain. The main occupation of the people was the hour-long queue in front of the toilets, in an ankle-deep mud. Some violent clashes took place with people who were suspected of being a Stasi member.

The then Federal Minister of Foreign Affairs Hans-Dietrich Genscher arrived on the evening of 30 September 1989. He came from negotiations with the then foreign ministers of the Soviet Union (Eduard Shevardnadze), the GDR (Oskar Fischer) and the ČSSR (Jaromír Johanes) on the margins of the UN General Assembly in New York. He told gathered journalists that he did not want to give them any notice, as he wanted to talk first with the Germans from the GDR. At 6:58 pm, he announced from the balcony of the palace: 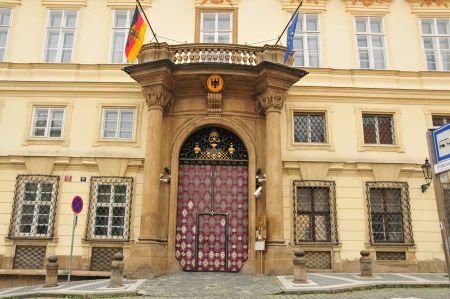 "Dear countrymen,
we have come to you,
to inform you,
that today your departure (Ausreise)
(Thousands of shouts and exultations)
... has become possible to the Federal Republic of Germany. "

At the end of the sentence, the tears of the GDR refugees in the courtyard, who were willing to leave the country, were kind of amused by the word "Ausreise". A memorial plaque on the balcony raises the moving words. The possibility of an indirect departure into the Federal Republic, by train, by way of detour across the territory of the GDR, to maintain the façade of a regular departure from there, was, however, subsequently interrogated anxiously as a result of an arrest by the GDR organs for an escape from the GDR which was still feared. But as history showed, it was working well.