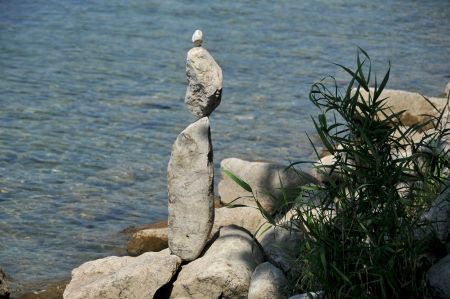 The repetition of a television program on the subject of "extraordinary activities" had made us aware of the activities of Sepp Bögle who is building stone-stacks to small art works without adding any glue or other helping materials in Radolfzell during the summer.

In itself already a very unusual way to make his life professionally, the additional information on the person of Sepp Bögle was even more interesting. Thanks to the internet, it was easy to get contact to Sepp via email, what then ultimately resulted in a visit to his place of work.

Together with Brita and Gerda we went along the German shore of Lake Constance from Friedrichshafen via Meersburg and Ludwigshafen to Radolfzell, where we could park the car near the train station. Of course we had previously asked for the address of Sepp Bögle by e-mail that was answered with "At the pier, the last tree". Meanwhile, as we were thinking, well this postal address is perhaps not so unusual (in relation with his activities!). In order not to loose time on research, we asked a taxi driver for Sepp, his answer quite simple: just follow the way to the "Mole", he told us. By using a tunnel at the railway station and slightly to the left on the pier and then at the end of it, your  meeting is ensured. Of course, the tension was palpable, because you will not often meet people like Sepp.

Whether by a gust of wind or a vibration through the really small swell at the harbor of Radolfzell, we found Sepp on the shore, where he was busy with the restoration of a stone sculpture. Few moments later, he straightened up and climbed the Mole to greet us. Very soon we were in a deep conversation, which initially led to a brief explanation of his mutual activities. We quickly passes on to Turkey and the political and religious changes in the country because of our Alaturka origin, whereupon Sepp pitched his private photo album and showed us pictures of the Hagia Sophia in Istanbul. In the 70s, Sepp had already spent some time as dropouts so, by bicycle over Austria (where he wanted to apply for a visa for Albania), Yugoslavia, Greece and Turkey to go on to India. From one Greek island to the next, Sepp arrived to Turkey by ship, where he continued to Istanbul by bicycle. These were then activities that are known to us since some of our friends had driven out into the world too. Sepp's first experience as a spontaneous rucksack-traveler started at his tender age of early twenties.

Sepp Bögle was being trained in Bad Säckingen as an industrial clerk and then ceased to be employed to undertake a one-year tour of Asia. After his tour, he started a second training as a chef in Gundelfingen, this time with the idea, that then he can find a job all over the world just to see more of the world. It drove him to Bali and to Singapore, where he met his future wife. In Dogern he then married and took an apartment together in the 80s. Again there was a swirling in the activities, because now Sepp worked quite successfully as a sales representative. A "normal" life begun.

A house in Meßkirch was purchased, two children were born and brought up, Sepp wore a suit and tie, drove a "big" car and got his pilot's license. It could be described as a normal, middle-class life, with all the joys and constraints that hold life brings, if one limits the emphasis on the professional areas and thinks only of wealth and success. Slowly one becomes alienated in marriage, at first almost unnoticed, then suddenly nothing works. Sepp describes this feeling as follows: "The interior will be the loser." The marriage breaks down, the house is sold.

Together with his daughter he moved to Radolfzell at Lake Constance especially since his daughter, who wants to study Japanese in Munich. For Sepp, this moment is a crucial turning point, because from now on he has one hand for himself, he is only responsible for himself anymore. He had never been really happy in his life before. The change of the long-cherished desire in a completely different life finally begins in 1997. In his head, Sepp has long been free from the pursuit of profit, for social advancement and career thinking, wants to get away from the pressure to perform well as a different type of quality of life. He reduced his personal belongings extent that it fits into a suitcase, rents a room in Hotel Adler Radolfzell and focuses now on the placing of stones that he finds at the pier. From April to October, this is in addition to writing books, his main occupation in Germany, during the winter months, he uses a small holiday hotel in Lanzarote doing same.

Even over the years, Sepp had studied the issues of inner balance. Family and work were often in the way. By stripping his previous life Sepp finds his equilibrium. And increasingly he tries to help others to cope with their problems by providing guidance and wisdom. He provides this the best example: "Look, it's also completely different". He is writing on his own advice and suggestions, yes, even a thesis entitled "Just Be" is published. Sepp is now the performance artist and author.

It is also a matter of marketing his publications to use the idea to stack the stones as a strategy for marketing. Every day he goes to the pier, looking for the stones from which he wants to use for sculpting. Every day he is feeling as quite interesting to find new stone objects that attract many visitors. He balances the stones without the usage of adhesives or other aids and sells photos of his sculptures to him in addition to the books to finance his new life.

Of course, the question was still, how the city Radolfzell would react to his activities, even Sepp has lived his life as an "ordinary" citizens with registration card and health insurance. In response, he presented a newspaper article with a large picture of himself and a small image of the richest citizens of Radolfzell. Often pictures say so much more than many words, for long Sepp deemed factotum of the city Radolfzell. Long ago it refers to him as "Diogenes from Lake Constance", which shows in addition to the activities of piled stones and philosophical ambitions.

Up to a maximum of five stones he layers them on one another so that the stones are supported only on a small surface on the stone underneath. He systematically chooses stones that form the smallest possible contact surfaces and are held in balance only by gravity. The results are impressive sculptures of stones of various sizes and weights. In the evening, these sculptures are, for reasons of accident prevention, dismantled.

"The sculptures are a metaphor for life itself, its beauty and its dangers."

In winter he is moving to Lanzarote, where he continued his activities. There is the beach section of a five-star hotel that attracts the action artist for a few hours daily. Of course, the issue of insurance cover comes on, which is answered by Sepp as follows: If I need a doctor, I visit a friend of mine. The help will be done without financial benefits and he is always uninsured.
e-mail: This email address is being protected from spambots. You need JavaScript enabled to view it.

Body Worlds in Istanbul - The cycle of Life