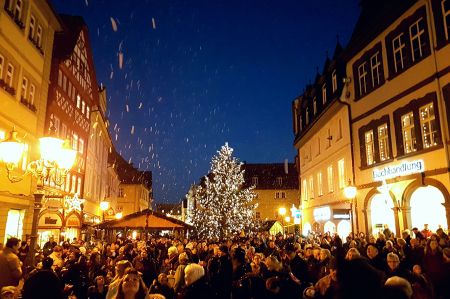 In contrast to the past few years, the Christmas market in Kitzingen should be limited to one weekend anymore, but the motto still is "Kitzingen glows", we were interested and still lack of time able to go, so we passed on the old Main bridge on Saturday evening again.

First, we went to the inner market, once again the most impressive part was the presentation of the local suppliers of Christmas decorations, self-made candles and various woodwork, which were probably the most frequently visited by the people, as well as some hand painted pictures showing the historical past of the city as well.

According to legend, the town of Kitzingen was found around 745 with the founding of a women's convent by Hadeloga, a daughter of the Frankish housekeeper Karl Martell. When she was on the terrace of the castle of her brother King Pippin III. during a summer's day, she stood next to the younger one (called Pippin the Short) on the Schwanberg and looked into the Main valley at her feet, she was so much taken with the sweetness of the landscape that she decided to found a monastery. She gave her veil to the wind, which carried it westward into the valley. Where the veil fell to the ground, she wanted to have the monastery being built. The shepherd's fawn found the veil hanging on the western beach of the Main on a vine, and the monastery was built there. In honor of the shepherd name it was called Kitzingen. As far as the legend tells.

The earliest recordings of a convent in Kitzingen is in the life description of the first Fulda abbot Sturmius, in the via sturmi under apud Kizinga monasterium indicated from the year 748, with Hadeloga as its abbess. The fact that the monastery had been built some years before is clear, as otherwise it could have been mentioned. The town of Kitzingen celebrates the year 745 as the founding year of the city and Hadeloga as its founder.

However, Hadeloga probably did not come from the kingship of the Carolingians. Her name is not to be found in any of the Karolingers' ancestral tablets. And around 745 there was neither a castle on the Schwanberg, from which she could have thrown her veil. Even Adeloga or Adelheid, daughter of Pippin III, described in Zedler's Grand Universallexikon of 1732, can be excluded as a monastery-founder, since Adelheid was born in 746. She was probably the successor of the first abbess.

Today it is assumed that Hadeloga came from the influential nobility of the Mattons. That the monastery had the rank of a Reichsabtei underlines the importance of this sex.

Be that as it may, there are examples of how history is something, let's say "bent", if it is still unclear and / or is to meet a different desire like that of the city marketing. But we also know that behind every legend there is always something truth, with which we are back to the Christmas market. We, and we join ourselves, love the lights in the dark, enjoy the mulled wine and the offerings of the traders in the Advent, this was once fasting time. Similar idea - different story: snowflakes were silently falling - but made from soap.

History and - Mainbernheim is ready for Christmas too