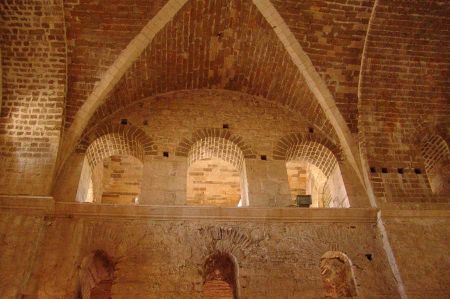 Myra, located in the south-west of Turkey, in the magical landscape of Lycia, was the city where St. Nicholas had worked as a bishop in the fourth century.

In the 5th century, Myra was the capital of the province of Lycia, and its metropolitan was the second-most powerful church head of Asia Minor. Soon after the death of Nicholas around 350, Myra became a place of pilgrimage. Here, when one was in need and distress, the bishop who was later to be consecrated, was a helper in all need, whether it would be children, young women, sailors or because of starvation.

Probably before 530 a small church or chapel was erected on the site of his grave, outside the actual city, in the necropolis, as was customary in antiquity, and probably just at the place where his church stands today. In 529 an earthquake destroyed the city so catastrophically that the Emperor Justinian granted financial aid for the reconstruction and tax exemption. The basilica was rebuilt too, but destroyed by the Saracens in 808. Here, too, restoration took place quite rapidly, due to the particular theological significance of the site. Remains of the old plant are still visible in details today.

The time of the 11th century, when the first monastic and tomb buildings were errected, was a time of restlessness and upheavals and also a time of decline for Myra. In 1034 again victims of Saracen raids, whereby the church was largely destroyed, was only one date in this century, which shook the Byzantine world. In 1071, the Seljuks defeated Manzikert in eastern Turkey, defeating the Byzantine lord under Roman Emperor Diogenes. The path of the Turkish-Islamic occupation of the whole of Asia Minor was paved. Turkish military units quickly advanced to West Anatolia, destroying and plundering Myra. It was the time when the corpse of Saint Nicholas was robbed by Bari's merchants and sailors, where it took its reputation as an incomparable triumphal advance through the West.

In the Middle Ages a larger monastery was built around the now orphaned church, to supply and care the pilgrims, which proves that there must be a small flowering once again.

Myra, however, decayed, was partially abandoned in the 15th century and rediscovered for the West at the beginning of the 19th century. A map of 1812, drawn by English travelers, captures the then state of the city and monastery. Through the erosion of the previous centuries, the coast was flooded, the ruins of the city buried under a layer of about 6 meters high.

Through the initiative of the Russian Czar, who wanted to preserve the sanctuary of his name patron from decay, the church experienced a sweeping renewal and partly a completely new form in 1862-63. This construction, which we have today, could not be completed, since the Turkish authorities forbade further work because they feared a threatening influence of the Christian Orthodox Church and the Russian power behind it.

Since 1963, the Turkish restorers have begun to systematically open the church, and numerous additions have come to light.

The most important change, which took place in the nineteenth century, consisted in the overburden of the central area. Where originally a dome spanned the room, there was a monumental cross-arched vault. In the east, the room is closed by an apse with three windows symbolizing the triad. The side ships are separated from the main nave by three arches over pillars. The west wall is divided by three entrances leading to an exonarthex and a small atrium.

This building is made of one piece, which is also indicated by the uniform masonry with the strips of brickwork.

Whether the ancient colonnade of the column in a niche on the southern side is the tomb of Nicholas is hotly discussed in research. The niche would be the appropriate place for the preservation of a sacred sarcophagus, but the analysis of the coffin cover revealed that it was not a work of origin, but that the niche was used for later usage. The knowledge of the original place of the Holy Sepulcher has probably been lost.

Saint Nicholas of Myra - a Christian character in Demre

Spirit of Christmas in Kitzingen - it is shinning