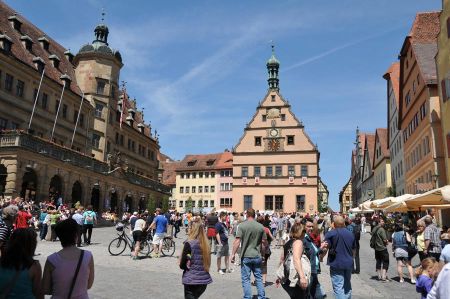 After yesterday's tour through Kitzingen and Iphofen, we now want to undertake a day tour to Rothenburg ob der Tauber, another medieval town in the Central Franconian district of Ansbach, which is now visited in large numbers by tourists from the Far East due to its historic old town and the well-preserved city wall will. 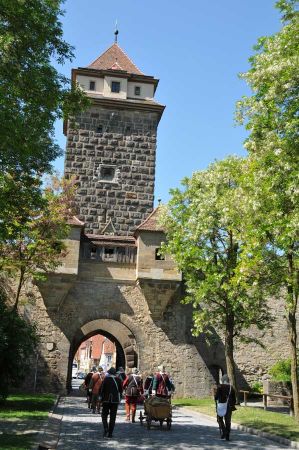 We are on the road early and so we can use a parking lot directly at the city gate, which is available free of charge. Due to the high number of visitors, parking within the city walls is reasonably only permitted for local residents.

We immediately notice a peasant soldier dressed in medieval clothes, who is on guard at the restaurant opposite and seems to be involved in loud discussions with other colleagues who are “armed” with swords and long spears. The cameras are already out again and the first photos are taken on the way over to the soldier.

In conversation with him we learn of our luck, because like every year at Whitsun, the celebration of the so-called “master drink” will take place in Rothenburg ob der Tauber again this year.

The Comburg-Rothenburg family for founding the city 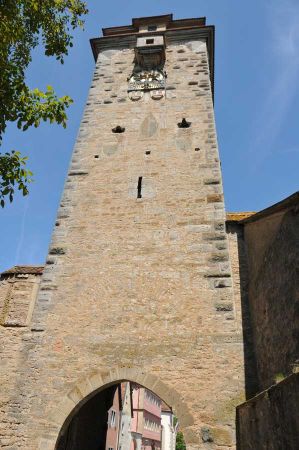 Pure coincidence, because we didn't know anything about this major regional event. The argument between the soldiers was already part of the festival, which sees its background in the 30 Years War.

But more on that later.

Around the year 970, an East Franconian nobleman named Reiniger founded a parish in Detwang, which is where the real origin of Rothenburg can be seen. In the further course of history, the Comburg near Schwäbisch Hall and the Grafenburg above the Tauber were built. The Comburg-Rothenburg family, who settled in the region in the 9th century and are also responsible for founding other cities with the same name, were largely responsible for the actual founding of the city of Rothenburg. 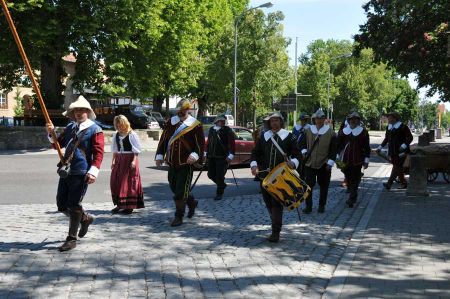 Before they died out in 1108, the Comburg-Rothenburg family had founded six other cities called Rothenburg, four of them in Germany, one in Switzerland and one in present-day Poland, which is now called Czerwiensk. Unfortunately, Comburg Castle was also destroyed by an earthquake in 1356, which the last family member, Count Heinrich von Rothenburg, had transferred to the Comburg Monastery.

King Rudolf von Habsburg made Rothenburg an imperial city on May 15, 1274. Through skillful land acquisitions, especially by Heinrich Toppler, who between 1340 and 1408 was able to expand the city considerably due to his energetic policy, making him one of the most famous citizens of Rothenburg. In 1579, the mayor and council of Rothenburg ob der Tauber signed Martin Luther's formulas of concord. 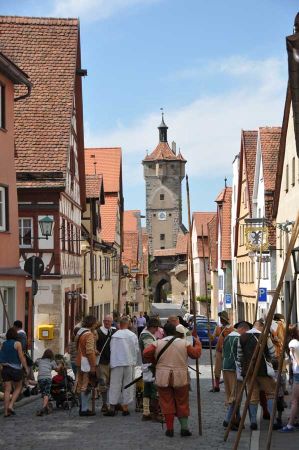 During the Thirty Years' War, Rothenburg was besieged and taken in 1631 by the Swedish troops of General Graf von Tilly, a total of around 60,000 men. As was quite common at the time, the city should be destroyed or burned after the conquest. At this point, legends and myths set in, which also form the reason for the annual celebrations in Rothenburg ob der Tauber. General Tilly, who has never entered the city, is said to have sentenced the councilors to death and then the city went up in flames. When he arrived, the councilors allegedly presented him with a 3.25 liter wine glass as a greeting, whereupon Tilly was put in a mild mood and asked a councilor to drink the wine in one go. If this succeeds, he would spare the city. 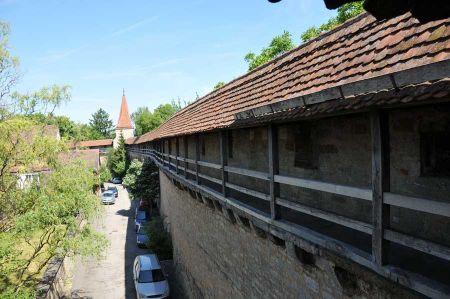 The former mayor Georg Nusch signed up as a volunteer and was able to actually empty the wine in one go, thus saving Rothenburg from destruction. This event forms the background for the festival of the so-called “master drink”, which takes place every year today.
With the withdrawal of the occupiers in 1650, Rothenburg quickly lost its importance, which is probably the real reason for the good preservation of the excellent building fabric from the Middle Ages. Fortunately, even during the Second World War, the city was spared severe destruction, so that today many fortification towers and almost the entire city wall are completely preserved.

Rothenburg - tour on the city wall 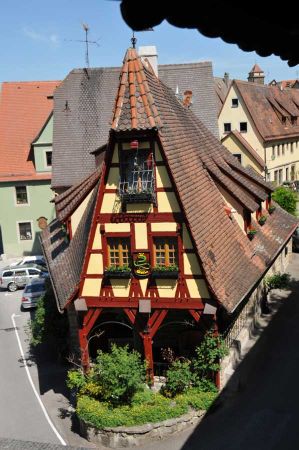 Our tour on the battlements of the city wall also showed us a convincing solution for the preservation of the city wall by visitors and guests from all over the world. In a kind of sponsorship, the visitor can “acquire” a piece of wall one or three meters in length, which with the help of his donation can then be maintained and thus preserved.

Each sponsor is then assigned a section of the wall, a stone slab with his name inserted and can now be assigned by all future visitors.

After an almost complete tour, we leave the city wall and turn to what is happening in the city center. We had already noticed groups of soldiers, musicians and “city leaders” several times, strolling through the city seemingly aimlessly in their colorful costumes. Only later did we find out that all entrances to the city were now "occupied" and that visitors now had to pay "road tolls" into the city. Jugglers and historical guilds had meanwhile set up a large number of stands and began their activities. There was hustle and bustle everywhere and so we followed the current to the center of the city.
More and more mercenaries pervade the city 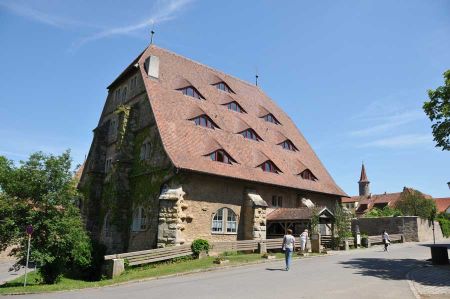 Over and over again groups of soldiers passed by, mixed groups of women in colorful clothes, children with medieval carts pulled by, musicians and dancers in many corners. Everything staged in such a way that it was hardly noticed as a staging. You almost got the impression that you were back in the Middle Ages 500 years ago. There were traders who sold their goods, even a historic market next to the town hall. Groups of soldiers also camped outside the city, then marched through Rothenburg armed with cannons, and fired them loudly. An entertaining afternoon with interesting food and drinks that gave a deep insight into life in the Middle Ages.