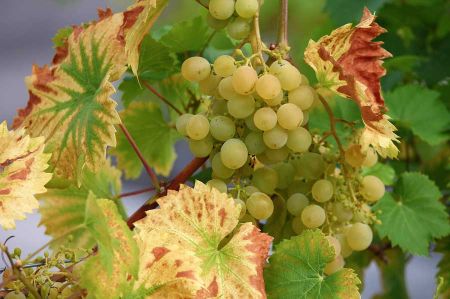 From archaeological findings of grape seeds in Dikili Tash, a tell near Philippi in the Drama regional district, researchers discovered that grapes were processed from wild grapevines in Greece as early as the late Neolithic period.

After another find in what is now Iran, the findings in Greece are the second oldest evidence of this type in the world.

Several centuries later, during the early Bronze Age, there are already numerous evidences of the widespread use of the grapevine. Excavations on the island of Crete reveal the pre-Greek history of viticulture in this region. One of the oldest wine presses in the world can be seen in Vathypetro, an archaeological site near Archanes. The excavated stone press and numerous clay vessels from the Minoan culture show that Crete was the cradle of commercial Greek viticulture. The resinated wines that are still produced today are likely to have their origin in the previously practiced preservation method, in which the walls of the amphorae were sealed with resin.

Way of wine cultures via the Cyclades 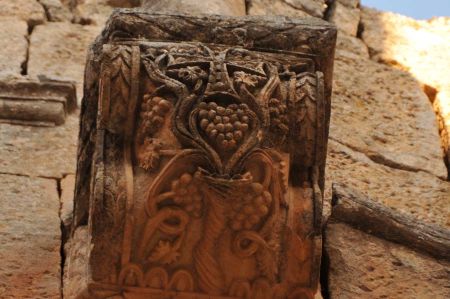 Thanks to intensive trade relations, wine and viticulture soon came to the island of Santorini. Viticulture found its way to mainland Greece via the Cyclades. Presumably, however, this was not the only way to spread it. Since the old Babylonians were familiar with viticulture at least as early as the Egyptians, it is likely that it spread over today's Turkish west coast of what was then Asia Minor via the Aegean Islands. Vines or grapes can be seen as construction symbols or designs on many buildings of antiquity.

Archaeological evidence of intensive viticulture during the Mycenaean culture between 1600 and 1150 BC are abundant. In addition to dried seeds and the remains of pressed berries, there are numerous images on ceramic works such as pots and vases.

The berries were mashed in a vessel called Linos in his time. The juice obtained was usually put into a pithos for alcoholic fermentation using a goat skin wine tube. Amphorae were used in antiquity as storage and transport vessels for oils and wine, garum, tropical fruits such as dates and others.

Wine to be mixed with water 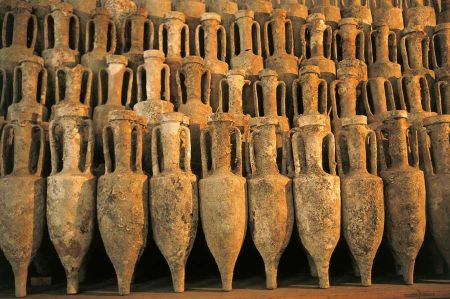 Wine was always drunk with water; the consumption of undiluted wine was considered a characteristic of the barbarians. Unmixed wine was just used for the religious libations at the beginning of a symposium. In the early days, Greeks often used the wine kettle as a mixing vessel to dilute the mixture (Lebes or often incorrectly referred to as Dinos), but later other forms of the crater prevailed. An insert for the crater, called a psykter, was used for cooling. For this purpose it was filled with fresh water or, less often, with hail or snow.

To fill the transport vessels, ladles or vessel shapes such as the kyathos were used. Jugs such as Oinochoen or Olpen were used for transport and pouring. The skyphos, the kantharos and the occasionally very popular kylix drinking bowl served as drinking vessels. In some regions, special shapes emerged as drinking vessels, in Laconia, for example, the Lakaina was particularly popular. With their drinking and feasting culture, the Greeks had a great influence on other Mediterranean areas; especially the Etruscans were very much oriented towards the Greek drinking culture.

Reports about Viticulture came up with Homer already 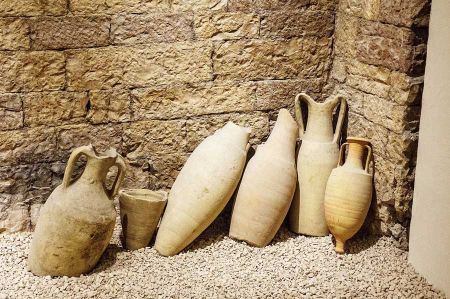 The times between 1200 BC and approx. 750 BC due to a lack of written sources or archaeological finds, little research has been carried out on it and are therefore also referred to as dark centuries. It is the time between the end of the Mycenaean palace period and the upswing in the late Geometric and Archaic times from around 750 BC. Even in Homer's works, wine is represented as an important part of everyday culture. Even if the mythical Nestor cup mentioned by Homer has not yet been found, a number of Homer's descriptions are backed up by archaeological finds.

Hesiod was the first Greek author to deal with work in the vineyard and the making of wine in his work. In his epic didactic poem Works and Days, the author, who lives in the 7th century BC, reports on the grape harvest on the island of Chios. In addition, Hesiod reports on the correct storage of the wine. 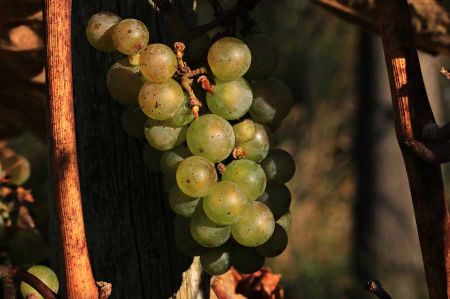 The first botanical observations go back to Theophrastus of Eresus. In his natural history of plants, Theophrastus deals primarily with questions of wood technology and the use of wood, but also the location of various useful plants, including the vine. In his work De Odoribus (About the smells) he describes the influence of the soil and the water supply on the wine and summarizes the spices that can be added to a wine to improve it.

In the archaic period (700 - 500 BC) there was a great colonization of the Mediterranean area. In addition to overpopulation and securing trade routes, the reasons were internal struggles in Greece. Wine exports benefited considerably from this colonization. In addition to Athens as the most important domestic market, markets were opened up on the Black Sea, along the Danube as far as what is now Austria, in southern Italy to Solunto and to Etruria. The most important means of transport was the ship. With the founding of Massalia, today's Marseille, the Greeks gave the local Celts their first insights into commercial viticulture and thus laid the foundation for viticulture in France before the Romans.

Wine as trade good from Island of Ikaria 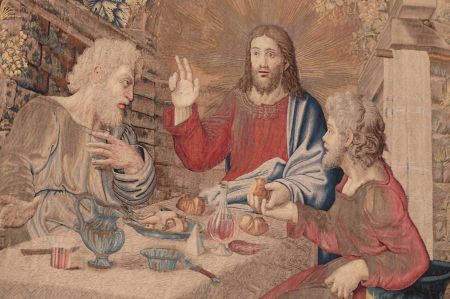 Wine became a popular commodity early on. From Homer we know about the pramnios oinos, a wine from the island of Ikaria. Fame later went so far that the pramnios oinos became a synonym for strong, alcoholic wine and did not necessarily have to come from Ikaria. A little later, wines from the Aegean islands were considered excellent. The wines of the island of Chios enjoyed the best reputation, but the products of Lesvos and Thasos were hardly inferior to the former.

The importance of wine grow since the 5th century BC at the latest. The example of Thasos, the northernmost Aegean island, shows that a wine law was already known here 2,400 years ago. On two marble slabs that were found on Thasos, there were inscriptions relating to regulations for wine production and the wine trade. In addition to taxation, the trade in grapes, must and wine was also regulated. To control the export, the amphorae were marked with stamps.

In addition to wine taxation, the rulers issued legal regulations for wine production. Also in ancient Greece one seriously dealt with the cultivation of grapes. The enormous level of knowledge of the ancient Greeks also provided development aid to other peoples with regard to viticulture. 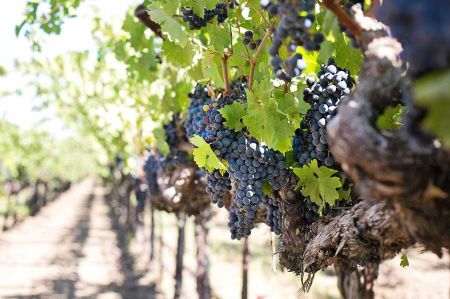 It is believed that viticulture in ancient Greece had entered its golden era between the 6th and 4th centuries BC. But with the Romans and the Byzantines too, viticulture in Greece initially retained its high status. However, after the end of Hellenism, the city of Athens increasingly lost its importance. The more difficult access to the most important transshipment points in the Mediterranean region had an effect; the reputation of Greek plants faded noticeably.

Today's Monemvasia is the namesake of one of the most important export goods of the eastern Peloponnese, the Malvasia wine. The prohibition of belief in gods in Greece after the introduction of Christianity had at least a short-term impact on wine, as almost all activities in viticulture were related to the now forbidden god Dionysus. The transfer of power from Rome to Constantinople after the division of the empire in 395 did not bring about the hoped-for easing of exports. Viticulture was almost exclusively restricted to personal consumption or consumption in the monasteries.

Apart from resin, flavoring wines has almost been given up. The dilution of wine was also frowned upon. Nonetheless, the name krasi was retained, derived from the Greek verb for "to mix", which therefore previously o just applied to diluted wine; to this day it is synonymous with wine. The expansion of sweet dessert wines based on partially raisined berries became more and more popular.

Loosing monopoly of viticulture to Venice 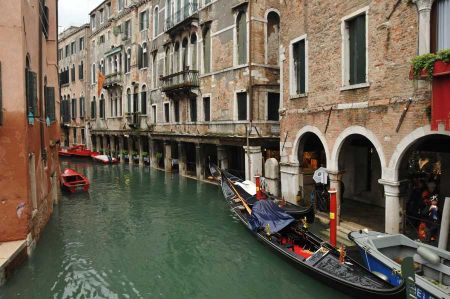 In 992 the Republic of Venice was granted a privilege that significantly reduced trade taxes in the Byzantine Empire and favored Venetian traders over those from competing cities. The Monemovassios oenos, a wine that was loaded at the port of Monemvasia and became known under the name Malvasia in France, Germany and England, developed to a bestseller.

The privileges enabled the Republic of Venice to import foreign wines at unrivaled low prices. This brought many of the local producers to the brink of ruin. The largest export markets of mainland Greece and Crete had also passed into the hands of the Italians.

We have 520 guests and no members online