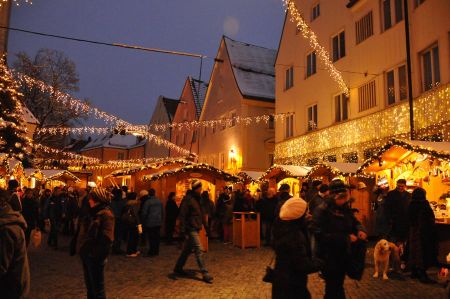 In the run-up to Christmas, the streets and houses in many places are decorated for Christmas and together with the Christmas market, which is usually located in the historic town center of a place, form a festive setting with fairy lights and sparkling decorations. Differently referred to as the Christkindlmarkt, Christmas, Advent or mulled wine market, depending on the region, the origin of this festive market goes far back to the Middle Ages. 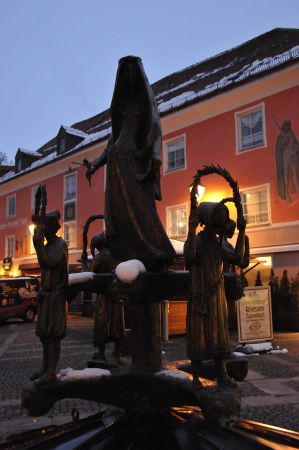 At the beginning of the cold season, the citizens of the cities should once again be given the opportunity to buy things that were urgently needed for the winter. Originally, Christmas markets were based on the sheer necessity of creating a market and trading place to stock up on the local population's needs.

It was not until the beginning of the 20th century that the markets increasingly became a part of the pre-Christmas events. The range of goods on offer also changed continuously. At first it was everyday necessities for subsistence, now decorative products, jewellery and Christmas needs were offered. The original market stalls also changed more and more.

Today, a typical Christmas market usually consists of a number of stalls, which are often modelled on small historical buildings or wooden huts and are mostly set up in historical surroundings, so that together with festive lighting and Christmas decorations, a crowd-pleasing backdrop is created. 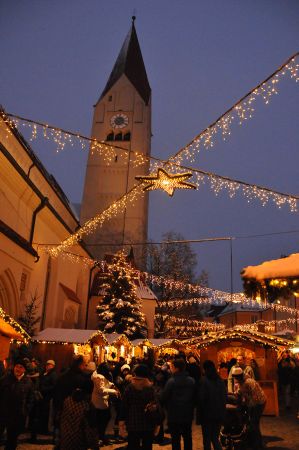 In addition to the sale of Christmas decorations, regional specialties such as Printen, gingerbread, speculums, Christmas stollen, roasted almonds, hot chestnuts or hot dishes are often offered. Here in Kaufbeuren, it was cinnamon waffles that came out of the waffle iron and smelled wonderfully, and demanded customers. A large number of warm drinks are also part of the offer at a Christmas market, such as mulled wine, Feuerzangenbowle, mulled cider or punch, which are also used to warm up during this frosty time. In the meantime, visiting the Christmas market after work, usually together with a few colleagues, has almost become a tradition. Unfortunately, it is precisely the alcohol consumption that is negatively noticeable in the otherwise so festive environment and actually does not correspond to the Christmas spirit at all. For this reason, the serving of alcohol is already regulated in many places.

“Schwibbogen” from the Ore Mountains 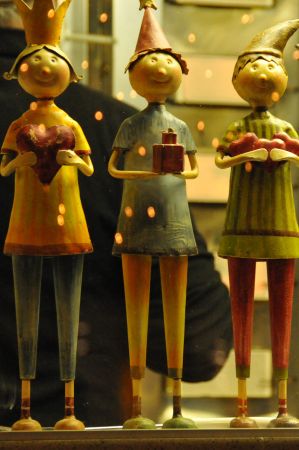 Of course, almost the entire range of Christmas decorations is on offer in the stalls. In addition to the colourful glass balls, the Advent stars and the tinsel, there are also regionally different products such as cribs, the so-called "Schwibbogen" from the Ore Mountains, the Christmas pyramid or the wide range of incense smokers. In addition, there are often handcrafted jewellery, sweaters or scarves, decorative materials of the most diverse manufactures. A colourful picture that always attracts new visitors, even if there are only a few market stalls.

The Christmas market is often expanded with a cultural program. Santa Claus, the Christ Child or St. Nicholas appear in front of all the younger guests to shorten the pre-Christmas period with small gifts. In some places, hand-made Christmas cribs based on the story of Jesus or additional groups of figures are set up, in some places even "decorated" with live animals such as sheep and donkeys. Nativity scenes are also quite common, whether at the Christmas market itself or in the community premises.

Christmas cribs based on the story of Jesus 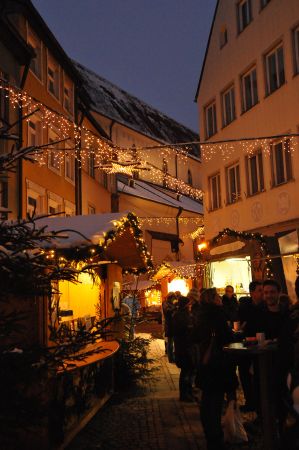 Probably the most important decorative element, however, is the Christmas tree, which is festively decorated and illuminated and is the special attraction of the market. Especially in the dark season, the festive lighting in the trees is a wonderful backdrop that expands the Christmas market in the city, so not only fir trees are festively lit today.

In the old town of Kaufbeuren, we noticed the huge Advent wreath that almost makes the city fountain with the Neptune figure disappear. With a diameter of at least eight meters, this Advent wreath is considered the largest real Advent wreath in the world, because it actually consists of real fir branches that are tied to form a wreath. With the production of this huge wreath, the city's marketing department always provides an interesting spectacle, as the wax candles alone, which are around 1.50 meters high and weigh up to 150 kilograms, are worth the trip.

Neptune's fountain with the Advent wreath the center of the city. 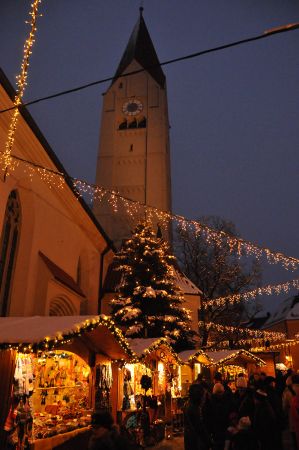 We wish all readers a peaceful pre-Christmas period.