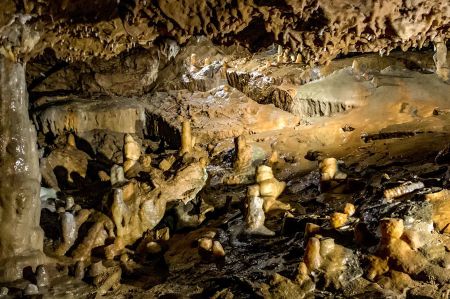 During our exploratory trip through Franconian Switzerland, we also came to the village of Pottenstein, which is best known for its stalactite cave with the somewhat eerie name "Devil's Cave".

In Franconian Switzerland there are about 1,000 caves due to the special rock formations and the superimposed deposits and layers of different rock origin; The Teufelshöhle is considered the largest of these caves and, due to the rich stalactite decoration with overwhelming stalagmites and stalactites, one of the most beautiful show caves in Germany. 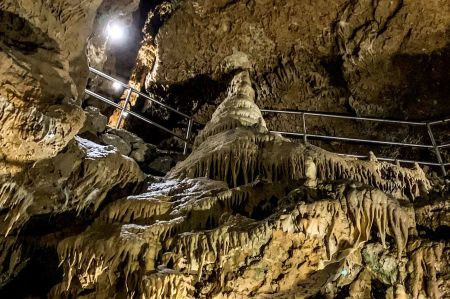 During the White Jura period, a tropically warm shelf sea stretched across large parts of southern Germany. Sponges and microorganisms colonized the sea floor and formed extensive reef trains. An abundance of animals animated the sea. Today, many of these sea creatures are known from fossils. The imposing rock formations around Pottenstein are so-called tabular dolomites (Malm delta). The rocks have emerged from former sponge turf areas. The sponge reef limestones were mainly converted into dolomite during the Upper Jurassic by magnesium supply. The Franconian Dolomite, with its rock walls and towers, which have been prepared by erosion, determines the extremely attractive image of Franconian Switzerland.

The mighty cave portal of the Teufelshöhle - the so-called "gateway to the underworld", the naming can probably be seen in this context - is about 400 meters above sea level between Pottenstein and the Schüttersmühle, about two kilometres south of Pottenstein in the narrow valley of the Weiherbach on the west steep slope. The cave entrance, a 25-meter wide and 14 meter-high portal, is one of the largest cave entrances in Germany. The cave itself has been known to people for thousands of years, as evidenced by traces and finds. The cave portal itself used to end about 85 meters below the mountain and was called the Devil's Hole. 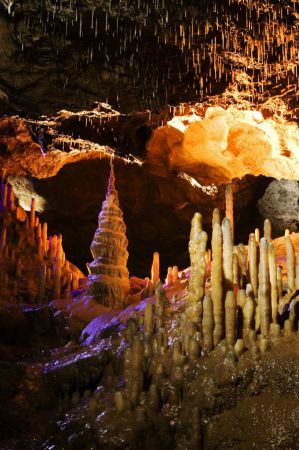 In 1922, Hans Brand, a geologist and mining engineer from Bayreuth, broke through an approximately nine-meter-thick wall that had formed as a result of a fall in the Teufelsloch and thus discovered the cave parts decorated with stalactites, which were made accessible to visitors until August 1923 and temporarily open to visitors became. In a further development measure starting in 1923, further cave rooms could be developed within eight years and connected with each other with a total of about 300-meter-long tunnels. At Pentecost in 1931, the Devil's Cave was opened to the public for a full tour.

The cave consists of several large halls, which are connected by narrow, tunnel-like passages that were mined when the cave was opened up. Including all side passages, the tunnels and the production shafts created to open up the cave, the length of the cave is around 3,000 meters. The show cave part has a length of about 1,700 meters, of which about 800 meters are accessible for guided tours. With more than 150,000 visitors a year, the Devil's Cave, which is operated by the Devil's Cave Association, is one of the most visited show caves in Europe. In Germany, only the Atta Cave in Attendorn has comparable visitor numbers.

In addition to the stalactites and stalagmites, which are now illuminated in a very modern way with coloured, energy-saving LED light, bone remains of over 90 cave bears have been found that probably once lived in the cave. A skeleton of a cave bear is also well lit and exhibited right at the beginning of the circular walk. Despite a few bottlenecks, the cave is very easy to walk on, so that the circular route can be walked without a great deal of climbing.

Application of speleotherapy within the framework of types of therapy 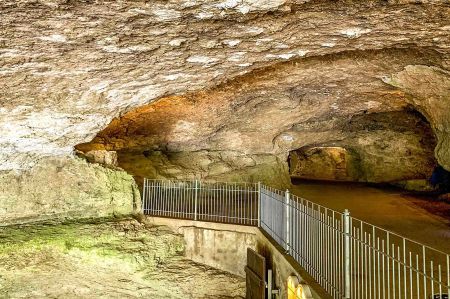 The Devil's Cave is now used for various purposes. In addition to the regular guided tours, the event series Culture in the Devil's Cave in the entrance cave has taken place several times during the summer months since 1994. Since 1986, the Devil's Cave therapy center for the use of pelotherapy as part of therapy cures has been located in a side tunnel. In another side part, the only cave laboratory in Germany has been maintained since 1971 by the research group "Cave and Karst Franconia".