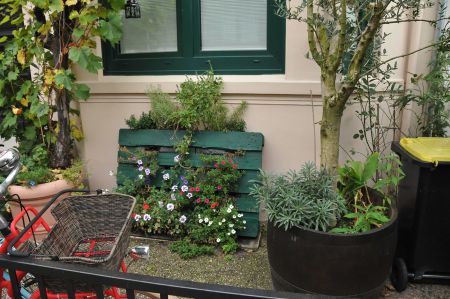 Every city has its own neighborhoods, some of which are well-known all over the country. Others are dying for years, until they are rediscovered as attractive residential buildings.

Every visitor to Bremen knows the well-known town hall, the Roland, the Bremen city musicians or the Havenhaus at the Vegesacker harbour. The school ship of Germany on the Vegesacker bank in Lesum is one of the most popular addresses. Also worth a visit are the Schloss Schönebeck, the Wasserburg, house Blomendal and the submarine bunker Valentin in the district of Farge. The 'Skyline' of Blumenthal: the towers of the Catholic Church of St. Marien, the Lutheran Church and the Protestant-Reformed Church and the water tower, all of which were created in the style of bakingsteotics in the neo-gothic style. Very interesting and world famous.

On the other hand, the notoriously former unloved houses from the Wilhelminian era were less well-known, which were, at least in Bremen, nowadays sought as residential objects of the city due to their construction with bay windows and winter gardens. Partially reminiscent of the so-called New Towns in England, one finds in the research that the actual origin is to be found here. The Bremer Haus is a type of terraced house, which has its roots in the development of new large cities around the center of London.

The Bremer Haus was designed for all social groups of the population, in various sizes and in a slightly displaced way, and from the middle of the nineteenth century to the 1930s it was home to Bremen. In the course of the great demand, the streets of Schwachhausen, Steintor, Ostertor and the Neustadt have been used as a whole. Here one finds mainly the somewhat elaborate, large type of the Bremen house, which were erected for wealthy citizens. High ceilings, stucco work on completion, generous winter gardens and stairways, as the living room is mostly above the basement built as a half floor, are typical details of these terraced houses. In the laboratories such as Walle and Gröpelingen one finds the smallest type of these terraced houses with 1-2 full floors and lower storey heights.

We used our presence in Bremen to get to see some samples together with Laura, who has just moved into a street with the beautifully painted, so typical Bremen terraced houses, in order to look at these buildings a bit more closely. First of all, we are surprised by the brightness in the rooms, which are excellently exposed on the winter gardens. Looking out of the window into the interspace between the row houses are to see small gardens are to see, which are more or less green by the respective inhabitants, here in Bremen rather green, planted with lovely flowers. Even balconies are often covered that one meets a sea of plants and flowers, even at the beginning of October.

Also on the road side there are small front gardens, so that the feeling of too tight and too dense cultivation does not necessarily arises. The many different color schemes make a significant contribution to the well-treatment of the user. Of course, the many cars actually disturb the image of the idyll in the narrowly cobbled cobblestone streets, but can not be changed in our society anymore. Partially, there are still so many bicycles parked, which one hardly dare to imagine the number of inhabitants in the street train. But it is fun to look at color design, creativity in the garden and entrance design, which allow so many, certainly often wrong conclusions. Green and blossom, the almost already obligatory seat for the Bremen Klönschnack, simply magnificent.

We also learned something special on Sundays, because there were countless articles to give away on the citizens' dough. Here on Sunday the items are placed in front of the house, which still hopefully functionally and undamaged to hope for a new owner. The passer-by takes them, if he has found pleasure in it, sometimes it is a coffee pot, then an iron. A great idea, recommended for imitation.