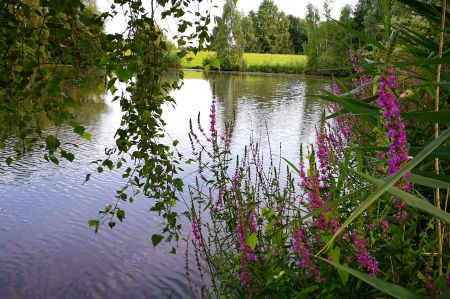 Once again, we were visiting Laura and Jan, so we had the opportunity to explore the unknown and interesting terrain in the area around Bremen again, which was to lead us to the nature reserve Ochtumniederung.

The Ochtumniederung at Brokhuchting is a nature reserve in the district of Huchting as well as in the district Strom of the city municipality Bremen, which can be reached by the city center very well by bike or public transport. We recommend the parking spaces below the B 75 / Oldenburger Straße at this point, as these also form the parking station of the Park & Ride System.

Just below the bridge at the parking lots we begin our walk, which first leads us to the dam along the Ochtum river. In the nature reserve, there are several, partly created, still waters as well as old water ways in the area of ​​the old Ochtum river bed, which partly have surrounded by tall trees and thus provide the water birds with a lot of shelter. The nature reserve is very strongly characterized by wet pastures and wet brooks with swampy zones, reed beds and floodplains. The surrounding meadows are partially used extensively as grassland. In the north-west of the protected area, a polder is laid out as a flood area for the protection of residents along the river. In the winter months, the meadows in the protected area are also often completely flooded. The conservation area is of great importance for resting water birds and waders on their flights to the winter quarters. The area also has a special significance as a breeding area for birds. 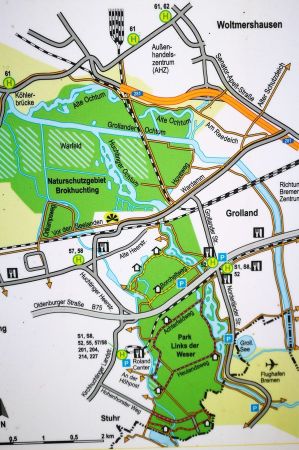 Today's nature conservation area was a relatively dry and largely intensively cultivated area in the 1980s. In the course of compensatory measures for the development of commercial areas in the vicinity of the Neustädter harbor, where the fencing was lost, the use of the area was extended and arable land converted into grassland. Since the middle of the 1980s flooding areas, ditches and still waters, wet pastures and wet breaks have been created. The further agricultural use of the land was then extensively carried out. The area experienced a further appreciation at the end of the 1980s, when the Ochtum was relocated in the course of the expansion of the Bremen airport, and was reorganized in a natural way.

In the nature reserve, there are a number of observation platforms for natural observation, such as a viewing platform on the southern edge of the floodplains, as well as two observation hills near the Ochtum river in the southeast of the Ochtumniederung.

On the way we met some walkers, who have found the wonderful circular route in the nature too. Many cyclists are also on the road by using the paved, better mostly asphalted path on the dam system. Several times we met a skater, who also used the great circular path for his sportive rehabilitation.

We enjoyed the circular route, which always offers different perspectives on the Ochtum river, a natural paradise on the outskirts of Bremen.

We have 455 guests and no members online