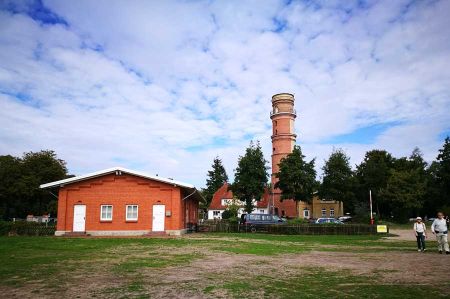 Our exploration together with Micha had also led us to the old lighthouse of Travemünde, which unfortunately almost disappears in front of the monstrous backdrop of the Maritim skyscraper today.

In its present form, the red brick tower was built in 1827 in classicist style and has a proud height of 31 m. It is divided by five cornices, has a small balcony at half height as a pilot lookout (formerly the pilots were on the lookout for incoming ships) and in the upper part a narrow, revolving platform.
The first documentary mention of an already existing port sign in Travemünde is contained in the Lübeck Reich Liberty Letter from 1226, when Kaiser Friedrich II. assured the imperial immediacy of Lübeck. The first reference to a beacon at the mouth of the Trave is documented for the year 1316 in the files of the Council of the Hanseatic city by mention of a lighthouse keeper (Latin custos lucerne). 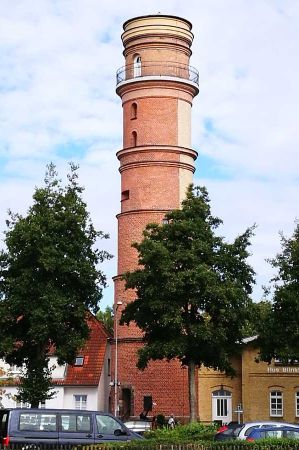 For the first time, a massive lighthouse in Travemünde was built by Dutch bricklayers in 1539 using red bricks. In 1827, the lighthouse was hit by lightning, due to its fire the tip completely burned down. Since then it stands in the present form. In 1903, the beacon was switched to electric light. It is thus the oldest preserved lighthouse in Germany and since 1922 a technical cultural monument.
The Old Lighthouse Travemünde serves as a maritime museum for beacon technology since 2004. On the stairwells and on the eight floors are pictures of lighthouses and lightships as well as sea lanterns and beacons. Halfway up, you can visit the pilot lookout to the Baltic Sea. On the top floor there is a narrow balustrade around the tower. From there, you can enjoy a panoramic view of the Baltic Sea, Travemünde, Priwall, Passat sailing ship and ferry traffic.

In 1903, the beacon of kerosene lamps was switched to electric light with carbon arc lamps. From 1937, a cylindrical concave mirror (1.2 m wide and 55 cm high) reinforced the light of the incandescent lamp, which replaced the arc lamp of 1903. For quick replacement of defective lamps, there was a lamp replacement device with lamps 1000 W / 24 V. The nominal range was 16 nautical miles. Two otter apertures gave the left side a flash flag (1 s bill + 2 s pause = 3 s return) and the right side a flash group ID. In 1954 and 2004 conservation measures were implemented.

On the top floor, which can be reached via 142 steps, the functional system of the old Travemünde lighthouse with its 1000 watt incandescent lamps has been preserved. Tower and museum are open for visitors.

Maritime Skyscraper and the New Beacon 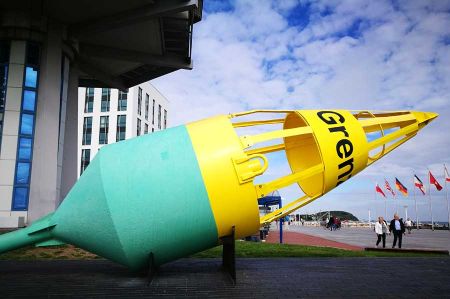 The Maritime Tower was built in the early 1970s. With a height of 119 meters (125 meters overall height), it is the tallest building in Schleswig-Holstein and the entire German Baltic Sea coast. The new beacon on the 36th floor of the skyscraper was put into operation on April 30, 1974 and is one of the highest beacons in Europe with its 114.7 m fire height. The white / red light signal flashes every four seconds in a northeast-facing sector towards Lübeck Bay.