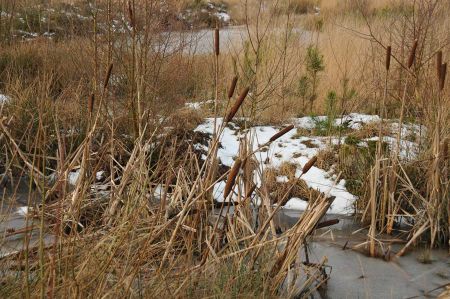 Due to local law situation and in return for huge amount of new construction areas, other areas have to be given back to nature as green land.

One of these given back to nature areas should be in the forestry Upjever located west of Schortens, a few kilometers away from the city limits of Jever. With its present size of about 740 hectares of mixed woodland, in which the proportion of softwoods predominates, the woodland offers cyclists and walkers various lengths optional tours that lead through various vegetation zones. These circular hiking- or biking routes can be combined and one of the restaurants at the way can be used as a stopover for lunch or coffee break.

Today's tour is leading us from the Forsthaus (as the name already says, a former forester, now restaurant) to Brauner Hirsch (Brown Deer) (former farmhouse, now restaurant), at least because of renaturalization fields apply along the way. The forest has an area of approximately seven kilometers in length and about three kilometers in width. The selected trail has a length of 11 kilometers. On the southwestern edge of the forest, the 43 hectare nature reserve swamp of Dose is connected.

In the Middle Ages the area came into possession of already existing town of Jever. Until 1551, there was a huge farmhouse with sheep on the site. In this time local authorities started with the reforestation of the woods. According to reports of a priest from Waddewarden called Braunsdorf based in the collected messages of domination Jever, the first acorns were self-sown by Fräulein Maria (Miss Mary) of Jever. The forest initially consisted of oak and beech.

During the French occupation of the country, the woods of the forest were plundered for attachments on the islands of Wangerooge, Baltrum and Heppens which decimated the trees immense. It took until 1823 till the forest has been reforested. Early 20th century the forest covers an area of over 1.000 hectares.

In the 18th century there were more than 20 different lakes in the forestry Upjever that were not economically usable for people at the time and therefore were considered "Unland". The waters were drained and the land was reforested step by step. The waters disappeared and thus the diversity of plants and animals.

With the initiative of the forester Carsten Friedrich Streufert in the forest management plans were made to reconvert parts of the coniferous forest back into a moorland. The plans could never be carried out, however, just with search for possible renaturating lands and identified as one in the late 1990s, compensation areas for major projects such as the JadeWeserPort or the new power plant in Wilhelmshaven, the idea turned back. With the help of these compensation areas plans to renaturating could be financed.

The last two ice ages - Saale and Weichsel ice age - the relief of Upjeverschen Geest was characterized. In that time, the typical inland waters in northern Germany were seen as lakes but got much more impressive names, f. e. Zwischenahner Meer (at least a lake) or Krick Sea, they were named especially because of here living fens teals. Since mid-18th century extensive drainage works were carried out in order to reduce the existing peat here.

Covering an area of 24 hectares, the system of lakes, formerly characteristic for the forest of Upjever, were restored. In this compensation area typical habitats such as standing water, wet heath, marsh and scrub birch and oak forests aroused. Thus habitats for animals and plants such as sundew, peat moss, green sandpipers and peat moss were created.

Meanwhile, three restoration projects have been implemented or initiated in the forestry. In 2005, the first section had been turned back into a bog in the Krick Sea. The runoff was deliberately prevented and so the water level rose from the bottom again. From 2010/2011, the second part of the Krick Sea was again freed from softwood and restored as a Moor.

The third restoration project is the so-called Engel Sea. The Engel Sea is a corridor designation at the spot where the Mühlenweg in Schortens merges into the forest of Upjever. In this place there was an area of water in the Middle Ages, in the beginning of the Christianization it was used for the baptization when people were laying or standing half in the water. On maps from 1779 and 1844 you can still find the lake. The Angel Sea was still drawn. From 1806, the area was drained and planted with conifers.

The project for the restoration of the Angel Sea was launched in the fall of 2008. On an area of 8 hectares, the forest administration began to restore the old sea back to its original form as a moor area with open water.