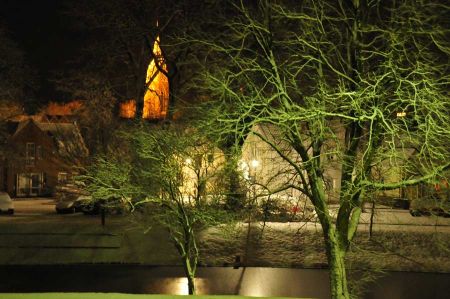 Regardless from which side of the old town of Jever you are approaching, always the bell tower as the second tallest building in town is in the center of the image.

And as with many Frisian Churches, the bell tower in Jever has been built separately next to the church. The reasons for this is related with history of construction possibilities; especially here there were problems of static due to high groundwater level. The bell tower of Jever stands levels at a height of 12.56 m above the sea, but more on that later.

Approximately 30 m next to the present bell tower - very close to the house "Am Kirchplatz Nr. 7 - there was a first wooden belfry from 1564 to 1877. In the churchyard of today only one cornerstone is visible, about 80 cm reaching out from the ground. The first clinker tower was built with a height of 20 meters in 1876. During first excavation for the foundations the constructors found out, that instead of the planned 1.50 m depth, they had to excavate down to 6 m depth, because here the sandy layers carrying the construction started. During the centuries the church hill was further piled up, so that today's level of 12.56 m above sea was achieved. During the foundation works the constructors found out, that 3 older cemeteries were layered on top of each other.

In 1900 a new chime for the bell tower was purchased. Responsible people had the dream that the tower should also be constructed higher. After an architectural competition in 1902, the tower should grow to 52.60 m and the redesign of the facade has been decided too. Because of these constructions, the tower remains, in absolute amount, with 65.15 m based above sea - 1.76 meters below the Grand Ducal Castle Tower of 66.91 m above sea.

The wall thickness of the ground floor is 1.72 m and tapers upwards up to 52 cm. On 18 July 1902 the Contractor L. Neddersen from Hannover / Wilhelmshaven, commissioned the offer price of 18,300 Mark for the construction. On July 28, 1902 under the supervision of the architect H. Bomhoff from Westerland / Sylt started construction work. Despite rain and storm the tower was completed on November 1, 1902.

In the tower there are 4 bells: a small prayer bell, from 1727 cast of Mamme Fremy, with the inscription "The little one has the greatest honor, the Great buzzing after it", as well as a special treasure the bronze "Maria Bell". Originally cast by Bremer Glockengießer Gert Klinghe for the Church in Eggelingen in 1461, it was in year 1540 - after a feud with the Ostfriesen - marketed as "booty" to Jever. Every evening it heralds in the summer at 22.00 and at 21.00 in winter - the so-called Marie Ring". This bells were placed in the times of Mary and should show the end of the day and the beginning of the night's sleep to the citizens of the city. The sound of bells today is complemented by 2 large steel bells. These were poured in Bochum in 1955, as a substitute for the remelted ones during WW2 bronze bells.

Close to the bell tower another event occurs twice a week: Every Tuesday and Friday Jever´s Church Square turns to a kind of Schlemmermeile: called "Weekly Market".

The weekly market is considered one of the most beautiful in the north of Germany. A must go for any visitor! Variety, freshness and quality is very important here. Fresh vegetables, organic products and countless flowers, plants and rare plants, you will find on the colorful market. And that's not all: The weekly market is also a meeting place for young and old. Many chats and exchanging of news will be held here - from hustle no trace, every Tuesday and Friday from 7.00 until 12:30.

Jever - city troll along the gardens and parks around the city