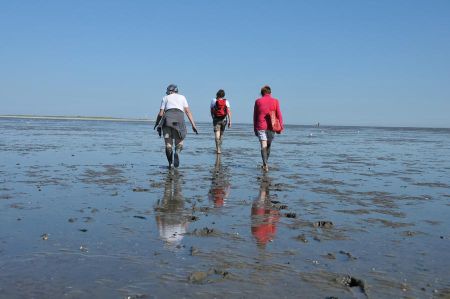 Once you have arrived in the northern part of Germany, a hearty wadden sea area hike should of course not be missed by Brita and Gerda during the travel program with alaturka.

The tide calendar of the Wangerland spa administration clearly indicated Sunday as the best hiking day, because with the high water already at 8.15 a.m. in the morning, there was enough time for the day trip until the evening high tide, without worrying too much about heavily filled tidal tideways or overflowing water had to make water. After all, the distance to the Minsener Oldeoog is more than 7 kilometers across the Wadden Sea.

Ever take part in a guided waddenarea hike 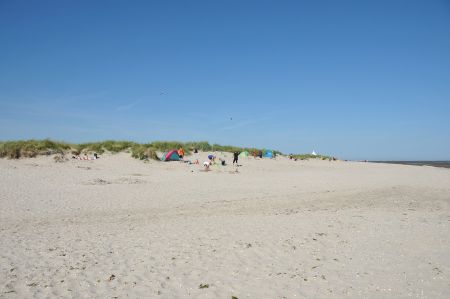 At this point we would like to mention that such a mudflat hike harbors certain dangers, which lie both in the timing and in overestimating one's own abilities with regard to the long way through partly muddy terrain. Scheduling alone can create huge problems if flood times are not well known. Starting too early when the current in the tidal creeks to be crossed is still too strong involves a certain danger that should not be underestimated. However, our employee had walked this path more than 100 times over the years, so we could confide in him. With regard to the Minsener Oldeoog, as a holidaymaker you should only ever take part in one guided mudflat hike. Despite good visibility, you lose your orientation too quickly due to sea fog that suddenly appears, and the risk of injury from shell cuts in the mudflats is too great, especially if you are alone or in twos. If these points are observed, the mudflat hike is probably one of the most beautiful leisure experiences imaginable.

We left the area on the beach at Schillig, which had been washed up years ago, around 10 a.m. and first walked along the sandy beach in the direction of Wangerooge. After about a kilometer on the beautiful sandy beach, which was already well frequented at that time, we went into the Wadden Sea. Unique in the world, the entire Wadden Sea area along the North Sea coast is now a World Heritage Site, so the habitat for flora and fauna determined by the tidal range is also unique. Of course, the "landlubbers" immediately noticed the small, worm-like piles of sand that are in huge numbers in the Wadden Sea. After initial, incredulous astonishment at the brisk activity of the local lugworms, Brita and Gerda then also dared to touch the pile of sand with their feet. The first crabs, or as they say here on the coast, "garnet" were quickly spotted. In general, only a few clues are needed and you are right in the middle of explaining this phenomenal natural area. The structures on the surface of the mud flats alone, caused by the movement of waves in the sea, are worth looking at, the patterns are so interesting and sometimes playful. 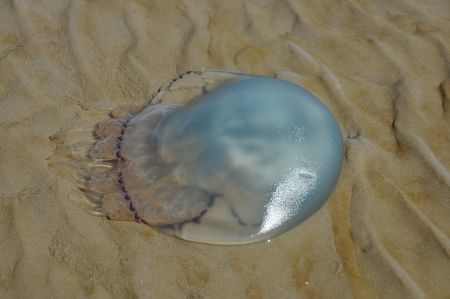 A little further on in the mudflats we came across the still existing shipwreck of the barge that ran aground there about 40 years ago, but which is gradually falling apart. Today it is an attraction for many tourists who like to come there to take their souvenir photos. Our path then leads us in the direction of the Mellumplate lighthouse, which is far out at the entrance to the Jade Bay and which, as an unmistakable sea mark, is unmistakably a good sign with its drawing. On the way there are first shell fields, which can cause small cuts in the soles of the feet for the unfamiliar mudflat hiker. We also find a number of ink jellyfish on the way to Minsener Oldeoog, which were unable to reach deeper zones in time with the draining water.

Of course, there are also some muddy areas from time to time, which are only entered with a little reluctance at first. However, when the quite healthy contents of the mud flats and even the silt applications were reported, which are offered by the local institutes for a fee, the reluctance was over and quickly at least the legs were smeared black with silt, which then turns greyish and dries on the skin. The hike went by without ever feeling bored or monotonous. Alone the observation of the brisk ship operation when entering the Jade, the Weser and, due to the excellent visibility of the day, even the Elbe offered plenty of variety. 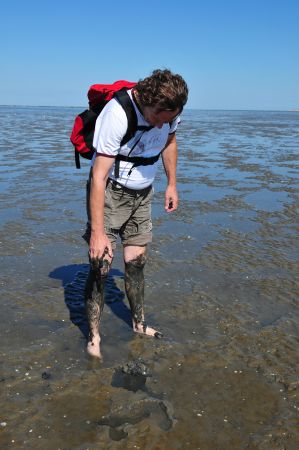 As the duration of the mudflat hike increased, so did the interest in the beacons, so that the significance of the beacons at Mellumplate, Roter Sand and Alte Weser were described in detail. So we quickly arrived at the terms of starboard and port and the associated colors of the ship's lights, which were sketched on the mud flats for better understanding and during the night even without radar can be seen in which direction a ship is moving.

We had now arrived at the Prickenweg in front of Minsener Oldeoog, which still had a fairly high-water level, so we reduced our running speed a little and observed a sailor using the Prickenweg to let himself fall dry in front of the Vogelschutzinsel. The Prickenwege in the Wadden Sea area serve as a sea route for shipping to reach the port they are headed for, because they are often deep enough for smaller seagoing vessels to be able to navigate through the Wadden Sea area even when the tide is out. A little later we also crossed the Prickenweg in front of the bird protection island and at the end of the way there we had to cross a small silt field to the amusement of everyone until we reached the bird protection island Minsener Oldeoog. 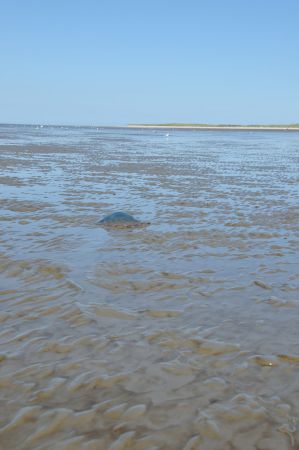 Like Mellum and some of the other islands off the coast, Minsener Oldeoog is a bird sanctuary with thousands of seabirds of all kinds, which may not be entered at all during the breeding season. Only the sandy area by the sea is available to visitors as a rest area or to look for mussels or other flotsam, which Brita and Gerda also used extensively to select mussels. A narrow path leads to the highest point on the island, which as a vantage point also offers a good view of the neighboring island of Wangerooge.

Of course we had taken some provisions with us, so that we could now enjoy a hearty "snack" far out in the sea with a wonderful view of the mainland. The length of stay on the island is limited solely by the tidal range, because after only about 8 minutes of standstill with the lowest water level, the tide reverses and the water comes back. As already mentioned at the beginning, this is where the greatest potential for danger lies, because the tidal creeks fill up first and then form a strong current that has to be crossed even if the way back is too late. We also had this point in mind and made our way back in good time, which now led us along the incoming water roughly in the direction of the oil pier in Wilhelmshaven, enough time to observe the seabirds or take a few more photos.

Despite the relatively rough wind, there were some brave swimmers who dared to swim in the sea. It was just too cold for us southerners today. Once back at the sandy beach of Schillig, we went to one of the washhouses to wash the remains of the silt off our legs. Back at the car we went back to our current location in Jever. An interesting and at the same time relaxing day in the fresh air with a multitude of impressions and experiences came to an end.