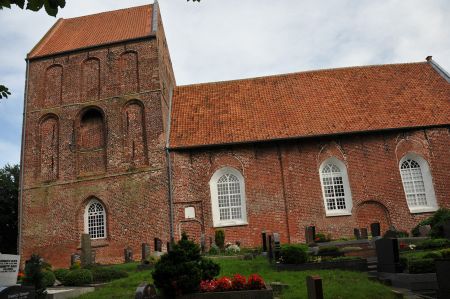 We were coming from Jever via Aurich on the B 210 to Laura, who has been studying in Emden for some time, when we came across the Leaning Tower of Suurhusen.

Our interest was aroused immediately and we turned right off the main road into the town of Suurhusen. The well-designed parking spaces already indicated something special and so we were not a little surprised when we came across the copy of the entry certificate in the Guinness Book of Records right at the entrance, which clearly states that the Leaning Tower of Suurhusen has a greater incline than the more famous Leaning Tower of Pisa. But who knows Suurhusen in Ostfriesland.

The first documented mention dates back to 1255 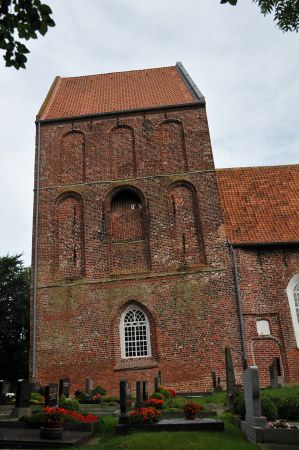 Today, with around 1,100 inhabitants, the town of Suurhusen belongs to the municipality of Hinte in the district of Aurich, only around 5 kilometers north of Emden city centre.

In contrast to the nearby towns of Osterhusen and Westerhusen, the town was formerly called Zuiderhusen (Southern Husen).

It was first mentioned in documents in 1255, but a stone found in the church tower of Suurhusen with an inscription from 1004 indicates that the place is much older.

The remains of pottery that have been found also point to the earlier existence of the Suurhusen settlement.

The nave shortened by a quarter 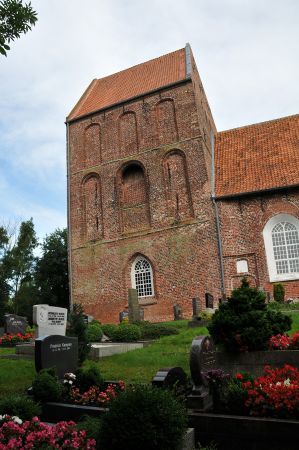 Immediately after entering the church complex, which in typical East Frisian style is slightly above the normal level of the landscape, the viewer notices the similarity to a fortified church, which in the typical style of construction hardly shows any openings on the ground floor.

In addition to using the church as an escape room from raids, this type of construction also offered a certain degree of protection from the North Sea floods, which were still feared at the time.

Display boards show that construction began in the first half of the 13th century. The building was originally 32 meters long and 9.35 meters wide.

For reasons that are still unknown, the nave was shortened by a quarter around 1450 and the church tower, which is still preserved today, was placed on top of it.

Leaning Tower of Suurhusen in the Guinness Book 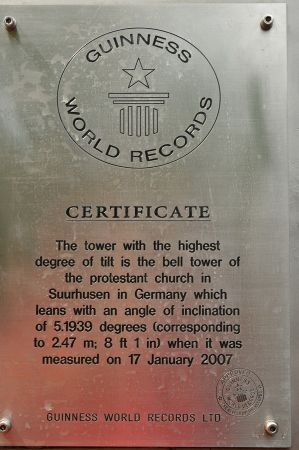 This church tower, which with its height of 27.37 meters can be seen far beyond the borders of Suurhusen, became the main attraction of the place.

Precise measurements of the tower have revealed an inclination of 5.1939°, which is clearly more inclined than the inclination of the Tower of Pisa, which can only have 5.08°.

Accordingly, the Leaning Tower of Suurhusen is listed in the Guinness Book of Records as the world's leaning tower.

At the time of construction, the church was usually built on oak logs that had been placed in the ground to distribute the load. 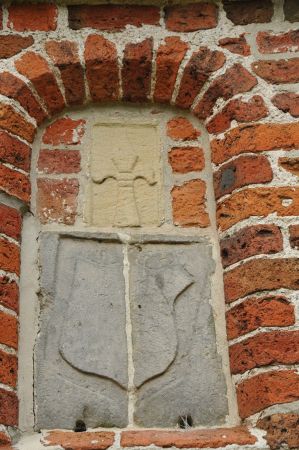 This founding practice used to be very successful in the marshland.

As the groundwater level was lowered more and more over the centuries due to the construction of the canals, especially due to the Knockster Deep, oxygen was able to get to the oak wood, which enabled the wood to rot.

This resulted in the loss of force distribution in the ground, so that the church tower began to tilt.

Today, the foundation is secured by concrete bored piles, so that the tilting process could be completed.

A small museum in the middle of the village 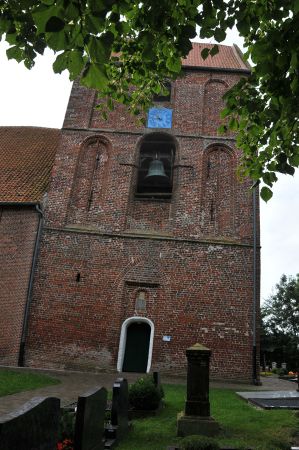 Thus, a safe entry of the church and the surrounding area is possible without danger. Our tour around the church illustrates in a special way the church tower, which can really be called extremely crooked, which is particularly noticeable in the wall opening at the church tower bell. A worthwhile stop on the B 210 federal road to Emden, which has an additional attraction with a small museum in the village center, a farm worker's house in which the life of people from earlier times is illustrated.

The goal of today's bike tour - the Imperial Palace of Memleben

From Ahrweiler to Osnabrück - stroll through town