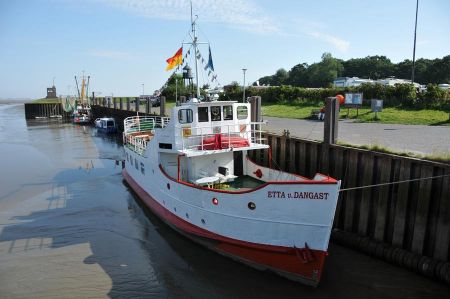 For the following Sunday morning we had decided to take a short trip to Dangast, which is known far beyond the national borders and well attended due to the Kurhaus with its cultural events and the almost legendary rhubarb cake available there.

Dangast is part of the city of Varel, is located on the south-western Jade Bay and can be easily reached by car or, much more conveniently, by bicycle, because you can cycle from Mariensiel along the dyke to Dangast. 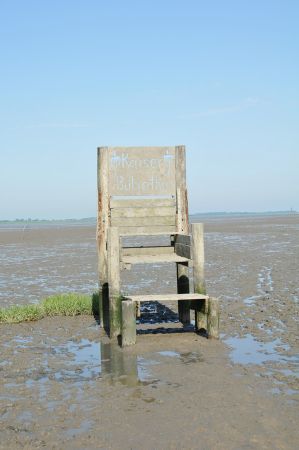 For a number of years, Dangast has also been a popular place of residence and meeting place for artists who have learned to appreciate the somewhat more open mindset of the local population. Between 1909 and 1912, the expressionist painter Karl Schmidt-Rottluff lodged in the former "Parkschloss" to work there, while his colleague Erich Heckel took up quarters in the "Hullmann'schen Haus". From 1950 until his death in 2002, the painter and photographer Willy Hinck lived in the house formerly known as "Villa Wobick" at "An der Rennweise 42". The remains of the Beuys students Anatol Herzfeld, Wilfried Gerdes and Eckart Grenzer can be found around the Kurhaus. In 1970 the painter Trude Rosner-Kasowski, who lived in Dangast, died. From 1923 until his death in 1983, the painter Franz Radziwill lived in the house on Sielstrasse in Dangast, which is now an art museum. When in 1984 the sculptor Eckart Grenzer carved his 3.20 meter high phallus directly on the beach of Dangast in front of many spectators, which received the title "Encounter of the Sexes", Dangast was the focus of all media. On the occasion of the Expo am Meer in 2000, the so-called sculpture path was created along the cycle path on the sea dike from Mariensiel to Dangast. The seven sculptures, created by 7 different artists during a sculpture symposium, represent the 7 days of the creation story. 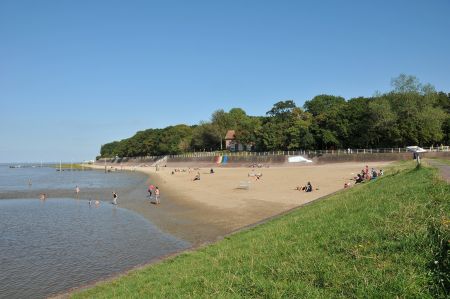 Arriving in Dangast, the first course inevitably leads us to the harbor basin, where the ferry boat "Etta von Dangast", which can also be described as legendary, has fallen dry on the silt that can now be seen.

Unlike most ports on the North Sea coast, the port of Dangast is tide dependent. Now only a little residual water flows out of the harbor basin, which receives some inflow from fresh water from the Ellenserdammer Deep.

The fairway can now be seen from afar, which must be navigated during high water through the pricks set up in the mudflats. Right on the dyke of the outer harbor we come across the stone monuments, which, to commemorate the strong floods, convey not only the year but also the respective water levels. 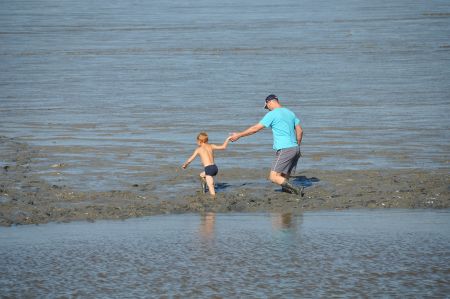 During the second Marcellus flood of 1362, the first settlement of Dangast was almost completely destroyed, which also meant that the ancestral seat of the Frisian chieftain family Wimekinge was lost. The Wimekinge family included Edo Wiemken the Elder, who was chief of Rüstringen from 1378 to 1415. His monument in the church of Jever is almost a must for the culturally interested traveller, the carvings on the tomb are so wonderful.

After this great flood disaster, Dangast was rebuilt on the southern slope of a ridge in a flood-protected place. This decision can still be felt today, because due to this exposed location, Dangast does not need a sea dyke, so that an unobstructed view of the sea is guaranteed. Another plus in the list of Dangast's special features.

Nevertheless, Dangast was also badly affected by the severe flood disaster of February 16th and 17th, 1962. Large parts of the beach were torn away, nearby buildings were badly damaged and the racing pasture was completely flooded. The height information on the memorial stones at the harbor alone makes the power of the tide clear. 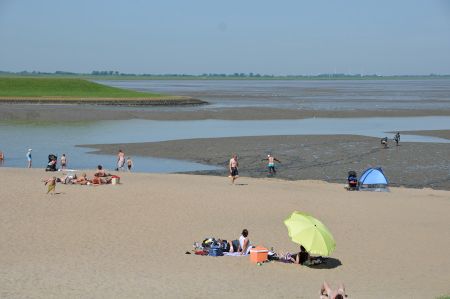 Our path then leads us over the summer dyke to the beach of Dangast, which begins directly below the Kurhaus. Already at this early hour, the first guests have arrived, armed with beach mats and bath towels, waiting for the high tide.

Due to its location, the Wadden Sea in front of Dangast is very muddy, which is why only a few very brave people go on a mudflat hike to the fairway.

A colorful mix of guests who come here with families and dogs. Of course, the phallus right on the edge of the silt is still an eye-catcher, as is the throne for the respective silt queen, a wooden construction that is used for various activities, including the legendary sludge sled race or when the action group "Menschenmüll" with their "Wattgolfen" becomes active. 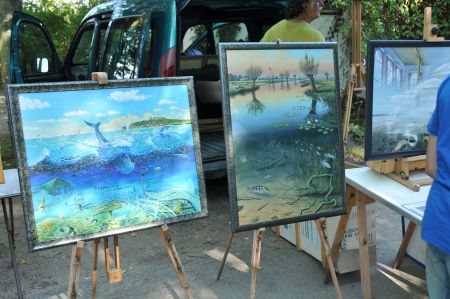 Meier's travel guide from 1904 says something about the prevailing mentality here: "You stay in one of the three lodging houses, all of which belong to the same owner...". There is something special about spending the day in Dangast, whether on the beach, in a café or in the Kurhaus, which then magically attracts us.

We leave the beach and stroll past the stalls, which offer art as well as the usual all sorts of things. So there is the woodcarver, who creates wonderful sculptures from driftwood in combination with other materials, then the painter, who in the best M.C. Escher style integrated several horizon lines with motifs from Dangast and his imagination into his pictures.

Of course, there are also all kinds of culinary delights on offer from the retailers.

Piece of rhubarb cake with cream 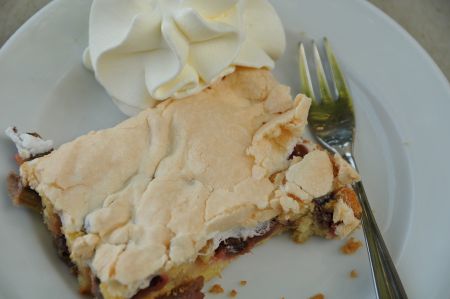 We now finally enter the Kurhaus, which has already been mentioned several times. In the same hands for many years, the Kurhaus has not only a large number of musical events but also art that you can touch. Many local artists use the popularity of the Kurhaus to draw attention to their objects. However, we are now more interested in a coffee and especially the piece of rhubarb cake with cream. A pleasure that is second to none. And all of that on the wonderful panoramic terrace of the Kurhaus with a view of the Wadden Sea and the rising tide.