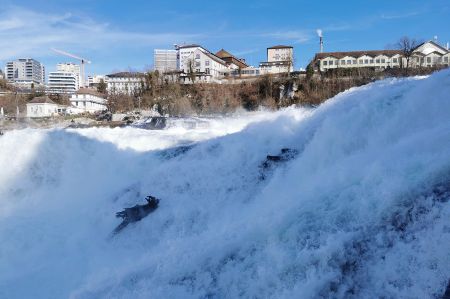 Coming from Zurich, our route again led past the Rhine Falls, which, at 23 meters high and 150 meters wide, is probably the largest and most water-rich waterfall in Europe.

Just a few kilometers from Lake Constance, the Rhine Falls are one of the main attractions on the route between Zurich and Stuttgart. Since this time we came from Winterthur, we were on the other, the southern side of the Rhine, which we hadn't visited before. Located west of the Untersee in Switzerland, the Rhine Falls always attracts numerous travelers who have the fascinating view of the masses of water between the rocks from several platforms.

Stop at Laufen Castle to the waterfront 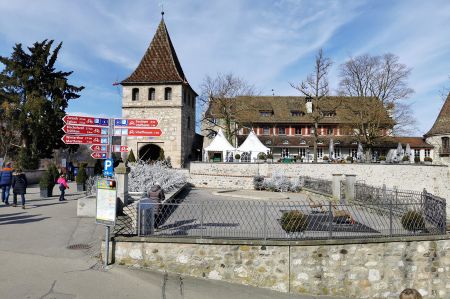 Laufen Castle is located on the left bank of the Rhine in its section between Lake Constance and Basel on a steep cliff above the Rhine Falls and thus offers a view over the Rhine and the waterfall. We reach Schloss Laufen and the large car park just a few hundred meters after leaving the motorway. A footpath leads from the castle to the Känzeli, where visitors can see the Rhine Falls up close. There is even a SBB stop directly below the castle, where the S12 and S33 from Winterthur to Schaffhausen stop.

The paths at Schloss Laufen were renovated in 2008 and even a glass elevator was installed. Parts of the paths - the so-called adventure path including the viewing platforms and the lift - are now subject to a fee. The Rhine Falls are regularly illuminated by a lighting system in the evenings, but not all year round. In 2013 it was visited by 1,300,000 visitors.

The long history of the castle at the Rhine Falls 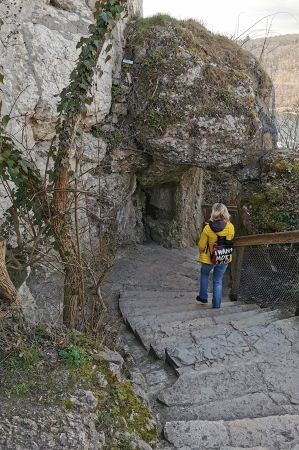 The first documented mention of Laufen Castle dates back to 858 AD. The castle was the ancestral seat of the Barons of Laufen. The lord of the castle or his bailiff was responsible for the bailiwick of the neighboring communities, while the landlordship belonged to the bishop of Constance. In 1544, the city of Zurich acquired the castle. Major structural changes were made between 1544 and 1547 under Zurich rule. During the Helvetic period, feudal rule came to an abrupt end when the French invaded in 1798. From 1799 to 1804, Johann Heinrich Bleuler the Elder established a painter's studio here. His son Louis Bleuler opened the Bleuler painting school in 1830, first as a tenant and in 1845 as the owner. In 1941, Laufen Castle became the property of the Canton of Zurich. Today there is a restaurant in the castle and a youth hostel until October 2019. 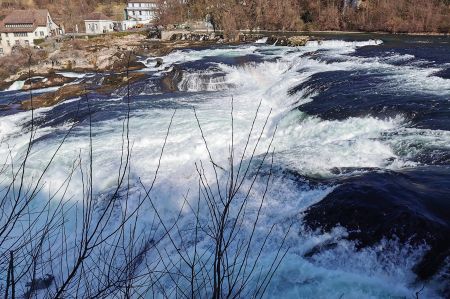 At the Rheinfall there are several restaurants and snack bars in all price ranges. The Adventure Park Rheinfall rope park above the Schlössli Wörth offers a special view of the Rhine Falls. Smilestones, the largest miniature world in Switzerland, shows the Rhine Falls and other Swiss sights and landscapes on a scale of 1:87 (gauge H0) in a former SIG workshop near the Neuhausen Rheinfall train station.

There are several paths on and around the Rhine Falls: 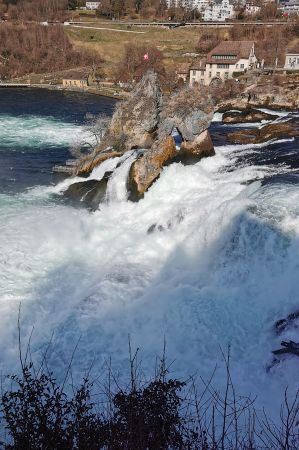 Since the 1970s, heavy foam formation has been observed below the Rhine Falls in summer, and the plumes of foam can still be seen from miles away. Studies by the cantonal authorities have shown that the feared water pollution from detergent residues or other waste water is not involved. In his doctoral thesis, Christian Wegner from the Friedrich Schiller University in Jena demonstrated that the cause of the foam is to be found in the flooding buttercup (Ranunculus fluitans). 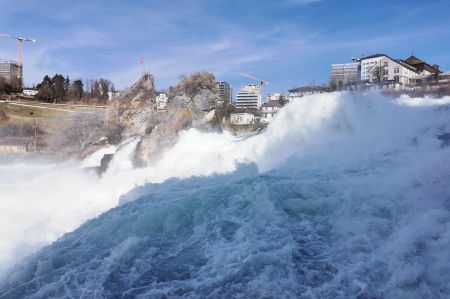 Wörth Castle is located at the Rhine Falls basin in Neuhausen am Rheinfall. From here you can take excursion boats close to the Rhine Falls and also be dropped off at the rock in the middle. The ascent to the viewing platform with a waterfall up close is via narrow and steep stairs. In addition, small and large Rhine Falls round trips as well as the translation to Laufen Castle, which is used on the Zurich side in Laufen and, among other things, by a youth hostel.

Night tour through the old town of Nuremberg