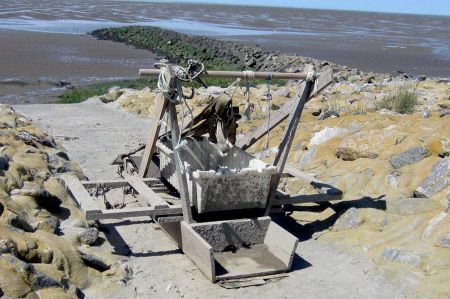 We discovered a strange-looking vehicle on the Pilsum dyke during our tour with Laura von Emden along the coast: a mudflat or mud sled, which is also called Kreier here in the region.

The vehicle, which looks quite strange at first glance, is made entirely of wood and is constructed almost like a sled. Comparable to a load sled from the mountains, the Kreier consists of a substructure that has a sliding surface, and then a structure in the upper area that you can hold on to while kneeling or standing. Typically, the user kneels on the sled with one leg and pushes off the ground with the other leg. Despite the weight, the sled glides over the heavily water-logged mudflats. The further structure is usually dependent on the function or, better, on the use.

Once a transport vehicle for fishermen in the Wadden Sea 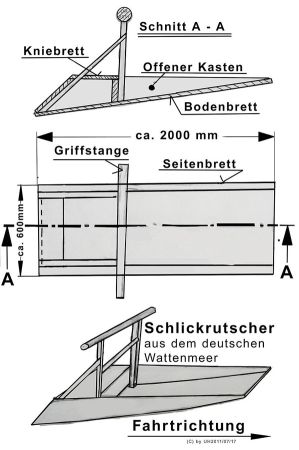 The fishermen on the coast used to use the mudflat sleds to get to their laid out fishing traps in the Wadden Sea, which they had set in the filling tideways at the beginning of the rising tide. After the high tide, the traps had to be emptied if fish had strayed into them. If the fisherman did not do this in time, his catch would usually have been stolen by seabirds. For the fisherman, this usually meant getting back to his traps in the tidal creek as quickly as possible after the high tide. The best way to do this was to use the Kreier or mudflat sled, because walking the way was long and very difficult, as you sink deep into the mudflats with every step. An experience that Brita and Gerda also experienced shortly before Minsener Oldeoog. The fisherman then filled his hunting booty into the superstructure of the sled so that the catch could then be transported home safely. 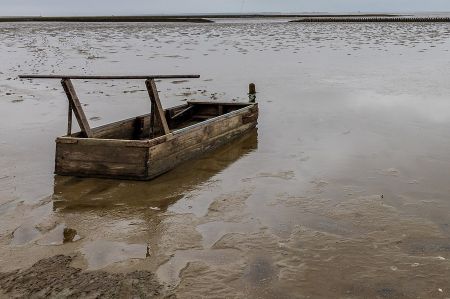 Today, fishing with pots is forbidden due to the strict nature and animal protection regulations in the Wadden Sea, so the makers have had their day, one might think. Not correct. In the two East Frisian towns of Pilsum and Pogum, people have remembered the quaint companions and developed something like a local championship in sports from them: mudflat sled races. The Kreier used then, however, usually do not have the heavy construction of the fish tanks, but are otherwise identical in construction to the watt sleds used earlier and now serve as original sports equipment in the competitions held.

Once a year, the Kreier race from Pilsum and Pogum takes place in East Friesland, which is now known far beyond the national borders and attracts thousands of visitors. An additional attraction for the tourists, because most of them have never seen such vehicles before and certainly not in use as racing equipment. The annual date of the event varies due to the tide times, but can be requested from the local organizers.

In the Wursten region near Duhnen, Erhard Djuren is one of the last people still practicing this trade. His creator is bred by three Labrador crossbreeds (mustard dogs) that Erhard Djuren breeds himself.

The term “mud slide” for boats or ships, derived from these means of transport, is to be understood all the more pejoratively, the larger the watercraft referred to in this way is.

Dangast – culture and rhubarb cake in the Kurhaus