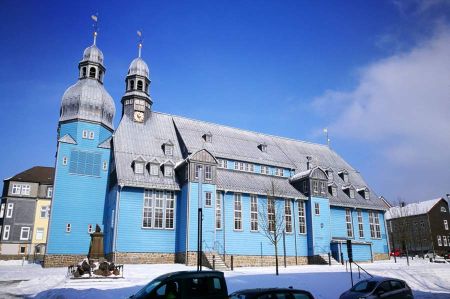 After driving along the Oker Reservoir we had driven up to the mountain town of Clausthal-Zellerfeld, where we wanted to look at the now fully restored Market Church of the Holy Spirit.

So many people will think and say, oh, what can be so special about a small town church that you should drive a certain distance for it. However, one should know that the Evangelic Lutheran Church of the Holy Spirit in Clausthal-Zellerfeld is the largest wooden church in Germany and due to its architecture and interior design is one of the most important architectural monuments of North German Baroque.

Many ecologically "green" people have already come to terms with the idea of ​​modern timber construction when planning their future home. Great are the advantages of ecological construction with sustainable raw materials such as wood and wood-based materials while accommodating opulent thermal insulation, which is too easy to accommodate in the wooden frame. Thus, in a simple way, full heat protection can be achieved, which brings an immense monetary benefit for life, especially in times where the heating cost spiral begins to turn faster. Great skepticism still exists from the traditional massif house representatives regarding the durability and longevity of these wooden houses. It is precisely these arguments that can be very well counteracted with the example of the Marktkirche of Clausthal-Zellerfeld, since the building dates back to 1642!

Wooden arts in Clausthal-Zellerfeld - the Marktkirche

As the main church of the mountain town of Clausthal-Zellerfeld in the district of Clausthal, the Marktkirche is designed as a 57-meter-long hall church, which is adjoined by three northern and two southern staircases. The entire static construction, all wall coverings and the roof truss are made entirely of locally available spruce wood, just the roof covering consists of folded lead plates. Based on existing records from the Thirty Years' War, it is known today that the entire construction of so-called moon phase wood has been taken. In forestry, there have been so-called lunar calendars for hundreds of years, which ia. provide information on when a tree is most effective to cut. Lumber harvested under lunar calendar conditions is said to have special qualities in terms of stability, durability, fire resistance, hardness and resistance to pests. Even though there are no scientifically documented proofs of these quality improvements, even in recent restoration work, 50 spruce trees felled under lunar calendar conditions have been used.

In the elongated nave, a flat, almost unadorned barrel vault forms the lower roof termination, only the surrounding galleries contrast with the ceiling cladding. In general, the entire interior of the church reflects the typical image of a Protestant church, not a colorful posturing, but limited to the essentials. Here in the Marktkirche, the organ, the pulpit and the baptismal font with their baroque carvings by Andreas Gröber immediately attract all the attention. The pulpit basket is symbolically borne by Moses, but the tablets of the law do not show, as one might suppose, the Ten Commandments, but verses 37-39 from the Gospel of Matthew:

When in 1634 a big fire destroyed large parts of the mining town of Clausthal, the predecessor church, which had just been completed in 1610, was so severely affected by the fire that restoration was not possible. Due to the Thirty Years' War, which almost completely brought trade and industry to a standstill, a reconstruction of the city and thus of the church was almost impossible. However, the first plans for new building began a short time later. Thanks to generous donations and a few foundations, the enlarged and more magnificent follow-up church was reopened at Pentecost in 1642. Now there were nearly 2,000 seats in the Holy Spirit Church. Following the following centuries, there were various extensions and conversions, but the overall impression of the church was not changed.

More than 7 years for the restoration of the Marktkirche

With the opening of the new building in 1642, the first organ also came to the Marktkirche, which origin from Andreas Weiß from Meinigen. Since 1976, there is a new organ, which comes from the organ builder Paul Ott from Göttingen. Today's organ instrument has 41 registers on the grinding shop, the playing tensions are mechanical and the register control is electrically operated.

For more than 7 years the restoration of the market church of Clausthal-Zellerfeld has been carried out. Already in 2008 the reconstruction of the church tower was completed. The entire outer facade is painted in a light shade of gray, here too nothing colorful or unusual except for the widely visible lantern pair of roof riders on the western roof termination and on the square belfry with its Welschen hood. The entire restoration work was jointly funded by public funds and private donations.

It is an amazing building that over the centuries has weathered all the bettors and events in history. One more reason to take a closer look at this masterpiece of wood construction technology.