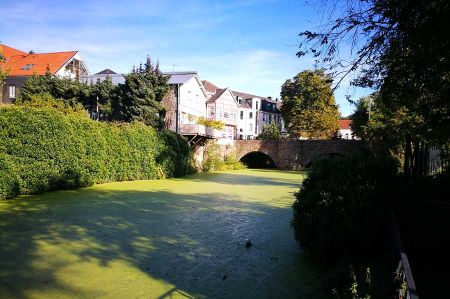 It was originally intended as the idea of a late summer walk that took us to Kettwig at Ruhr river on a lovely afternoon.

Kettwig is considered the largest district of Essen in terms of area, located in the extreme southwest, directly on the Ruhr and you hardly believe it, surrounded by dense greenery. No wonder that the place is surrounded by recreational areas, especially the Kettwig lake. The historically valuable old town forms the center, which we reached crossing an ancient stone bridge. Historically, Kettwig, along with Werden and Mülheim at Ruhr river belong to the northernmost parts of Bergisches Land.

The Kettwig Ruhr Bridge was first mentioned in documents in 1282. The river crossing was fiercely contested during the Thirty Years' War. The village or the peasantry Kettwig - north of the Ruhr - belonged to the imperial abbey Werden until 1803, was then administered Prussian until 1806 and then came to the Grand Duchy of Berg until 1813 as a "spots". Since 1815, the place was again Prussian, first in the district of Duisburg, then in the district of Essen (until August 1, 1929). Since 1857 Kettwig was an independent city. 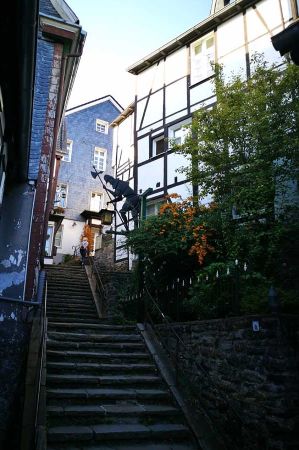 The old town with numerous half-timbered houses is preserved in large parts, although some were simply demolished between 1975 and 1977 in the context of the redesign of Schulstraße and Bürgermeister-Fiedler-Platz, still some intact timbered houses - including the restaurant "Zum Treppchen" could survive. The church steps and the surrounding houses form one of the outstanding surviving building ensembles of the historic old town. It was property of the church in the Middle Ages and was built around 1850 with steps and railings. The church staircase is one of the four old fire lanes between the Ruhr and the so-called Oberdorf and is first mentioned in 1368. The houses on the church steps are thus among the oldest medieval buildings in the city.

Right at the beginning of the church steps is the house number 2, a two-storey half-timbered house on a narrow rectangular floor plan, which points to the Ruhrstraße a pedestal made of rubble and a half-timbered building on Knaggen. It was the house of a cloth merchant in the 18th century and dominates the view of the church steps.
Right next to it, the house number 4, was already called  "Bacharachs house" in 1368. The family of Gyso of Bacharan at Rhine river built houses in Kettwig wine for the Werden Abt between 1345 and 1372.
The house number 5 opposite is the rest of an elongated house, which originally reached to today's Weber fountain.
The house number 6 stands on a two-storied stone foundation. This is even older than house number 4, because there were windows, which are walled up today. In the basement are remains of a blacksmith and an exposed well.
House number 7, on the middle paragraph of the church staircase, was already named "Hillenhaus in front of the churchyard" in 1368. In this house (Wevershaus) the first weaver of the place was living as resident before 1468. Today it houses the restaurant Stiege.
The house number 8 is a new building from the 19th century on the foundations of the "Keuthaus", a brewery from the year 1511. The location of the house is already described in 1368 as follows: "at the cemetery on the Trappen".

The figure of the night watchman between the houses 5 and 7 was made by Bernhard Nicolai in 1982 as a replacement for the original of the master smith Heinrich Winken from 1934 and set up. 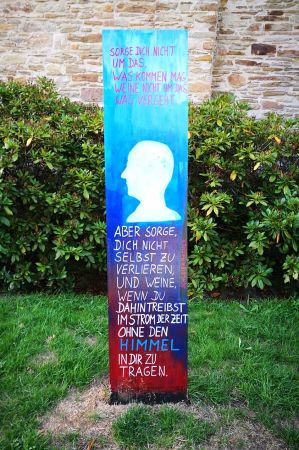 The church on the market in the middle of the old town became Protestant in 1592. The 40 meter high tower dates from the 13th century. The present nave of Ruhr sandstone in Basilica form was built in 1720/21, but larger than the original. This required a 4.2-meter higher roof. Adam Wunderlich thus replaced a multiple-burned predecessor building.

In 1830, the Catholic parish church of St. Peter was consecrated. It is a classical flat-roofed building of the architect Otto von Gloeden, Adolph von Vagedes with the participation of Karl Friedrich Schinkel. The baroque tower was added in 1886. The baroque high altar also comes from the revoked St. Catherine's Monastery in Gerresheim.

Other prominent landmarks include the Kettwig Town Hall, which was once a cloth factory and now houses the registry office and the Stadtmuseum Kettwig, the castle Hugenpoet with the originating chimneys from Horst Renaissance, the castle Oefte and the Kettwig lake and the mill trench from the year 1786, still existing from the penultimate Werdener abbot, Bernhard II, who built the stone bridge. This bridge, built of Ruhr sandstone, was probably the first construction phase for a bridge that completely spanned the Ruhr but was not completed.

In 1865 it was rebuilt after destruction in the Thirty Years War. The coat of arms of abbot Bernhard II is incorporated in the middle arch of the bridge. In the North of Kettwig you will find Maria in Maien - a small chapel, which is often used for weddings.

Upstream on the right side of the Ruhr, you will find the so-called Kattenturm. It is the ruins of the castle Luttelnau, which was probably demolished in the 14th century.
It is worthwhile not only following the tour through the old town, because in Kettwig there are the nature reserves Untere Kettwiger Ruhraue and Ziegeleigelände Asey, to mention only two great walking routes in addition to the possible excursions by boat on the Kettwig lake.
The sculpture park Kettwig was found in 1985 on the initiative of the artist Marianne Kühn and today comprises 14 works distributed over the area, done by Herbert Lungwitz, Carl Emanuel Wolff, Johannes Brus and Werner Graeff.

Locks of love at the Hohenzollern Bridge at Cologne
Jean Yves - Solar Trike and the Mini-Caravan - just a try?