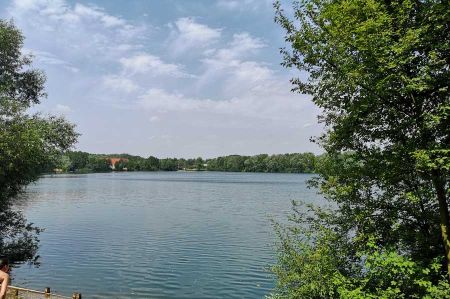 Once again on the way to visit relatives and friends, this time we were heading for Dülmen - Münster.

Summerly hot temperatures had already moved the thoughts and anticipation on a water with cooling air possibilities during the arrival. How good that our friends already had similar thoughts. So we were thinking to go to a nearby lake immediately after the coffee and home-baked cake.

As soon as you walk across the bridge, it becomes apparent that a large number of visitors appreciate the lake shore and the recreation possibilities. So many people cavorted around the water path. 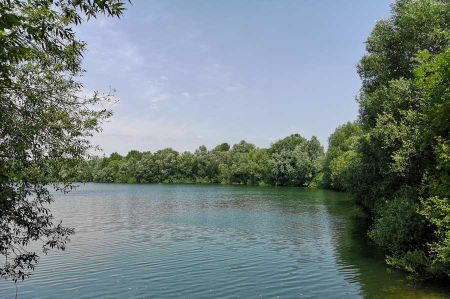 Very close to Dülmen there is a down to 11 meter of deepness, older quarry lake, where upon the meanwhile high tree stock on the shore refers too, which in the meantime has matured into a recreational area with the name Bulderner See. It is striking that this lake is divided into two distinct lake basins. One can subdivide the waters into a western and an eastern lake, which are connected by a canal with a bridge in the south. The special feature of this is the splitting of the usability: while one part of the lake is used for nature conservation, the other part is also intended for relaxation and calming down.

By the way: Bathing in the lake is strictly forbidden!

Loose trees on the shore - protection of waterfowl 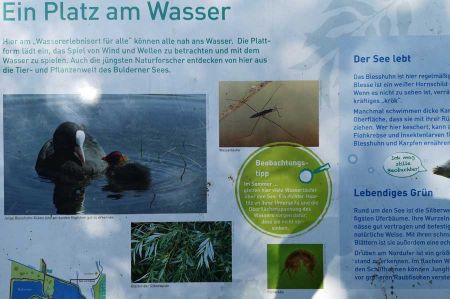 Due to the loose trees on the shore of the lake, structures such as deadwood can be found in the water. Certainly, however, a nutrient entry through leaves in the fall instead. On one hand this promotes the food for couple of animals but can also lead to a flattening of the connecting channel by digested sludge layers. In the east of the dividing promontory there are shallow water zones, which are often visited by the sea dwellers, ie fish, at sunrise. In the spring, the sun warms these places first and thus has an attractive and invigorating effect on the fish. At the beginning of the season you can also expect pike here. A paradise for fishermen and recreational anglers as well. 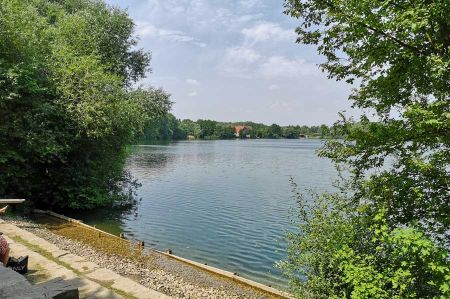 We walked along the waterfront promenade, occasionally glancing at the water to find a suitable place for the hours to come. A sandy shallow water zone had done to us then and so the picnic towels were spread, the later picnic prepared.

A quiet, but still moving Sunday at the lake, which could meet our expectations. Why looking into the distance, …..Of course, the lake should remain a recreational area for everyone, except for the bathing ban. Walkers and anglers (of course with a fishing license) etc. are welcome. A gastronomic location (lake barn) was also recently opened on the lake, which contributes to increasing the attractiveness of this excursion destination.