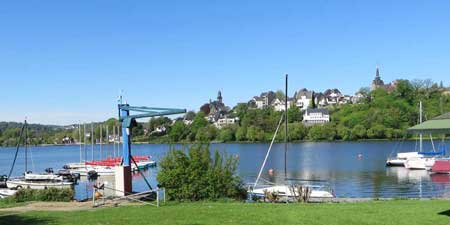 The river Volme forms the natural border between the Sauerland in the east and the Bergisches Land in the west. From the source of the Volme in Meinerzhagen to its confluence with the Ruhr below the Hengsteysee, the Volme covers a distance of just 50 kilometers.

A good part of this route, the Volme provides the course for the main hiking trail X20 of the Sauerland Mountain Association, which is why this long-distance hiking trail is also known as the Volme-Höhen-Weg.

Harkortsee and Wetter - a tour with eye-catchers Via Wolfgang-Reuter-Straße you can get into the historical core of Wetter an der Ruhr, which is also known as Freiheit Wetter. Along with Altena, Hamm and Hörde, Wetter was the fourth district town of the County of Mark. The Counts of Mark had their possessions on the Ruhr managed by the Wetter Castle, which was built in the 13th century. The castle ruins are freely accessible and offer a beautiful view of Harkortsee and the half-timbered houses of Freiheit Wetter. At the Reformed Church, built in 1894 from Ruhr sandstone, you go right along Harkortsee, which was dammed in 1931 and is now a popular excursion destination in the region with an area of 137 hectares. In the warm season the passenger ship Friedrich Harkort operates on the lake, but the Volme-Höhen-Weg takes the land route and passes the lake and with it the Ruhr across the Friedrichstrasse bridge.
After you have passed the railway and the A1 motorway, the Volme-Höhen-Weg takes the last stretch into the Hagen district of Haspe. Haspe was once the location of the Hasper Hütte, which employed more then 7,000 workers and established Hagen's reputation as one of the centers of the German steel industry. The Hasper Hütte was shut down in 1972 and today there is almost nothing left of what was once a large factory with four blast furnaces and three steelworks.

Volme-Höhen-Weg - part of the stage from Witten The starting point for the Volme-Höhen-Weg is the place Witten in the transition from the Ruhr area to the Bergisches Land. Witten is considered to be the historical nucleus of the coal pot. Hard coal was already being mined in Witten around the year 1000.
From Witten you first roughly follow the course of the Ruhr upstream to Wetter. Here is a nice overview of the rest of the hiking route from the Harkort Tower. You pass the Harkortsee (the Volme flows into the Ruhr above the lake) and cross the Ruhr in the process. Now you get to the Ennepe-Ruhr Valley, the northeastern part of the Bergisches Land. It passes over the Hagen district of Haspe and on via Voerde to Gut Ahlhausen in the Ennepetal. The Volme-Höhen-Weg leads hikers south of the Ennepe in an arc until they cross the river again east of the Westenberg (341m) and head for the Hanseatic town of Breckerfeld with the St. James Church, which is well worth seeing.
From Breckerfeld it goes on to the Glörtalsperre and then to Schalksmühle in the Volmetal. The Volme-Höhen-Weg now roughly follows the course of the Volme via Haus Rhade and Kierspe to Meinerzhagen to the Volme spring. The last part of the way on the Volme-Höhen-Weg leads to the Panneklöpper Land to Olpe on the Biggesee.

Hiking trail along the idyllic Feldaist River in Austria