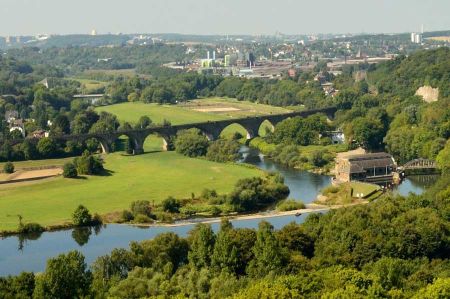 Another hike in the vicinity of the Hohenstein, not far from the Berger monument, brought us to the well-known Ruhr Viaduct and the hydroelectric power station that spans the Ruhr River as a railway bridge.

Both are considered well-known architectural monuments of technology and are also part of the route of industrial culture, it is not for nothing that the “viaduct is described as from a picture book”.

A proud 20 arches and 716 meters in length are convincing

The concrete arch bridge, clad with natural stone, spans the Ruhr valley with 20 arches over a length of 716 meters. The route runs over the viaduct in an arc with a minimum radius of 500 meters. With a width of 8.2 meters, the structure covers an area of ​​5,877 square meters. Construction of the viaduct began in 1913 at the same time as the construction of the railway line from Witten to Schwelm and was completed in 1916. The construction of the further route was delayed by the First World War and the subsequent occupation of the Ruhr. On October 4, 1926, the section Witten Hauptbahnhof - Wengern Ost was opened. At first the viaduct was only used for freight traffic; from 1934 passenger trains also crossed it on the finally completed railway line Witten – Schwelm, for which it was originally built. The height of the structure above the Ruhr was determined by this no longer existing route, as a significantly lower bridge would have been sufficient for a simple connection of the Witten main station to the Ruhr Valley Railway on the opposite bank of the Ruhr. The Ruhr Valley Railway was connected to Wengern via a line that was built later.

Resistance in the population against the building 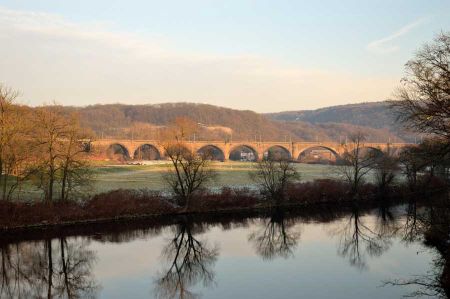 Already in the planning phase, the bridge met with broad resistance from the population, who rejected it as a disfigurement of the landscape. The protest could not prevent the bridge, but managed to have the structure clad with natural stone. The threatened demolition shortly before the end of the Second World War was prevented by the intervention of some railway workers. Today the viaduct is only used by freight trains between Witten and Hagen - the railway line to Schwelm has been closed since 1983, regular passenger traffic between Witten and Hagen-Vorhalle has been suspended since 1986. Occasionally, however, passenger trains also run over the viaduct when the railway line between Witten and Hagen (part of the main line of the former Bergisch-Märkische Eisenbahn-Gesellschaft) is closed due to construction work.

The Ruhr Viaduct ends on the north side of Witten with three steel arches, for which various purely speculative explanations are in circulation. According to more recent findings, the construction of the steel arches is said to have been carried out as a compensation business after a change in the original planning by the Dortmund steel construction company Aug. Klönne.

The hydropower plant below the Hohenstein

The Hohenstein hydropower plant is one of two run-of-river power plants in Witten an der Ruhr. The building owner of the power plant, which was built on a Ruhr Island between 1922 and 1925, was the Bredt shovel factory, located a little further down the river. The architecture of the power plant buildings in expressionist forms was designed by the Essen architect Edmund Körner. In 1928 VEW, now RWE, acquired the plant. The three original Francis turbines of the power plant had a total output of 1.75 megawatts. They were replaced by a modern generator in 1996 after damage.

Since 1986 the power station has also been listed as a monument in the list of architectural monuments of the city of Witten. It is also a location on the Industrial Heritage Route, but cannot be visited regularly. The power plant is located below the Hohenstein ridge from which it is named. However, it is also worth visiting from a distance, a term that we first have to learn its breadth in its new meaning.