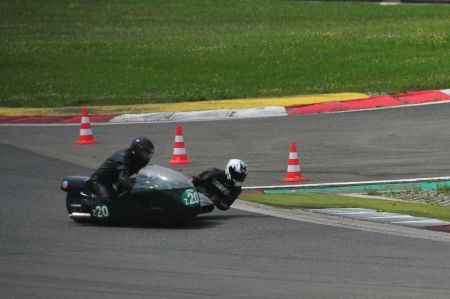 The legendary Nordschleife of the Nürburgring was classified as too unsafe for the Formula 1 in the 80s - probably the most negative example was the accident of Niki Lauda in the year 1976 - which is why the Formula 1 from 1977 onward just took place at the Hockenheimring.

Since people feared the migration of further international races away from the Eifel, the at the time 4.5 kilometers long Grand Prix track was built within the years 1981 to 1984. After more than 56 years of motor sport history on the Nordschleife, the time was right for a new chapter: On May 12, 1984, the new Grand Prix circuit was opened at the Nürburgring. In 2003, the Grand Prix circuit was extended by the additional section "Mercedes Arena" to the current distance of 5.148 kilometers.

The course today is between 10 and 25 meters wide and offers the driver next to seven left and ten right corners especially long run-off zones and gravel beds for safety. This makes the Grand Prix circuit today a contemporary and safe race course for motor sport events of the highest classes.

Cologne course - a run of the German Historical Motorcycle Championship 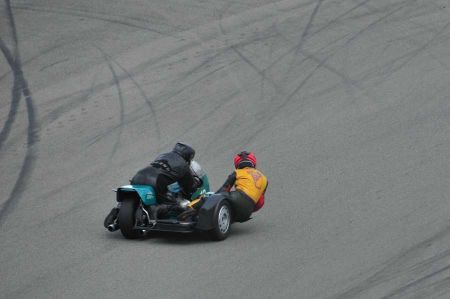 One of the newer chapters on the modern Formula One Grand Prix circuit is the so-called Kölner Kurs, various races of historic motorcycles and teams, organized since 1991 by the MSC Porz e.V. on the Grand Prix circuit of the Nürburgring. These races count as runs for the German Historical Motorcycle Championship of the veteran vehicle federation. An open paddock as well as race bikes of various eras contribute to the attractiveness of this event, where the starts of the team veterans as well as the start of historic scooters are among the highlights.

Completely different to the solo motorcycles are the teams with two people at the start, with the driver sitting on his knees and driving the bike is not solely responsible for victory or defeat. Here, the copilot is of great importance, which is crucial for the subsequent placement, because the weight transfer of the passenger in the sidecar, the load on the wheel of the side car can be increased or decreased. This driving technique serves to increase the possible cornering speed, often the most effective way to overtake. In curves to the side of the sidecar, the passenger hangs out of the sidecar in the direction of the curve inside, in curves in the other direction, the passenger "turns" in the direction of the driver onto the motorcycle. It is not without reason that the copilots are often called gymnasts.

Suspension asymmetry of the team motorcycles 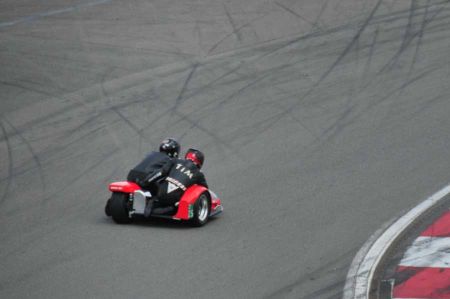 The reason for these activities of the copilot are in the chassis geometry of the teams, because the teams are asymmetrically steered vehicles, that is, their steering axis is arranged off-center. This means that they are completely different than solo motorcycles and or driving cars. A team is controlled in addition to the steering angle by weight shifting and accelerating or braking in and through the curve. The sidecar can lift off during steering movements in its direction from a certain centrifugal force, while it dips in front at the opposite steering angle, the rear wheel of the bike can take off.

For right-hander: The motorcycle must "walk around" the sidecar, that is, accelerating the steering assisted. The axle lines of the wheels differ greatly in a right turn, so that the sidecar wheel erodes stronger and high steering forces are necessary. Excessive cornering speed may cause the sidecar to lift off. By reducing the speed and increasing the radius of curvature, this can be corrected for driving dynamics. Experienced team drivers "complain" the sidecar wheel by additional load in the sidecar, as well as a larger gauge constructively counteracts the tipping moment. There is a risk that the driver overreacts during a "lift-up" of the sidecar, does not hold the handlebar firmly enough, and the sidecar "falls" due to the overrun reset. This can lead to a dangling traffic. The deliberate lifting of the sidecar is often demonstrated at events.
With left turns: The introduction of the curve by the steering angle is supported by gas loss. The axle lines differ less strongly than the right-hander. Through the toe run at a certain radius of curvature all wheels without erasing; the applied steering forces are lower. In the left-hander, there is the danger that the team does not "go away" at excessive speed and dry road at the back, but rather dips the boat's nose and raises the rear wheel. This immediately threatens the danger of a rollover forward over the boat.