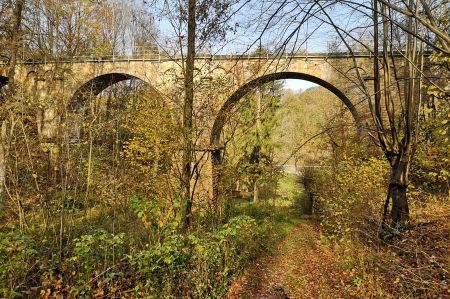 Autumn sunshine and the desire for exercise, once again the most important reasons to get on our bikes and explore the still new surroundings. Our motto, which is confirmed again and again: there is still so much to discover, you just have to do it.

And then again and again there will be surprises that are neither to be expected nor to be planned, including last weekend.
Via the wonderfully located sports facility near Billroda on the border between Thuringia and Saxony-Anhalt, it should go on branch lines to Bad Bibra, a small place known for its bathing and Kneipp culture. Without much preparation, ok, a few breads for Stopovers were prepared and some tea was taken by the thermos and off we went. Said sports field then led to some first photos, then continued by passing the village of Tauhardt in the direction of Wallroda, where we then turned off in the direction of Landstrasse 178. Here the encounter with the new railway bridge Saubachtalbrücke of the ICE line Erfurt - Leipzig, which a little later leads into the Finne tunnel. And it shouldn't be the last "bridge".
Almost parallel to Saubach and Landstrasse 176, a "green" hiking bike path leads into Bad Bibra. 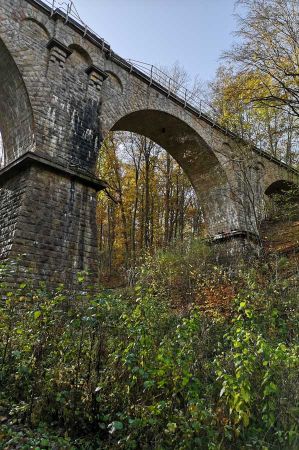 Our surprise was great when we came across a side valley that was spanned by a railway viaduct. Interest in this monstrous building was quickly aroused, initial research "organized" via the Internet and photos taken.

On March 11, 1908, it was decided to build a railway line from Laucha to Kölleda in the Ratskeller in Laucha, and project planning work began that same year. Construction began on May 8, 1912. The line between Kölleda and Lossa was opened on May 1, 1914, between Lossa and Billroda on July 1, and between Billroda and Laucha on October 1 of the same year.
Unfortunately closed today, the Laucha – Kölleda line, better known as the Finnebahn, was a single-track branch line in what is now Saxony-Anhalt and Thuringia. It branches off the Unstrutbahn in Laucha and meets the Straussfurt – Großheringen railway in Kölleda. The two listed viaducts in the Saubach Valley, the 29-meter-high and 100-meter-long Schneckal Bridge and the 20-meter-high 12 Apostel Bridge, which we now saw in front of us, deserve special mention. In 1944 five pairs of trains ran on weekdays and three on Sundays.

Dismantling as a reparation payment - the end of the Finnebahn? 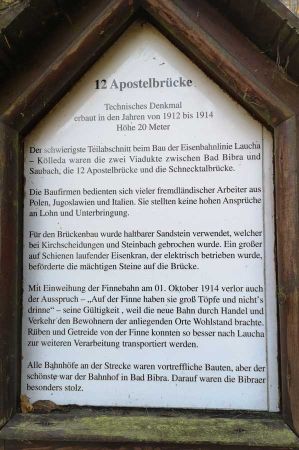 In November 1947, the line between Kölleda and Lossa was dismantled as a reparation payment to the Soviet Union. After the suspension of passenger traffic to Lossa on November 30, 1967, the route for Soviet army shipments was retained. Passenger traffic Bad Bibra – Lossa was discontinued on May 25, 1968 and Laucha – Bad Bibra on September 30, 1973. There was freight traffic to Lossa until December 31, 1993, to Bad Bibra until December 31, 1994. The remnant was the siding of the Laucha station for a long time and is dedicated to this day (2009) as a railway line and with the exception of the station facilities in Lossa still present.

However, the Finnebahn track in Laucha no longer has a functional connection to the Unstrutbahn.

Between Bad Bibra and Saubach, the aforementioned new construction of the Erfurt – Leipzig / Halle line crosses the Finnebahn. For this purpose, an overpass over the Finnebahn was built in 2002 directly next to the Saubachtal bridge, although the train service here has long since stopped and the track has been dismantled.

The Finne hiking trail now runs along part of the disused route. Good, but ... ...

The dismantling of the rail network continues incessantly 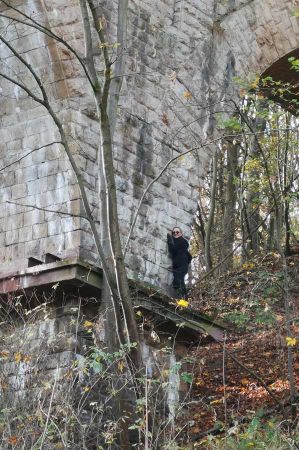 What proportion of heavy goods vehicle traffic could be moved away from the federal highways and country roads to the mostly still existing rails through a different transport policy will probably remain a political secret.

Just-in-time delivery requirements from industry, the relocation of storage capacities to trucks and thus to the streets, are the result of decades of incorrect economic and transport policies resulting from a political orientation that have led to chaos and death and a lot of standstill on the streets.

Has it actually been calculated honestly and objectively, we'd better not talk about sustainability, what the economy loses through daily traffic jams on the streets? Not to mention the countless permanent construction sites.