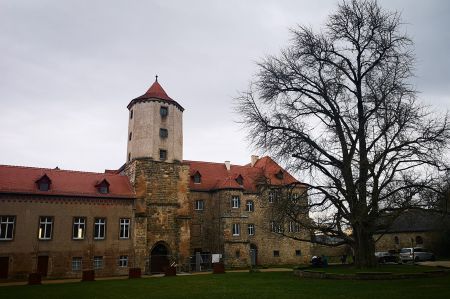 Goseck Castle is a medieval castle and later monastery complex in Goseck in Saxony-Anhalt, near the imposing and oldest solar observatory in Europe.

This is where we started our extensive exploration, so the sun observatory is the starting point for our hike over the ridge above Eulau, then down to the Saale and back up to Goseck Castle. From the sun observatory we first followed the marked path to the midwives' forest, then we went down a forest path to Eulau.

Right at the beginning of the valley we met a local forester who rightly complained about the forest farmers who had become active here, the ground was so furrowed and deeply churned up by their tractors that hikers had no chance of getting dry-shod down to Eulau. So, the complaint was justified, because despite all-wheel drive it was not possible for him to make any headway, so he had to grab the shovel himself. A short picnic at the village church in Eulau gave us strength again after this arduous section, so that we reached the Saale a little later.

Castle as a predecessor of Goseck Castle 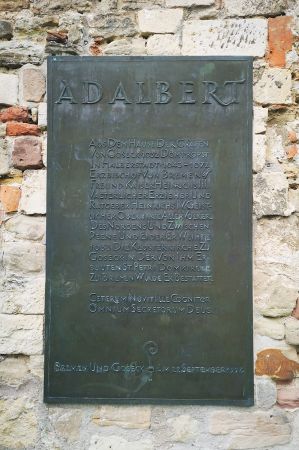 The new challenge that followed was the ascent to the castle or Goseck Castle, which was quite steep. The predecessor of the palace is a castle that was first mentioned in the Hersfeld tithe register between 881 and 899. In 1041, the sons of Count Palatine Friedrich I, the later Archbishop Adalbert of Hamburg-Bremen and the Counts Palatine Dedo and Friedrich II had the castle demolished and a Benedictine monastery built, which was consecrated in 1053 by Adalbert of Bremen. The castle was the ancestral seat of the Saxon Counts Palatine. The eastern parts (transept with crossing and choir) including the crypt of the monastery church consecrated in 1053 are still preserved today. Today's castle, built under Bernhard von Pölnitz from 1609, stands in place of the nave built in the 13th century. The church was renovated from 1997 and has been in restored condition since 2014.

Conversion to a monastery and manor 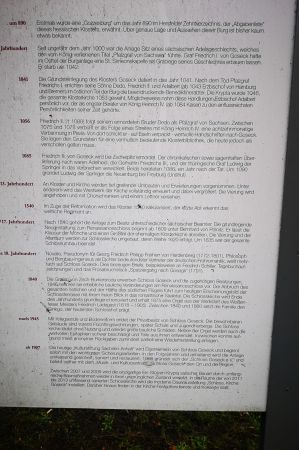 The monastery was secularized as a result of the Reformation in 1540 and converted into a manor. The main building was then called the castle. Georg von Altensee (also Altensehe) († 1565) and his brother Lamprecht von Altensee († 1581) are proven to be the first owners of the manor. The former had received the secularized monastery from Elector Moritz von Sachsen for good military service. In 1594 Franz von Königsmarck was enfeoffed with Goseck, whose wife Katharina married Chancellor Bernhard von Pölnitz after his death. Both were enfeoffed with Goseck in 1609. During this time, the monastery church was converted into a castle chapel.

In 1684 Amalie von Pöllnitz managed the estate as a widow under the guardianship of her sons Christoph Bernhard and Christian Julius Heinrich. Since both sons were declared dead after a sea voyage in 1698, the estate passed to various heirs, who left Goseck to the chief tax officer Gottfried Pfitzner († 1732). Other owners were his son Hofrat Jakob Heinrich Pfitzner († 1737) and his grandson Gottfried Heinrich Pfitzner († 1758). After his early death, his mother Charlotte Sophie née Lampe († 1776) took over the estate, which she passed on to her son from his second marriage, Ludwig Wilhelm von Eckhardt. 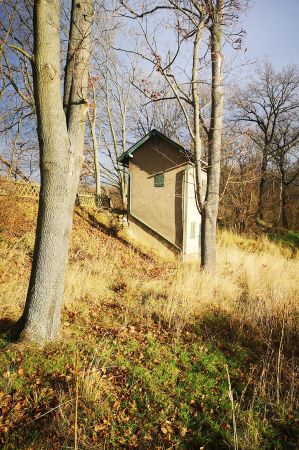 From 1808 Carolina Christiane von Schönberg, née von Brandenstein and her three siblings are proven to have owned Goseck. Goseck remained in the possession of the Barons of Brandenstein until 1840. Then Julius Graf von Zech-Burkersroda (1805-1872) acquired Goseck and Uichteritz and later Börln Castle.

So much for the castle and knight's castle, which unfortunately were not open for viewing the interior. The catering area was also still closed due to Corona. So, we were glad that we hadn't completely used up the picnic we had brought with us and found a wonderful spot with a bench and a view of the Saale on the other side of the castle wall. Except for the really badly damaged forest path, a hike away from traffic, meaning peace and pure fresh air.