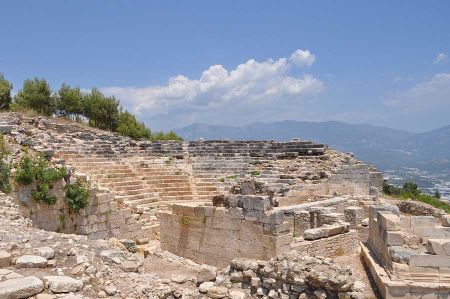 About 3 kilometres northwest of the city centre of Kumluca you will find the ancient city of Rhodiapolis on a hill that overlooks the entire valley to the sea and thus also Kumluca and Finike.

Probably built in the same period around the 4th century as the other Lycian cities of Olympos, Phaselis, Korydalla and Gagai, the ancient Rhodiapolis historically goes back to Greek settlers from the island of Rhodes. The identity of the names alone clearly indicates this. During the ongoing excavation work, however, hardly any traces of settlement from the time before the 4th century BC could be found, just a stone grave and some rock graves with inscriptions of Lycian symbols can be clearly assigned to this period.

From the reports of Alexander the Great it emerges that he made a longer stopover in Rhodiapolis for his troops before they moved on to their winter camp in Phaselis in 333 BC. Later, Rhodiapolis also belonged to the Lycian League and even had its own mint for the production of coins. The ruins excavated today are mostly of Roman origin, which were built here until the end of the 7th century AD. Until the fall of the city in late antiquity, Rhodiapolis was also a bishopric and belonged to the metropolitan of Myra.

We began our tour at the highest point where the ruins of an ancient lookout tower are located, which was probably built in Ptolemaic times around 300 BC. The theatre was built between the 1st century before and the first century after Christ and has been exceptionally well preserved. Like many other buildings, the theatre was badly damaged in the strong earthquake of 141 AD, but it was quickly repaired. Rhodiapolis owes this rapid reconstruction to one of its richest inhabitants, Opramoas, who lived during the reign of Emperor Antoinus Pius (138-161 AD). The mausoleum of 7.00 x 7.50 meters, which was once built to commemorate Opramoas, can unfortunately only be recognized as a ruin, but the remains consist of particularly carefully hewn stones and blocks. The patron Opramoas carried out similarly generous activities in other ancient cities. Correspondingly, there are inscriptions with thanks and dedications for Opramoas in other places. 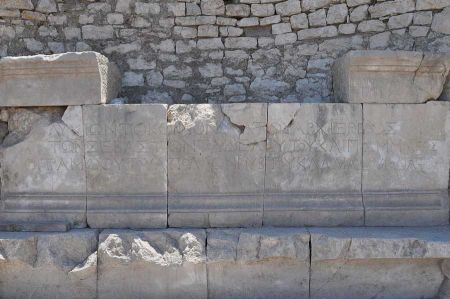 Opramoas is considered a prime example of so-called euergetism. Honourable residents of the city contributed to the welfare and / or maintenance of their city through foundations or donations. Especially in the eastern Mediterranean it was customary in antiquity to be able to polish up one's image further in the form of elaborate buildings in order to strengthen one's own position in one's city. Destroyed public buildings such as baths and theatres or supply facilities such as aqueducts were almost something of an invitation for the well-funded residents to prove to one another and thus underpin their claim to leadership. An example that some of our modern big capitalists should definitely follow.

Further down you get to the former boulevard of Rhodiapolis, which was lined with columns and can be considered the centre around the theatre, agora and stoa. The ruins of a Roman bath can also be seen here. Remains of an aqueduct indicate that the ancient city was once supplied with fresh water from the northwest, with part of the water also being temporarily stored in cisterns. The Rhodiapolis necropolis is to the east, northeast and north of the city. 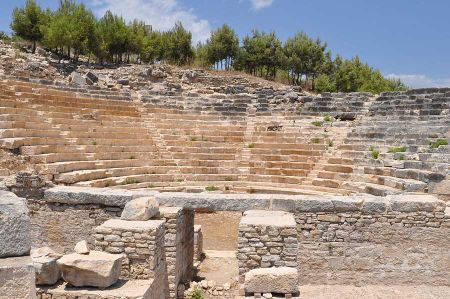 Why the city was abandoned in the 7th century despite the reconstruction has not been clarified to this day, despite the progress made in the excavations. Commissioned by the British Navy and the Archaeological Museum of London, the traveller T.A.B. Spratt, first reported on the ancient Rhodiapolis. The first excavations by archaeologists from Austria were already active on site about 100 years ago. But Rhodiapolis was quickly forgotten again and the rampant nature covered everything again. When there was a major forest fire in the nineties of the last century, the ruins of the ancient city were struck again by accident. The first systematic excavations were then carried out in 2006 and 2007 by Prof. Dr. Nevzat Çevik from Akdeniz University Antalya. Today more excavations take place every year, which are led by Dr. Isa Kizgut (Akdeniz University Antalya) stand. As we were told, after the excavation in 2011 in the ancient theatre of Rhodiapolis, the wedding of Dr. Isa Kizgut was celebrated here.