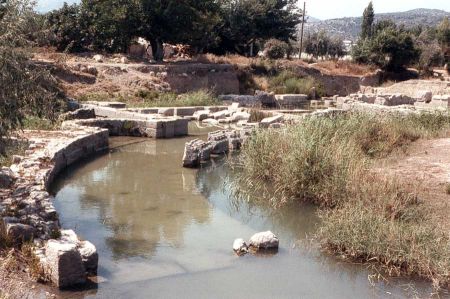 Coming from Xanthos, when we crossed highway 400, which connects Fethiye and Kas. It is just a few kilometers away from the road to the imposing fields of ruins with the holy grave of the goddess Leto, whose official religious burial place is said to be in Letoon, the oracle and “the” festival site of the Lycian Federation is placed.

First excavations years ago brought abundant finds, including ceramics from the 8th century BC. The fields of ruins also create the impression of a place of immense importance in the history of human settlement.

Here, at the source, according to Greek mythology, the place where Leto was worshiped, washed her children Artemis and Apollo in holy water in Lycia while fleeing from Hera. The history of the sanctuary is closely linked to that of Xanthos, who for a long time led the Lycian Covenant. All common cultic celebrations, theatrical performances and competitions of the Lycian cities took place here, in Letoon. A stoa that has been expanded several times and a small theater testify this. In the time of Hadrian the holy spring was set in a new, magnificent nymphaion (well building). The stadium has not yet been found. A monastery was built in early Christian times, but with the onslaught of the Arabs in the 7th century, the settlement of the place ended. Most of the French excavations have been taking place here since 1962 (photos by Axb CC BY-SA 3.0). 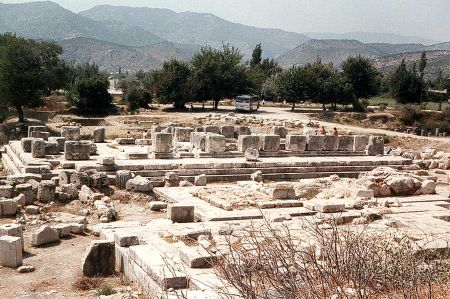 Letoon took the name and its meaning from the huge saints tomb for Leto, who, according to the legend, as told by the Latin poet Ovid, was loved by Zeus and was therefore the mother of Apollo and Artemis. Not very impressed, Zeus' wife Hera decreed that Leto should wander from country to country at all times. Based on local legend, Leto spent most of his time in Lycia, becoming the national Lycian deity. She had come to Letoon via Anatolia. Here she tried to quench her thirst at a spring, but local shepherds kept driving her away from the water - until she turned the shepherds into frogs.

The temple of the goddess Leto is the largest surviving temple, which was built around the 5th century BC. Due to its dimensions and the quality of its decorations, this temple is arguably the most impressive example of Greek architecture in Turkey and at the same time arguably the best preserved Greek temple in the world.

Ovid can add one more detail to the Leto saga in his Metamorphoses (VI, 340-380): “As a punishment, the goddess transformed those peasants who stood in her way on the way to the spring into frogs. So apparently nothing has changed in the swampy location of the Letoons since ancient times. The place of the spring is now under water again, the excavations are partly taking place below the water surface. Even the farmers are still around. Today, however, only their goats and dried vegetables block the way through the world heritage here and there ”.

Three temples between the swamps 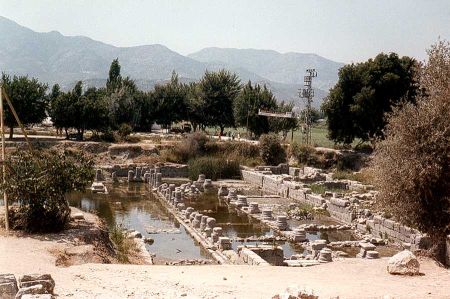 The foundations of three temples lie parallel on a small rock ridge between two swamps. The middle building from the 4th century BC is the smallest and at the same time the oldest and was dedicated to Artemis. In its former cella it includes a sacred boulder that was evidently venerated in archaic times. To the east the Temple of Apollo from the 2nd century BC which was built over a previous building about 200 years older. In the west around 160 BC. a Peripteral Temple dedicated to Leto was built as the largest complex. Unfortunately, all three structures are badly damaged.

The sacred spring was located in the swamp area immediately to the south. Foundations have shown that there was a place of worship here in archaic times. Today the remains of a magnificent nymphaion from the Roman Empire can be seen here. The semicircular paved basin with a diameter of 27 meters connects to a rectangular, recessed well house. In the early Christian period, the monastery was built precisely here, in the center of the cult site, which covers parts of the Roman building.
A third building complex is located in the swamp meadow north of the temple. The stoa was also laid out in archaic times and expanded several times until the 2nd century AD. The Hellenistic theater, which is only a little distant away and whose stage has no longer been preserved, is larger than a semicircle and divides the rows of seats into an upper and lower tier with a diazoma (intermediate aisle).
In 1973 an inscribed stele was found near the Temple of Apollon, which fascinated linguists and historians and is now in the Museum of Fethiye. In terms of content, it is a decree that ordered the introduction of a Carian gods cult in Xanthos. The decree was written in three languages, Aramaic (the lingua franca in the Achaemenid Empire), Lycian and Greek. Pixodaros, the satrap of Caria (and Lycia), appears as the author of the inscription.

Since there are other ancient places in Pydnai, Sidyma and Patara in addition to Xanthos and Letoon, you have the opportunity to visit various culturally and historically important places in a very small space, which, however, require some time and rest.