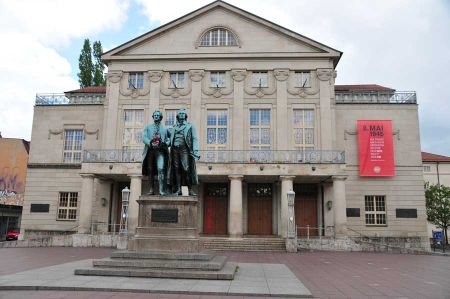 After our so much impressing tour through the former Buchenwald concentration camp close to the city entry of the independent city of Weimar, which had proved to be much more time-consuming than planned, we first needed to talk, so that we were able to exchange first impressions and ideas.

It was visibly and noticeably difficult for all of us to immediately return to the planned daily routine. It's good that the vastness of the area on the Ettersberg next to Buchenwald camp offered space and atmosphere for a longer walk, so that one could sort out the buzzing thoughts in the mind.

A little later we drove down to the city centre of Weimar by car, because the city mostly covers an arch of the Ilm river southeast of the 478-metre-high Ettersberg, from which we had just left. The Ettersberg is the highest mountain in the entire Thuringian basin, the city itself lies about 200 meters above sea level. Weimar is worth a trip for its cultural heritage, names like Wieland, Goethe, Herder and Schiller are inextricably linked to the city. But politics has also left its historical traces here, so here in Weimar after the lost World War I and the dissolution of the Empire, the first republic on German soil was declared, the Weimar Republic in 1919.

In the centre of Weimar - parking near Goetheplatz 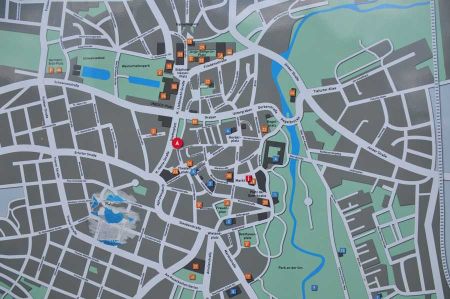 After parking the vehicle in Schützengasse, we had already arrived at the opening of the pedestrian zone at Goetheplatz after a few meters walk, where a more than man-sized sculpture of Goethe and Schiller welcomed us. A street sign directly opposite indicated to the homes of the writers, which of course belong to the main attractions of the city of Weimar in terms of booming tourism.

Before Goethe and Schiller became the legendary couple of friends of the Weimar Classic, who almost every day visited each other and not just exchanged literary, but also philosophically and scientifically, helped and motivated each other, they were real competitors. Goethe felt pressured by the younger man's growing fame. For him, Schiller was initially nothing more than an annoying reminder of his time in Werther and his own storm and urge, which has now been overcome. And Schiller saw person in the already established Goethe, who seemed unapproachable and arrogant to him at the first meeting (on September 7, 1788) that Charlotte von Lengefeld had put together, a "proud pride that one has to make a child to pretend humiliate the world ”. What connected the two rivals later was the mutual work on their own ideas, which is worth promoting and mutually enhancing in the intensive exchange of thoughts and feelings, was the declared purpose of this friendship, the history of which was no less than a decade "Practical test of the educational idea in the age of classical music". When Schiller died, an era came to an end for Goethe. The relationship had become so intimate that Goethe, when Schiller died - as he wrote in a letter to Carl Friedrich Zelter - thought he was losing half of his life, even losing himself.

Schiller and Goethe - eminent figures in the city 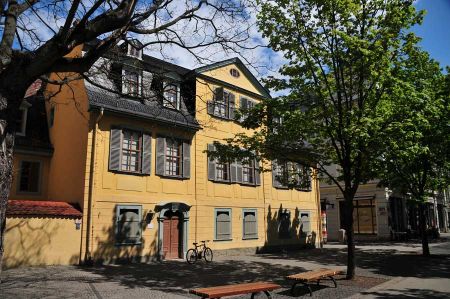 After Schiller had moved to Jena in spring of 1794 and had obtained Goethe's commitment to work on the monthly magazine "Die Horen" in the summer, the first friendly correspondence developed between the two. In September 1794, Schiller was invited to Weimar by Goethe and spent two weeks in his house. He kept up with his daily routine, which meant he slept until noon and worked at night. Knowing about Schiller's conservative morality, Goethe and his long-time partner Christiane Vulpius covered up their “wild marriage”. The hide and seek game must have caused an unusual logistical effort in the house of Goethe in the two weeks. Christiane and her five-year-old son August remained invisible in their own house. Schiller described the relationship with Mademoiselle Vulpius as Goethe's "only nakedness" and criticized him in a letter for his "wrong terms about domestic happiness". Goethe spoke of his "marriage without ceremony". Schiller's passion for playing cards and tobacco disturbed Goethe, who could sometimes be malicious towards friends; the often-rumored anecdote that Schiller was only able to compose with the smell of rotten apples also came from him.

The Bauhaus is also one of the highlights 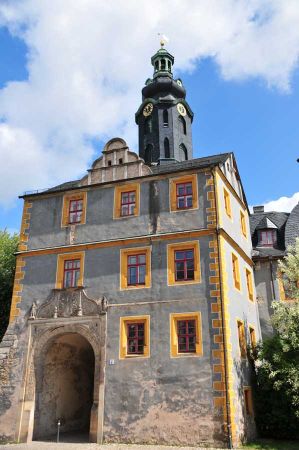 Directly opposite the Goethe / Schiller sculpture, we caught a first sight of the Bauhaus Museum. The term Bauhaus with its founder Walter Gropius, a term for every student of architecture and design, is firmly linked to Weimar, after all, in 1919 Walter Gropius founded the State Bauhaus as an art school in Weimar. In its conception and style, the influence of the Bauhaus became so significant that the term modern in architecture and design was often equated with the term "Bauhaus". In the designs and works of teachers and students at the Bauhaus, the orientations towards "Functionalism", "New Objectivity" and "Classic Modern", which are still taught in architecture today, are something completely new at the time. The response from the Bauhaus continues to this day and significantly shapes the image of German designs abroad.

The current main building of the Bauhaus-Universität Weimar was built in 1906 according to plans by Henry van de Velde, who became the direct forerunner of the Grand Ducal Saxon Art School Weimar just one year later with the Grand Ducal Saxon School of Applied Arts Weimar, which he founded himself. In the Bauhaus, the traditionally separate areas of fine arts, applied arts and performing arts were combined on the basis of the concept, which in turn had a strong impact on painting, performing arts and music.

“The ultimate goal of all creative work is construction! […] Architects, sculptors, painters, we all have to go back to the craft! [...] The artist is an increase in the craftsman. " 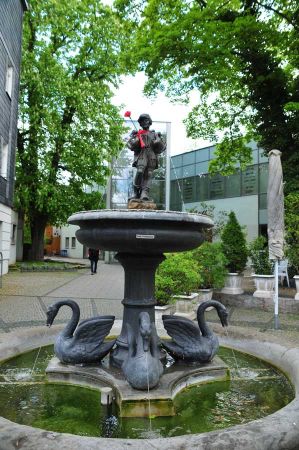 As a teacher, Gropius was able to attract major artists such as Lyonel Feininger, Johannes Itten, Josef Albers, Paul Klee (from 1921), Wassily Kandinsky (from 1922) and Oskar Schlemmer (from 1921) to the Bauhaus. In 1925 the company moved to Dessau. This is where the first furniture is made from the innovative steel tube material and - designed by Marcel Breuer (who owns the rights to the "cantilever chair"), Mart Stam and Ludwig Mies van der Rohe - the first cantilever chairs. Cooperation with industry started.

On December 4, 1926, the new Bauhaus building designed by Walter Gropius was inaugurated. The fully glazed workshop wing on the street side was particularly impressive, as were the “master houses” that were built at the same time and also designed by Gropius, which functioned as residential houses and, like the Bauhaus building, consistently and exemplary combined the developed ideas of living and working. 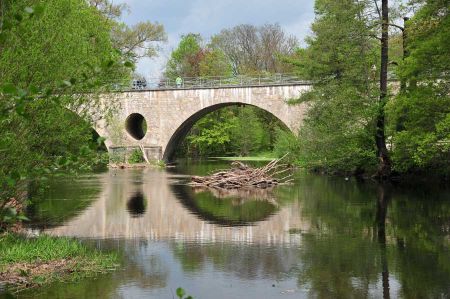 Our path then leads through a really beautiful pedestrian zone, which is shaded by large trees like an avenue. Almost all the places in the street bars are occupied, no wonder, here you can enjoy life. There is treasure and art to be discovered everywhere. We are fascinated by the development of the city, which until recently was also considered a "gray", inconspicuous mouse. House facades and squares appear picturesque, green and flowers everywhere, it is really a beautiful town, which is presented here on Saturday afternoon. A group of old-fashioned looking men and women cross the avenue, unfortunately we do not know what the purpose of the costume is.

We continue to the market square, where a large pottery market takes place today. Everywhere stands and suppliers of earthenware and sculptures, which are offered to visitors for sale. In the background the facades of the old town houses, so here too there is a colourful picture and hustle and bustle.

Weimar, we will be back, this time more relaxed and perseverance.