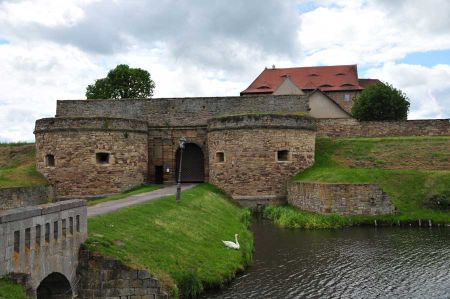 Several times we had already noticed street signs to the moated castle in the Thuringian town of Heldrungen, which we had not yet followed.

That should finally change, because our research had shown that the Heldrungen moated castle is the only completely preserved, fortified moated castle of French fortress architecture in Germany. The Heldrungen moated castle was used by the military as a fortress with two moats, four Vauban bastions and five roundels being built until 1712. The core of the fortress itself shows as a bastion castle from 1519, while the surrounding ramparts and bastions date from 1668. The main gate of the fortress is in turn flanked by two mighty round towers, which impressively guard the passage across the outer moat. It was clear from the start that the actual moated castle would probably be closed due to the pandemic, but we were still hoping for some magnificent pictures and interesting stories, especially after the decisive battle in the Peasants' War near Frankenhausen in 1525, the leader of the peasants, Thomas Müntzer, was trapped here was held.

Our first way led into the open, Lutheran free church located directly on the way to the fortress, where we heard some first facts about the moated castle and its history from the church servant present. So we also learned that there is a youth hostel in the castle complex today, which of course was closed too. We were also told that there was a partially developed path around the outer ring of water of the fortress, which we then followed with great interest. 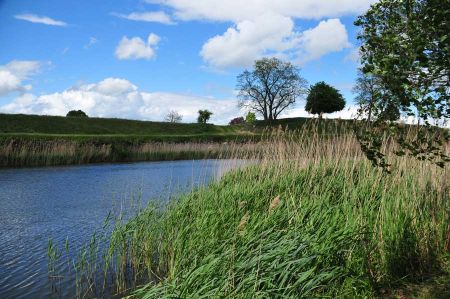 During the Peasants' War, the fortress played an important role as a retreat for the regional nobility. After the Battle of Frankenhausen, the peasant leader Thomas Müntzer was held captive and tortured in the castle in May 1525 until he was executed. As a priest, Müntzer was initially a committed supporter and admirer of Martin Luther. However, his resistance was directed not only against the clerical authorities ruled by the papacy, but also against the secular order, which was shaped by the estates. Because of Müntzer's radical social revolutionary endeavors and his spiritualistic theology, which were reflected in many militant texts and sermons, Luther distanced himself from him at the beginning of the peasant war.

In contrast to Luther, Müntzer stood for the violent liberation of the peasants and was active in Mühlhausen / Thuringia, where he was pastor in the Marienkirche, as an agitator and promoter of the uprisings. There he tried to implement his ideas of a just social order: privileges were revoked, monasteries dissolved, rooms created for the homeless, and a feeder set up. Ultimately, his efforts to unite various Thuringian free farmers as a peasant leader failed because of the strategy of the nobility. He was captured on May 15, 1525 after the Battle of Frankenhausen. The only way for the peasants to escape was the way into the city, where they were slain by mercenaries. Just a few insurgents managed to escape, including Hans Hut. On May 27, 1525, Müntzer was tortured, publicly beheaded and his body impaled. 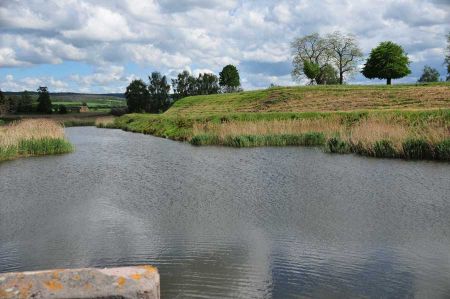 In the Schmalkaldic War there were battles for the fortress in 1546 and 1547. During the Thirty Years' War, the fortress was conquered on October 23, 1632 by Wallenstein's troops under General Merode. All fortress residents were murdered after the conquest. The fortress changed hands frequently during the Thirty Years' War until 1645, before being conquered by the Swedes in 1645. The fortress was badly damaged during the siege. The outer walls were razed in 1645. From 1664 to 1668, Johann Moritz Richter built a new, modern outer fortress based on the Vauban system. From 1680 the fortress lost its importance and the entire complex slowly fell into disrepair. The last garrison on the fortress was passed on December 17, 1712 by the Council of War of Tottleben. Through the Congress of Vienna in 1815 the place and fortress Heldrungen came to the Kingdom of Prussia. Due to the lack of military importance, the fortress was removed from the list of Prussian fortresses in 1860.

Creation and end of use of the moated castle in Hektiven 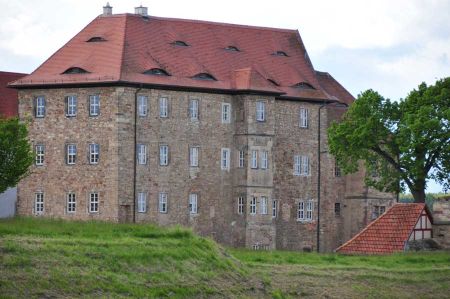 As the first fortification, a wooden refuge for the residents of the nearby manor "Roter Hof" was probably built at this point. The first documentary mention took place in 1126. At that time, the castle was owned by the Lords of Heldrungen. The first stone, Romanesque castle complex was built around 1190. The multi-storey castle from the Renaissance period goes back to a castle from the 13th century and its structure still shows some architectural parts from the Gothic period, such as the division of the windows. Around 1400 the castle came into the possession of the Counts of Hohnstein. Due to high debt, they had to sell the castle to Count Ernst II von Mansfeld-Hinterort (1479–1531) in 1479. From 1501 Count Ernst II von Mansfeld had the castle being renovated and expanded into a residence. From 1512 to 1518 the four-wing Renaissance palace complex was built for Count Ernst II and his second wife Dorothea von Solms.

In the years after 1519, fortifications with a total of 12 rondelles were built in two fortress belts and a double moat around the castle. The moated castle became a fortress, which in its time was considered impregnable. The complex of castle and independent fortress belt is characterized by the early Renaissance emerging in the Saxon region and represents an early example of the "bastionized castle". Comparable are Hartenfels Castle in Torgau, Wittenberg Castle in Wittenberg and Moritzburg in Halle. 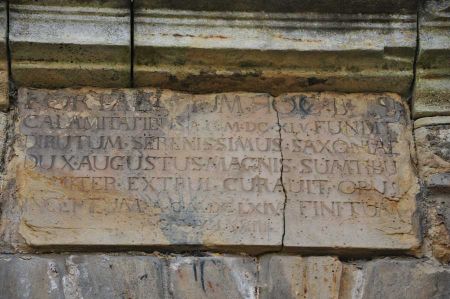 A Romanesque keep, which is also known as the “Müntzer Tower” because of the peasant guide who is held there, is integrated into the south wing of the castle. The building has been rebuilt several times over the years and dilapidated parts have been torn down, but today the castle is presented in an exemplary restored version.

The baroque fortress is essentially a structure made of earth with an economical use of masonry.

From the 18th century the fortress lost more and more of its importance.

Meeting with a local resident during the tour 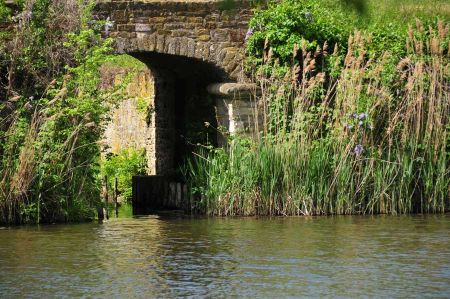 We had completed about half of the tour along the first outer fortification ring when there was another interesting encounter with an elderly lady who was able to tell us more details about the moated castle. So as well that after the end of the Second World War the buildings of the moated castle were used as apartments by around 30 families.

The first value preservation measures were carried out from 1930. Today the castle houses a youth hostel, which is unfortunately currently closed. The guests can embark on a journey back in time to the Middle Ages, for example with archery in the vaulted cellar, while boating on the moat around the castle or in the medieval cabinet with lots of interesting information about the life of knights and damsels.

Extensive renovation and restoration measures were carried out by the GDR from 1974 to preserve the building fabric. This work continued even after German reunification. Since 1976 there has been a Müntzer monument created by the artists Hans-Hermann Richter and Johann-Peter Hinz on the open space in front of the north wing, on which the prince servants frame the imprisoned Müntzer. A powerful young couple and three beaten farmers complete the property.

In particular, the inner and outer fastening rings with the bastions could be saved from decay. In 1990 the Burgcafé was opened, which has since been closed again.

Antakya Archaeological Museum
From Camping Rino in Kalista to Elbasan