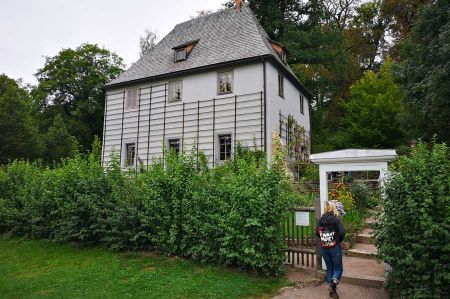 Weimar had once again inspired us to a visit: Weimar in summer: Moving, pulsating and extremely lively. The glory of the past flirts with fresh culture.

This must have happened to Johann Wolgang Goethe once, because when he came to Weimar in 1775, he showed great interest in the property for sale on the eastern Ilmhang. The house is possibly a winegrower's house from the 16th century - a time in which viticulture still played a major role in Weimar. In its time, the slope was more of an orchard or vegetable growing area. A depiction by Georg Melchior Kraus from 1777 shows this condition.

Meeting with Goethes Gardenhouse in Weimar 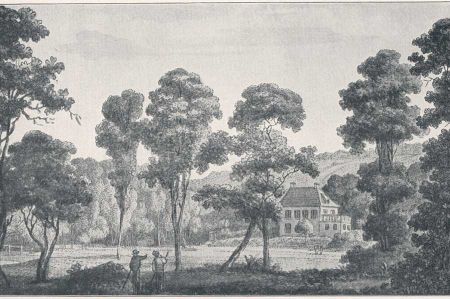 The garden was in a desolate state when Duke Carl August intended to give the property to his friend as a present. In April 1776, Johann Wolfgang Goethe acquired the garden on the Horne, including the garden house located in it, along with all of the earth, wall, tape, low and nail festivities in it. This is shown in the sales contract of April 22, 1776, which was confirmed four days later. The payment of the purchase price of 600 thalers in two installments of 300 thalers each was made by Friedrich Justin Bertuch from the Duke's box, who, however, considered it advisable to let Goethe appear as the buyer to the outside world. 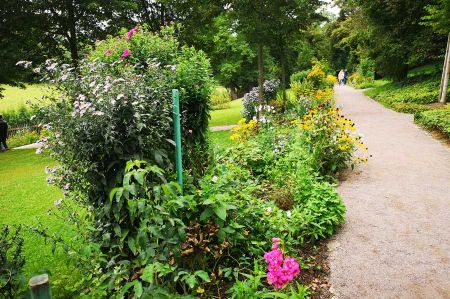 Goethe himself worked with great devotion on the renovation of the garden and had the house made habitable again. In 1777 he installed a wooden arbor on the south side of the house, which fell into disrepair during the Italian trip and was later removed. However, it is passed down through a drawing by Georg Melchior Kraus from 1777. Furthermore, Goethe had trellises attached to the house facades and planted. Roses (Rosa turbinata) grew in the north and west, vines in the south and honeysuckle in the east (probably Lonicera caprifolium). [1] The “stone of good luck” is located near the summer house. All in all, in contrast to today, the garden was also a kitchen garden. Here, Goethe laid the foundation stone for the redesign of the Ilmpark based on the Wörlitzer Park. 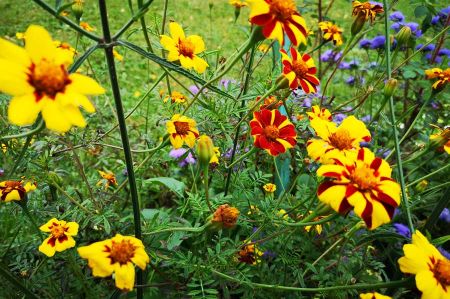 Since the small and modestly furnished house did not meet the demands placed on Goethe by office and social conditions, but could no longer accommodate his library and collections, he moved to the city in 1782, to the house on Frauenplan. But the summer house remained his favorite place to stay, which he used and visited again and again, for the last time on February 20, 1832.

In the garden house, Goethe worked on key works. Here he created parts of the prose version of "Iphigenie auf Tauris", here he worked on the dramas "Egmont" and "Torquato Tasso". Well-known poems such as “To the Moon”, “Restless Love” and “Hunter's Evening Song” were written here.

Today the garden house is set up as a museum. 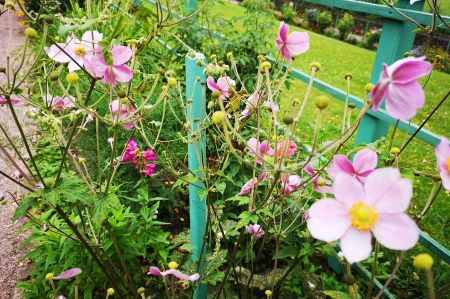 Ground floor: The entrance is still today via the stairwell, which houses the cash register and a small museum shop. From there you get to a larger room, which Goethe called his “Erdsälgen” (Erd-Sälgen) and used it as a dining room. The oak tables still standing there today and the two brown-painted mineral cabinets were already part of the first furniture by Goethe. The two large Rome maps on the opposite walls served Goethe since 1829 to remember his trip to Rome and to be able to orientate himself for his work on the second volume of his “Italian Journey”. Back over the stairwell and a small anteroom, the visitor has a glimpse of the kitchen from the door, of which the stove, the fireplace and the sink are still part of the original furnishings from Goethe's time. The other equipment (equipment and dishes) come from Goethe's time, but not from his possession. 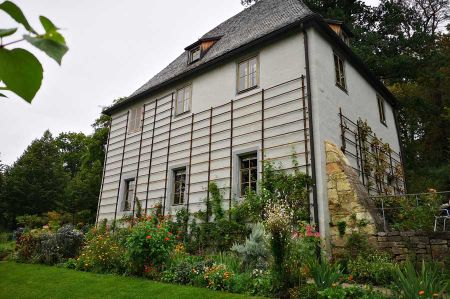 Upper floor: The stairs lead into an antechamber in which busts of Duchess Anna Amalia, Duke Carl August and a silhouette of his wife Luise can be seen. The atrium opposite the stairs was used as a salon and reception room. Here there are reliefs of portraits of Goethe's family members (parents, sister Cornelia) and Charlotte von Stein as well as a watercolor from 1779/80 by Goethe, which documents the back of the garden house with the attached arbor. The main room leads to the study, which is dominated by the high desk with seat and the fireplace. The study is adorned with various drawings by Goethe: Christiane Vulpius, sleeping on the sofa, dampening valleys near Ilmenau, Luisenkloster and Bergwerkskaue near Ilmenau. The bust on the mineral cabinet shows the philologist and writer Friedrich Heinrich Jacobi, with whom Goethe was friends during his time in Frankfurt. Next to the study is the library as a central room on this side of the building. The filing cabinet and the writing secretary in Viennese style still belong to the original furniture from the years 1776 to 1782. The second corner room was Goethe's bedroom, in which there is his travel cot and a herbarium press, which is also used as a desk. The easy-to-assemble travel bed was supposed to protect Goethe from vermin in guest beds.

The Park at the Ilm river - Weimar's green oasis

Castle and imperial palace in the small town of Allstedt