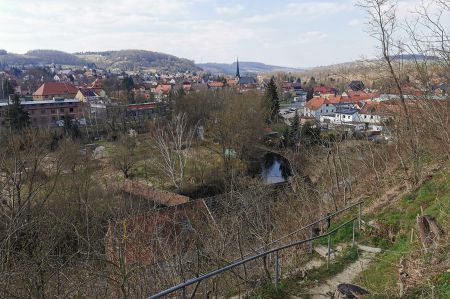 After an eventful day of hiking in Dornburg, we were on our way back and since it was still pleasantly sunny, we decided to drive to the town of Camburg, which forms a unit with Dornburg as a municipal association in the Saale-Holzland district.

After driving through a very deep ditch, which has been an important north-south connection since the 16th century and today forms the course of the country road, we came to a parking lot almost in the center of town. While driving down, we saw the mighty tower of Camburg Castle on the right side of the Saale on a north-south mountain spur. 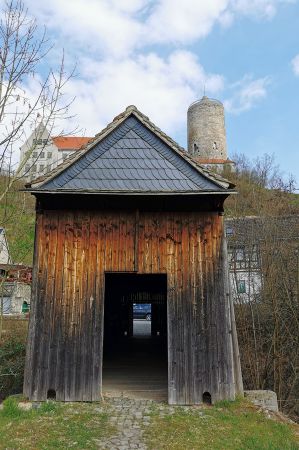 Camburg first appeared as a city, then called oppidum, in 1349/50. Such evidence is also available for the 15th century. In 1420 part of the site was mentioned as civitas and another part as sub castrum (probably the one just below the 'lower' castle). The oldest part of Camburg is on the eastern side of the Saale directly under the castle (sub castrum, sub urbium); The monastery of canons founded in the 12th century was also located here, which was moved to Eisenberg shortly after 1200.

In the second half of the 12th century, the Wettin dynasty gained a foothold on the Camburg. A castle chapel is first mentioned in 1213. In the 14th century the castle was a popular pawn; In 1439 it was sold to the Vitzthums. In the Saxon War (1446-1451) the castle was finally destroyed by Elector Frederick II the Meek (1412-1464). Just the 37-meter-high tower keep remained. On the area now known as Matzberg or Schlossberg there was most likely a two-part outer bailey. 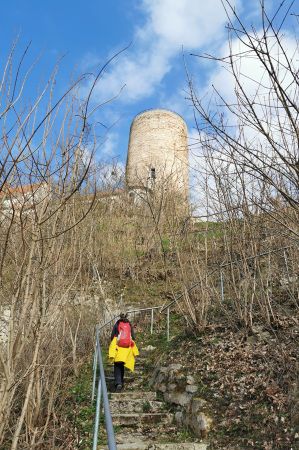 A bridge over the Saale in Camburg was first mentioned in 1494. A former wooden bridge downstream on the Schöpfe is certainly a legend, since there is no evidence of any traffic routes or buildings before the 18th century. Two inns in Camburg have survived from the 17th century.

In the late Middle Ages, the city was mainly on an important trade route from north-west to south-east, the salt road, which led from Stadtsulza (today Bad Sulza) via Schmiedehausen, Camburg, Frauenprießnitz, Rauschwitz, Klosterlausnitz to the Vogtland and on to Bohemia. Another important route came from Dornburg via Würchhausen, Wichmar, Rodameuschel and continued to Naumburg.

For a long time, the city and the associated care was managed by pledgees. In the course of the Saxon civil war, the castle, which had been sold to the Lords of Vitzthum, was besieged and razed

Pledge holders determine the development of the town of Camburg 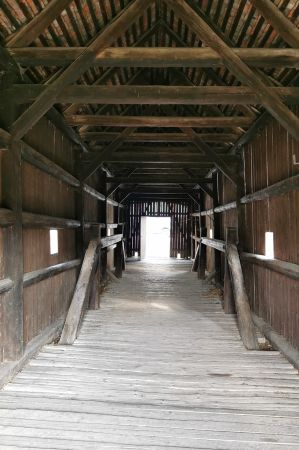 The city was also badly affected, so that even the legal status was affected. Camburg is mentioned as a village in the second half of the 15th century and in the first third of the 16th century. It was not until the middle of the 16th century that there was talk of a market town that was completely subordinate to the office in terms of jurisdiction. With the founding of the Duchy of Saxe-Altenburg in 1603, city rights must have been renewed, but this is not documented. Even if jurisdiction was still very limited, there was a mayor and a city council for the first time after 1603.

In 1740 the entire council archive was lost with the fire in the town hall (built in 1655), so that the prior data is uncertain. The successor building from 1741 stood on the east side of the market and in 1862 received a new entrance to the southern Neumarkt. Since the town hall no longer met the demands of the growing city, the new town hall with town hall garden was built in the immediate vicinity from 1888 to 1890.

At the beginning of 1935, accommodation for the Hitler Youth and the BDM was built on the lower castle. The inn that was previously located there was demolished and replaced by the building that still exists today.

In connection with the construction project, extensive excavation work took place under Gotthard Neumann. Some of the finds brought to light are in the Camburg City Museum.

The historic wooden bridge in Wünschendorf on White Elster