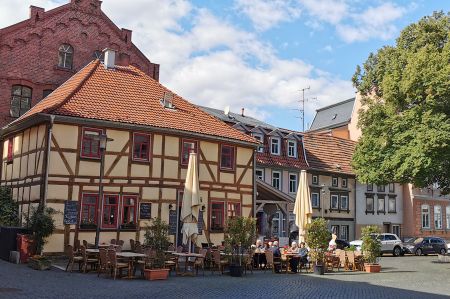 After our tour along the fortress wall of Mühlhausen, the city centre should now be explored. It is not without reason that Mühlhausen calls itself "Muhlhusia turrita", the tower-decorated Mühlhausen with once 59 towers, the churches and the city wall.

After all, 11 medieval churches and a well-preserved inner city wall ring with numerous defence towers enable us to experience the tower-decorated Mühlhausen of modern times. Not only sacred rooms awaited us, but also the unique profane use of the church building, for example as a city library, museum or theatre stage. The old town of Mühlhausen is considered the second largest area monument in Thuringia, which attentive visitors can already see from the red street signs. In addition to the large number of churches and museums, we wanted to take care of the lovingly renovated half-timbered houses and town houses, which there are in large numbers here. 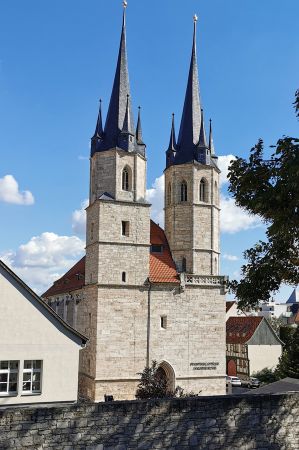 The "Zellsche Hof" is a town house with an eventful history and is located in Mühlhäuser Holzstrasse.

The "Zellsche Hof" was built in 1658-60 in place of the Stadthof of Eichsfeld Kloster Zella, which burned down in 1649.

It was a model for many town houses in Mühlhausen and, in the 18th century, a gymnastics and taxi post office.

With the secularization of the monastery, the building became private property in 1810.

The two rosettes carved in stone are reminiscent of the old brewing justice in Mühlhausen. In 1937, this historic building housed a car wash, repair shop and gas station.

House of the butchers' guild 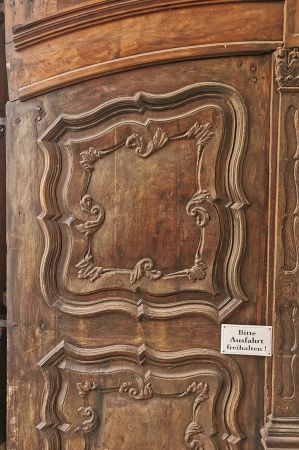 In 1577/78 the previous building of the Fleischhaus was erected with the broken stones of the Johanniskirche.

The ground floor housed the meat benches. On the upper floor there was a hall for the fairground stalls of the cloth merchants.

Theatre was also performed here. 1880-1882 the new "imperial post and telegraph office" is built on the site of the former butchers' guild hall.

1883 the new post office building on the Obermarkt is put into operation.

The building remained as a post office until modern times.

Deutschordenshof in the upper town 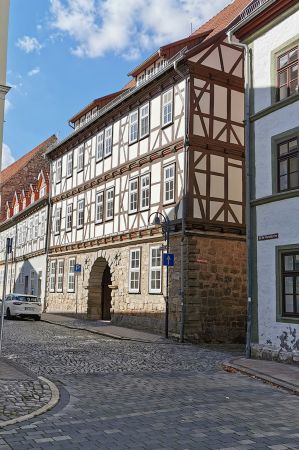 In the opposite Marienkirche, the reformer, well-known alongside Martin Luther, preached and placed the city at the centre of German history during the Peasants' War. After the departure of the Teutonic Order, the building became the rectory of St. Marien until 1975.

Friedrich August Stüler was born here on January 28, 1800. Stüler was one of the most important master builders of his time. In addition to the New Museum in Berlin, the "King's architect" Friedrich Wilhelm IV designed numerous Brandenburg churches and mansions, but the busy Mühlhäuser was also regularly active internationally.

Today the house houses the administrative headquarters of the church district of Mühlhausen. 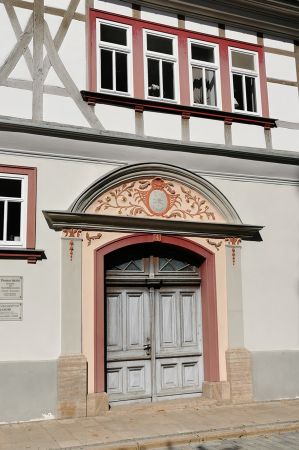 The building is a lovingly renovated half-timbered house in Mühlhausen's shopping street, the Steinweg.

It impresses with an atypical and decorative colour scheme. The half-timbered house was built after 1689.

On the 1st floor you will find a unique version of marbled woodwork with a continuous applied house lettering.

This is unique in the North Thuringia region.

A palmette stick between the severed beam heads and above it a continuous egg stick with relief is interesting for those who are familiar with half-timbering.

The framework was uncovered in 1993. 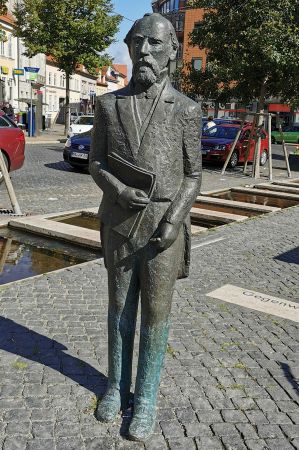 The "narrowest house" in Mühlhausen is at Steinweg 78.

The width is just 4.25 meters. 70 steps lead from the basement to the roof. The house has a half-timbered facade worth seeing.

The house was built in the 17th century and remodeled in 1906. Hat makers used it as a shop for many decades.

A comprehensive refurbishment took place in 2000.

Since 2006, "Die Goldschmiede" has been in the building - a manufactory that preserves and continues the old handicraft tradition of jewellery production. 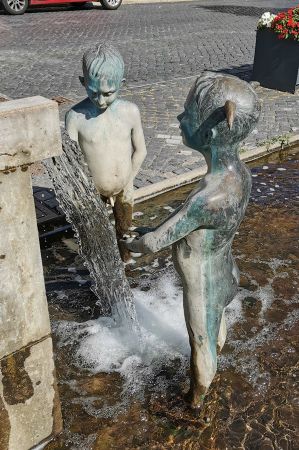 The "Mühlhäuser Hof" was built on the site of the former Dominican monastery in 1689 after the great city fire. In the 19th century there was a brewery with a bar and a restaurant in the building. The Mühlhäuser Hof has been a four-star hotel since 2006.

The building at Steinweg 65 is a farmer's house of a full citizen with brewing rights from 1689 (inscription). The courtyard at Steinweg 65/ Breitenstraße 1 was the location of a brewery until the First World War. The initial development after 1689 must have consisted of older building remains in addition to the main house; Adjacent to the inner courtyard are the ruins of the former preacher church of St. Peter and Paul.

The high and reinforced attic over three levels (with lying chair) indicates a tanning use. 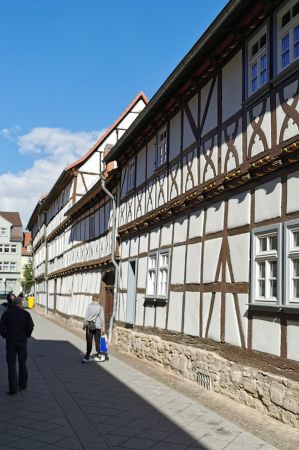 The building of the Brauhaus zum Löwen on the Kornmarkt has a façade that is well worth seeing and has a great deal of detail.

From 1780 it served as a pharmacy for almost 200 years and bore the name "Lion Pharmacy". A name that was the inspiration for the "Brauhaus zum Löwen".

The facade and elements inside indicate the former use as a pharmacy. Today's inn with its own brewery, hotel and a charming beer garden with a view of the Kornmarktkirche invites you to linger.

The previous building, the "lion pharmacy" was built in the second half of the 16th century. The pillar hall and the neighboring house were included in the new building from 1707-1713. A comprehensive renovation took place in 1992/1993. 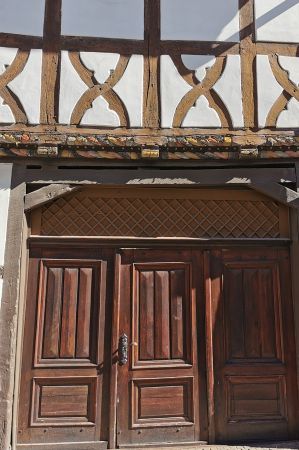 The half-timbered house worth seeing is located at Untermarkt 15 and has been a bakery for many centuries. The current building is from 1631, the plastered framework with the St. Andrew's crosses was uncovered in 1952. A long half-timbered house on the south side of the Untermarkt and on the east side of the adjoining Brunnenkreßstrasse is evidence of special architecture.

The gable end is almost six meters wide, while the building is almost twenty meters long. The "Bäckerhaus" has an inscription with the year of construction 1631, but as early as 1365 the citizens of Mühlhausen bought bread and baked goods here. The carved Envy head on the corner of the house is particularly worth mentioning. Half-timbered elements are projections with rope rods and chairs and struts mortised in the parapet areas of the upper floors. 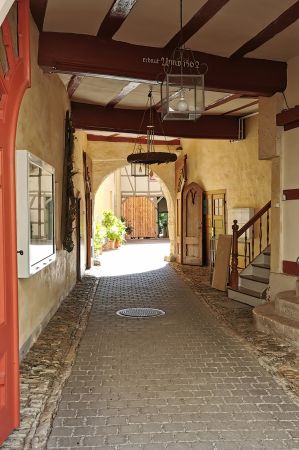 The Beurenhof is one of the many town houses worth seeing on Mühlhäuser Untermarkt. The building impresses with its loving renovation, attractive decoration and well-kept appearance. The town courtyard of the Eichsfeld monastery in Beuren, the "Bürenhof" was first mentioned in 1251.

The building in its current form was most likely rebuilt in 1550. After the monastery was dissolved, the Beurenhof returned to private ownership in 1810. Because of its large gateway, it was used for theatrical performances at the beginning of the 19th century, in which up to 120 visitors could take part. At the end of the 19th century, the building was used as a wine wholesaler, hosiery factory and seat of the development department of the tube factory. After extensive renovation from 2008, the building now houses a retirement home.