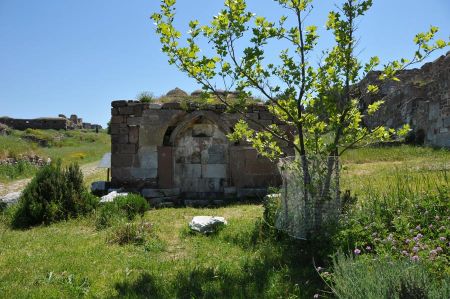 After a restful, quiet night in the small inn of Mitilini, after breakfast we head to the fortress ruins of Mitilini. The low-rise buildings of the town, which has around 30,000 inhabitants, stretch along the hill, which is towered above in an almost semi-circular shape by the massive ruins of the ancient fortress.

There is hardly a spot that does not allow a view of the castle, also called "Kastro of Mytilene" by the locals. The noble, neoclassical mansions in the districts of Kioski and Surada give an impression of the former wealth of the commercial port city, the cobbled bazaar street and the Prokymea promenade invite you to stroll and shop. But now it goes to the ancient fortress on the pine-covered hill of Mytilene.

But now it's off to the ancient fortress 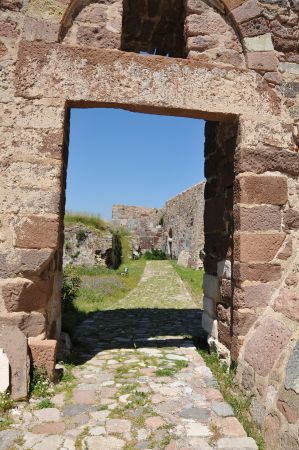 The history of the fortress dates back to ancient times, as evidenced by the finds made during the excavation work, many of which can now be seen in the local Archaeological Museum of Mitilini.

For example, a shrine dedicated to the goddess Demetra was found inside the defence system, which indicates a settlement long before Christ.

Examination of the building material of the fortress also indicates that a large part of the material had already been used in older buildings.

Some of the stone blocks of the fortifications certainly come from the ancient theatre of Mytilene. 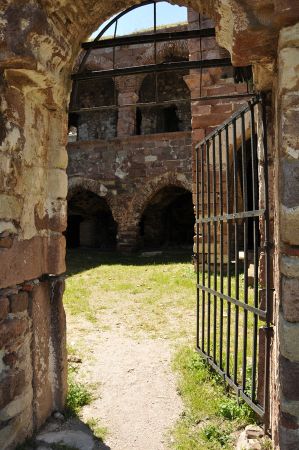 At the beginning of the Byzantine Empire, the fortress was built in its basic form under the reign of Emperor Justinian I during the years 483-565 AD.

During this period, numerous forts were built throughout the Byzantine Empire due to technological advances in weaponry.

Almost a thousand years later, the fortress was taken over by the Genovese Gattilusio family, who were able to build up a trading empire at the time.

During the years from 1355 to 1462 the Gattilusio's were able to renovate and expand the fortress. Even a catastrophic earthquake in 1384 did not stop the family from restoring and rebuilding the fortress.

The fortress built under the reign of Emperor Justinian I 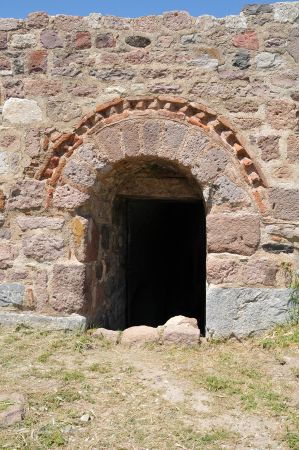 The square stone tower built by the Gattilusio family can still be seen today, well preserved.

On the wall of the tower there is a plaque showing the family coat of arms.

Other stones, which come from older buildings, show various representatives of Roman gladiator fights. At the outer gate is also a plaque with the coat of arms of the Palaeologus dynasty. Inside the fort you can also visit the underground catacombs where women and children sought shelter during times of war.

There is also a cistern for more than 4,000 m3 of water, which was used to supply fresh water. 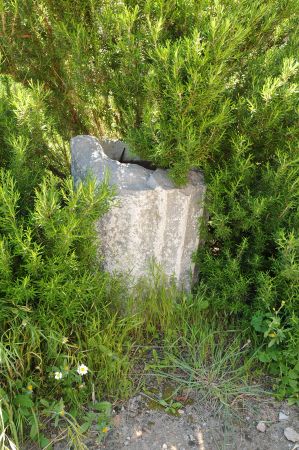 New ramparts, battlements and the erection of cannons were intended to protect the Christian inhabitants from the encroaching Islamic Ottomans, who were already able to establish themselves on the mainland.

Despite all these structural measures, the Ottomans were able to take the fortress in 1462 and thus gain control of the island of Lesbos.

The Ottomans were then also busy with the further expansion of the fortress and also built the second outer protective wall that reached to the northern harbour.

An Islamic school (madrasah) was also built in the fortress area.

Panel with the Coat of Arms of the Palaeologus Dynasty 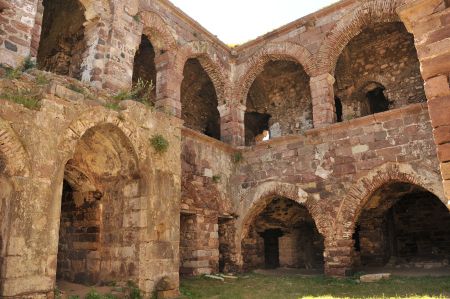 On our way we find a variety of interesting artefacts but also shady, secluded spots under pine trees that invite you to linger. Idyllic and with constantly changing impressions in front of your eyes.

In the summer months, against the imposing backdrop of the fortifications, there are a large number of concerts, theatre and opera performances, festivals and other events that are known far beyond the island's borders.

To the west of the city are the ruins of the Hellenistic theatre that once held 15,000 spectators. On the way there, it is a good idea to visit one or the other small church that is spread across the city.

Gain control of the island of Lesbos 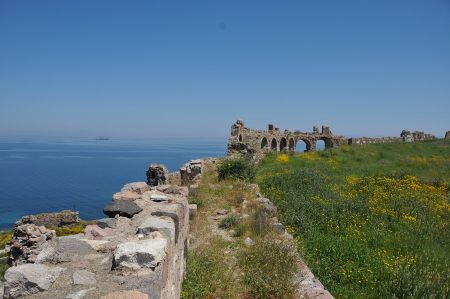 If you are thinking about swimming in addition to culture, you should leave Mitilini, because right on the outskirts of town is the Tzamakia lido, which leaves nothing to be desired. Should the Tzamakia lido be overcrowded, there are other opportunities for swimming, diving and many kinds of water sports along the road to the airport at the beaches "Vigla", "Neapolis" and "Kratigos".