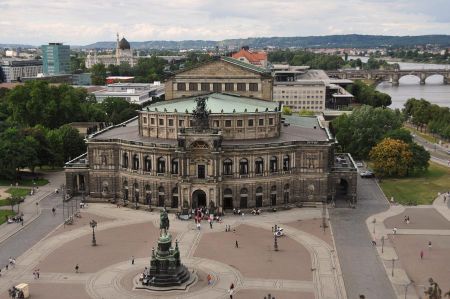 After our interesting visit to the Meissen Porcelain Manufactory, there was only about 50 kilometers to go to Dresden, which we covered on the federal highway 6, which ran parallel to the Elbe.

We then crossed the Marienbrücke over the Elbe to Große Meißner Straße in the direction of Neustadt, where we immediately found a parking space. A little later it turned out that the decision to walk towards the old town was exactly the right one. We used the Carola Bridge, over which the federal highway 170 leads in the direction of Rathenauplatz, to reach the old town. Crossing the Carola Bridge opens up a wonderful view of the entire old town, so that a wonderful panoramic picture of the old town of Dresden is possible. 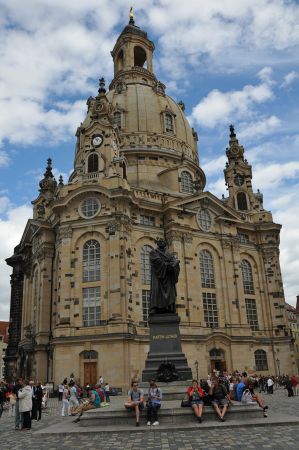 The history of Dresden's origins is probably based on the fact that there was a route at this point that was suitable for crossing the Elbe. The name Dresden is derived from the old Sorbian Drežďany, which means swamp or floodplain forest dwellers. Even if there is no longer any alluvial forest to be seen on the banks of the Elbe in Dresden today, you can still see the wide arc of the Elbe with shallow water and a sandy bank on at least one side, so that you can very well imagine a tour at this point. Archaeological traces indicate settlement as early as the Stone Age, although Dresden was first mentioned in documents in 1206. The circular moat in Dresden-Nickern alone dates from the 5th millennium BC. The early settlement of the Elbe meadows was very likely initially problematic, despite the very fertile soil. The problems caused by swamp and dense alluvial forest areas were probably too big. The nearby Meissen was already significantly more important from 986 and was considered the central place of trade and crafts.

Scholar on the development of porcelain 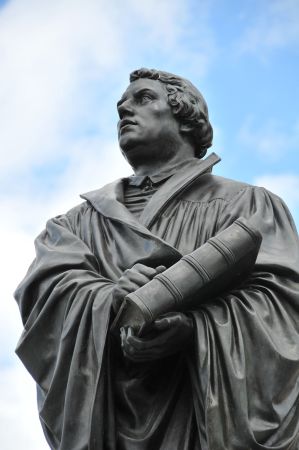 We leave the Carola Bridge and walk along the Brühlsche Terrasse in the direction of the Augustus Bridge, where a large number of excursion boats are already waiting for illustrious guests for Elbe cruises. Two old paddle steamers are also among them. The variety of steamer tours offered ranges from party steamers and culinary tours to singles meeting tours. The Brühlsche Terrasse is one of the remains of the old city fortifications of Dresden, about 10 meters above the level of the Elbe, which today have been expanded into a museum and allow a deep insight into the casemates of the once inaccessible fortifications of the late Middle Ages. Above the casemates is the Albertinum, the Dresden Academy of Fine Arts and the Sekundogenitur. At the eastern end is also the Jungfernbastei, which has gone down in history because of the imprisonment of various scholars on the development of porcelain by Friedrich August I. The path along the banks of the Elbe also makes it clear that Dresden is rightly called "Florence on the Elbe". The origin of this name was once based on the possession of the art collections in the city, but the scenic location on the Elbe and the baroque architecture of the city also contribute a large part to this name.

Frauenkirche as a war memorial 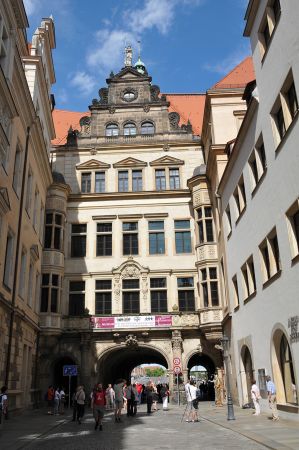 There is such a multitude of motifs that one can hardly detach oneself from the banks of the Elbe. Nevertheless, we first want to get to the most famous building in Dresden, which has been one of the city's landmarks at least since the reconstruction, the Frauenkirche. Since its destruction on February 13/14, 1945, it was the huge mountain of rubble with only two side walls that had survived that had shaped the cityscape. To commemorate this event, a large piece of debris has been preserved in front of the Frauenkirche, marked accordingly. A city guide later explains to us that despite the huge demand for building material after the destruction, nobody dared to go to the ruins of the Frauenkirche. It is thanks to this circumstance that the Frauenkirche could be rebuilt almost entirely from its own material. Today, the Frauenkirche is a war memorial and since its reopening in 2005 a "worldwide symbol of peace and reconciliation", supported by donations from people from all over the world during their visits. In the first two and a half years after the reopening alone, more than 5 million people came to view the restored church building.

Presentation of art and culture as a point of attraction 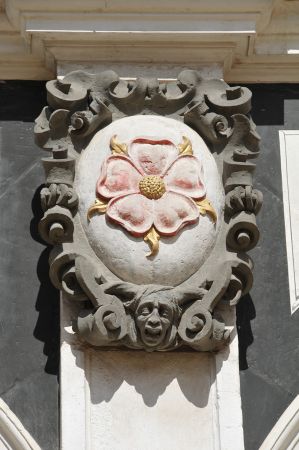 After a quick bite to eat in a restaurant whose interior design is dedicated to railway history, we continue our tour in the direction of the Semperoper and Zwinger.

The Semperoper was also destroyed during the war, but was rebuilt by Gottfried Semper between 1977 and 1985.

In addition to the Semperoper, the Zwinger is also a building in the baroque style, which was used for royal festivals in its day and is now considered an attraction for the presentation of art and culture.

The Zwinger was also built on one of the former bastions of the medieval city fortifications, which can still be seen today on the remains of the city wall on the south side.

The replica of the Kronentor was one of the first parts of the Zwinger to be rebuilt or restored after the Second World War.

Possibility to climb the castle tower 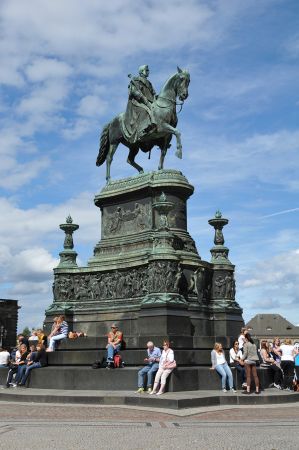 Our tour then leads to the Dresden Residenzschloss, the former residence of the Saxon electors and later kings.

Parts of the castle date from the 15th century, but the various wings have been constantly changed or enlarged in the years that followed.

A shambles of architectural styles. Only part of the Georgenbau is one of the few remaining Renaissance buildings in Dresden.

Reconstruction work on the palace began as early as 1986 and will probably be completed in the course of 2013.

The stable yard, which is already completely finished, is considered to be particularly successful in terms of reconstruction or restoration.

We use the opportunity to climb the castle tower, which, despite the many tiring steps, offers a wonderful panoramic view of the Zwinger, the Elbe and the terraced banks.

Implementation of the procession of princes in ceramic tiles 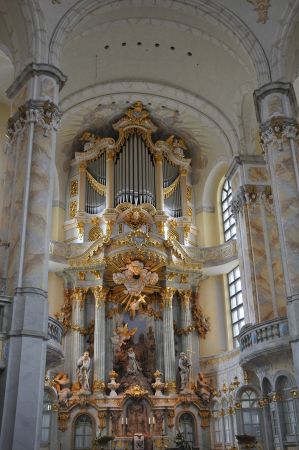 After leaving the castle tower, our path leads to the famous "Princes' Procession in Dresden", the larger-than-life picture of a cavalcade drawn on around 23,000 Meissen porcelain tiles and installed in Augustusstraße at the back of the stable courtyard between 1904 and 1907. The 35 margraves, dukes, electors and kings from the House of Wettin, who ruled in Saxony between 1127 and 1904, are shown over a length of 102 meters, making this ancestral image the largest porcelain image in the world.

The idea of ​​painting came up after the stable yard was built in 1589. First attempts to create representations as lime paint paintings were not very successful, since the weather quickly extinguished the colors. In 1865, the history painter Wilhelm Walther presented a draft for the redesign: The pageant of the Saxon Regents of the Wettins. However, Walther had thought of executing the mural in sgraffito technique, which soon turned out to be a mistake, because the weather also played its part here. So it finally came to the implementation of the procession of princes in ceramic tiles, which were fired twice at 1380 degrees. It is also thanks to this circumstance that the destruction after the Allied bombardment in February 1945 was not too serious.

Discussions about the construction of the Waldschlößchen Bridge 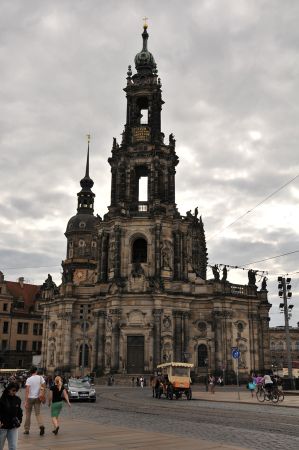 Friedrich Schiller wrote the poem "An die Freude" in 1785 for the table in the Masonic Lodge of Dresden. This poem, set to music by Ludwig van Beethoven in his 9th symphony, forms the melody of the anthem of the European Union.

In 2004, the city of Dresden received the status of a World Heritage Site from UNESCO due to the unique cultural landscape of the Elbe Valley, which stretches from Pillnitz Castle to Übigau Castle over a length of 12 kilometers and a width that varies between 200 meters and one kilometer World Heritage Dresden Elbe Valley.

However, heated discussions about the construction of the Waldschlößchen Bridge did not get the city of Dresden to give in, so that the World Heritage title was lost again with the construction in 2009.

In the historic old town of Dresden 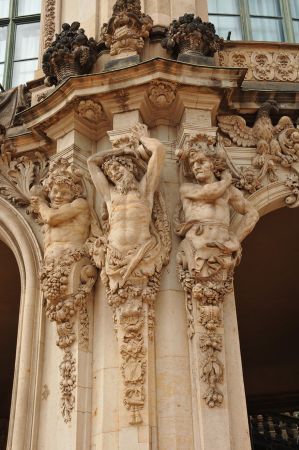 We could have continued our tour endlessly, the offers in the city were so diverse. But as has been said so often, this was a first short introductory visit that is guaranteed to be followed by more. We left the old town of Dresden over the Augustus Bridge, which was used by many "artists" on this day to present their skills. In addition to musicians and singers, there were all kinds of artists, some of whom were able to make it particularly interesting for bikers. They used stairs and walls for jumps and stunts. A great day in the historic old town of Dresden comes to an end.

We'll be back, that's for sure. At the very least, a steamer trip on the Elbe should be added to the plentiful unseen places.

Leipzig - on the way in the city of the Monday demonstrations

The zoo in Leipzig is a real magnet for visitors