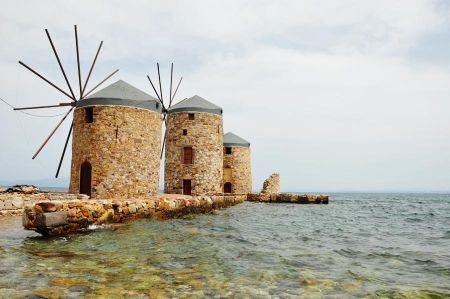 For some time now, visiting the Greek island of Chios has been high on my list of places to visit that just need a good reason. My friend Belgin now offered this reason, who suggested a short relaxation trip to the island of Chios at the weekend after a stressful work week.

I accepted her suggestion with great anticipation, even if it was only going to be a one-day visit. So we made an appointment for Easter Sunday and drove from Izmir via the highway to the port of Çeşme.

So the car stayed behind in Çeşme at the port 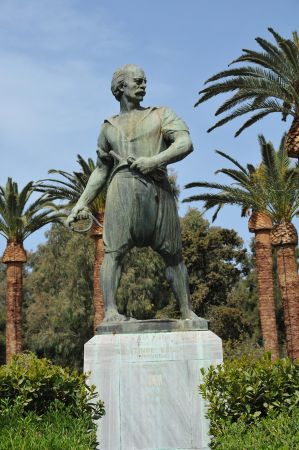 We arrived at the port of Çeşme in time for the departure of the ferry.

At first, we toyed with the idea of ​​taking the car with us to the island.

However, this was not possible as we did not have the vehicle's green insurance card with us.

It quickly became apparent that the length of stay for excursions by car into the interior of the island would not have been enough anyway, because we ultimately only had about 6 hours on the island.

So the car stayed at the port in Çeşme and we only paid the passenger fee. 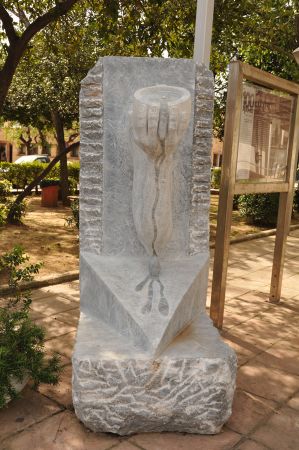 Despite the close proximity to the Turkish mainland, there are only between 7 and 13 kilometres between Çeşme and Chios, Chios belongs to Greece together with the Inousses archipelago and some other small uninhabited islands of the East Aegean. It is only 3 kilometres from Inousses to the Çeşme Peninsula. With an area of ​​around 842 square kilometres, Chios is the fifth largest island in Greece and the tenth largest island in the entire Mediterranean Sea. The island of Lesvos, which is probably better known in the field of tourism, is about 48 kilometres to the north, Ikaria is even about 58 kilometres away. With its approximately 25,000 inhabitants, the city of Chios is not only the main port of the island but also the port of call for ferries from the Anatolian mainland and from the neighbouring islands. However, there are a number of smaller harbours and bays that are also used as anchorages for tourist ships. Relatively sheltered by the proximity of the Anatolian mainland and the high mountains on the island of Chios itself, the east coast commends itself as a leisure boater's paradise. The north coast itself is quite steep, but the north-east coast also offers two sheltered harbours with the bay of Marmoro and the bay of Kolokythia near Langada. In the southeast follow the bays of Megas Limionas and Kalamoti and at the southern tip the coastline is more dissected by numerous harbour bays and capes. So it is definitely a recommendation to explore the island by boat through the bays and ports.

In the southeast follow the bays of Megas Limionas 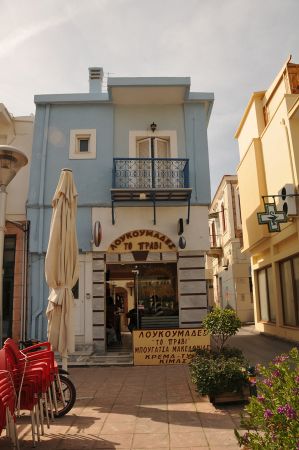 Even the view from the ferry showed a very mountainous island, which is dominated by two mountain massifs in the north: the Pelinneo with some peaks of more than 1,000 meters and the Profitis Ilias, which with its proud 1,297 meters is also the highest mountain of Chios is. The mountains of the Amani in the northwest of Chios “only” reach heights of about 800 meters. We were now quite happy to have come without a car at first, because we had no idea of ​​the quality of the roads on the journey into the interior of the island, which is only about 13 kilometres wide at its centre. In the longitudinal direction from Cape Masticho in the south to Cape Epanochoro in the north it is at least 51 kilometres, which, coming from the city of Chios, can be expected to have some serpentines on the mountains in both directions.

After mooring the ferry, the first route took us to the town of Chios, whose streets offered bustling life and a lot of local culture. We immediately noticed the very fruity smell in the narrow streets, which is so typical for Chios. "Citrus fruits are one of the most characteristic features of Chios, and hence the reason that the island is also called "myrovolos" (fragrant); since the moment you arrive to the island, the aroma of the oranges and tangerines' orchards will welcome you from the leafy green fields all around the island," says one of the island's mottos. 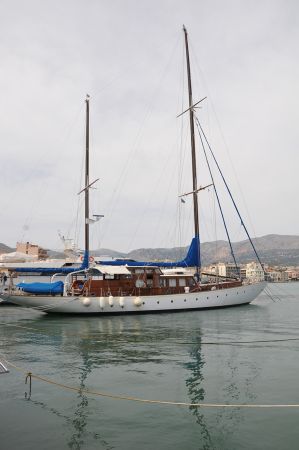 On the way we also came across what is probably the most photographed object on the entire island: the windmills. But it is also really too beautiful to see the ensemble of mills standing on the shore, even if without the white sails.

We were able to make extensive use of the stroll, and the small shops also magically cast a spell over us. After all, it is a small town geared towards tourism, which is just waking up from its winter slumber. Shopkeepers and passers-by were friendly and open, so that we could learn something about the history of the island. Inhabited for several millennia, we have already reported on one of the peculiarities of the island, the establishment of plantations of mastic trees, which have played and still play such a crucial role in the history of the island.

Citrus fruits are one of the most characteristic features of Chios 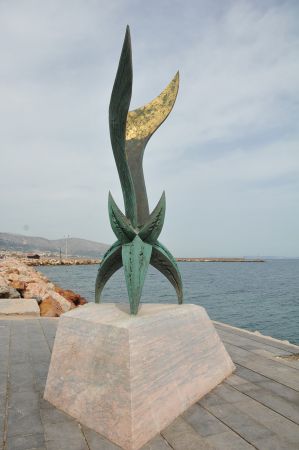 Findings in the caves of Agios Gala allow conclusions to be drawn about human settlement history up to around 3,000 BC.

The first king was Amphialos or Amphiklos, who was sent to Chios by an oracle.

A little later, Ionians from Asia Minor settled on the island, which subsequently rose to sea power around 700 BC and thus established itself as a centre of culture and trade.

Unfortunately, from today's point of view, the successful trade was based largely on the slave trade, which was still practiced until modern times.

According to the historian Theopompos, it was Greeks on Chios who opened the first slave market.

This led to a heyday of the island, which then also had the richest residents.

Center of culture and trade 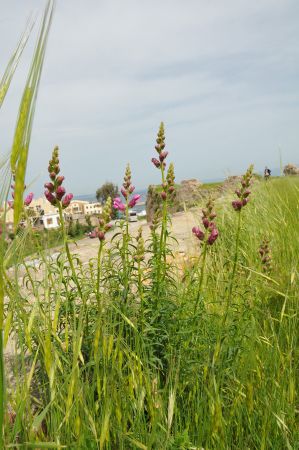 In the course of the Persian conquests, Chios was also conquered and occupied in 512 BC.

Due to the lost battles at Salamis and Plataea, however, the Persian governors of Chios were expelled again a little later.

During the time of the Attic Sea League, Chios experienced a second heyday, which only ended with the Peloponnesian War.

Chios now broke away from Athens and joined Sparta.

More and more the power structure shifted away from the island to the mainland, despite further alliances with the Athenians, Alexander the Great and the Romans.

The cultivation of mastic has always played a major role for economic reasons, even under the rule of the sultana Chios enjoyed special privileges because of the mastic.

Enjoyed Chios special privileges because of the mastic 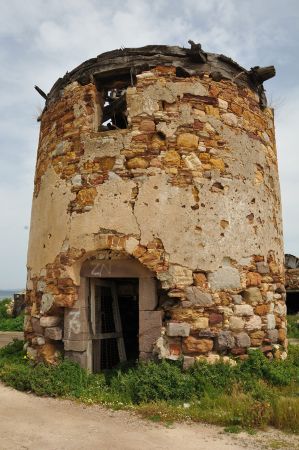 After so much historical information and a long stroll through the city, we got hungry, so we decided to visit a typical Greek tavern to enjoy a light lunch.

We quickly found a suitable place, asked about local specialties, which were brought to us a little later.

Delicious, that was the first impression after the Greek salad plate had been delivered.

This was followed by a delicious cheese casserole and grilled Mastelo cheese, which we particularly liked and is considered the specialty of the island.

And of course there was a hearty ouzo 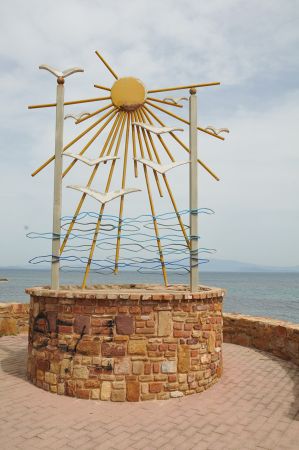 The host of the tavern pointed out another special feature that used to be an important reason for visiting the island: the (so-called) rocket war of Chios.

Due to an old custom based on the Ottoman ban on Easter, two communities shot each other with fireworks.

These activities were a 19th-century ritual event in which the two communities pretended to be at war.

This action was intended to scare the Ottoman occupiers and force them to give up the island so that Easter could be celebrated again in the future.

After all, more than 60,000 firework rockets were fired for this purpose. 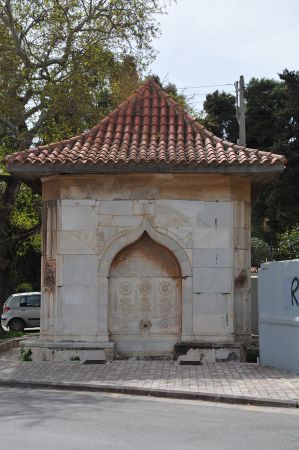 After our delicious meal, it was time to head back to the ferry. We were glad to have made the trip to the island of Chios despite only having a few hours to spare. We would love to come back again (this time by car) to explore inland as well. We will report in time.