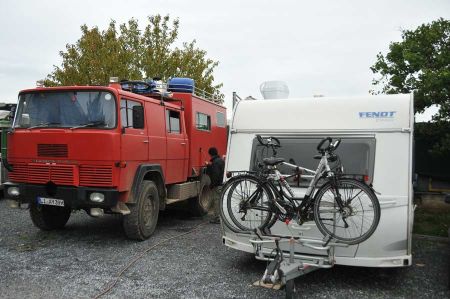 Once again, there was an interesting and surprising meeting, this time it was a bright red fire truck, which had been converted into a camper.

And again it happens at the premises of Zampetas in Thessaloniki, who like to give their open space at the company building to overnight campers supply them with electricity, internet and fresh water, a good solution since there is no other campground in Thessaloniki. We had already reported extensively about this possibility to stay. But now back to the fire truck.

It appeared with typical sound, a powerful Magirus-Deutz 110 D, four wheel drive with snorkel and air-cooled diesel engine, powerful impression flaying and parking next to us. Couple of people named Nadine and Tobi climbed out of the truck, and not to forget, Dr. Dog Zuko, their dog, back from their tour to the Meteora monasteries. And as usual, we quickly were in a conversation, especially since both of them knew very interesting travel experiences to report about. And not only that, but also their own story, it is worth to be mentioned here: "We have hung house and job on the nail, sold everything, what could be transferred into cash and bought this super fancy old fire truck to convert it into our mobile home, our plan was to visit German North Sea coast, then driving along the Baltic Sea through Poland, Lithuania, Estonia and Latvia, and then passing Russia, Turkey, Iran and Pakistan on the way to India.

Ok, so our inquiry, very interesting tour plan, but now it is October and you're on the road in Greece. Yes, the answer is: "to make plans is important to dare to get started for a trip, but if then you go and getting hit by your impressions, encounters and experiences on new paths, never be shy to change plans by the time... we did this some time ago and postponed our visit to the Baltic because of autumnal weather in Poland indefinitely. Also, our initial plan to drive to India has shifted through the already collected impressions to Morocco. So we come back to the first ideas and we'll see if it will remain for the next few months like that ... so it will be exciting! "

It was time to sit down together for a coffee, to get more detailed information and so it happened. First, we wanted to know something about the origin of the vehicle, where Nadine quickly intervened and spoke of two possible vehicles that once were available. When she however saw Tobis' bright eyes looking at the fire brigade, it was immediately clear what will be the result. It should be an all-terrain vehicle and also should comply with our own budget, especially as the conversion into camper needs to be done. We agreed on a price of 2.700, - € quite nice price since the fire vehicle still was in operation until 2008, which appeared to be appropriate because of the good condition. Intermediate term the vehicle was in private hands, but has only be used very little.

Now Tobi stepped in and explained the first steps of reconstruction and development, in which first the cabin´s ground was covered with vinyl flooring in wood look. The shelves made of steel frame for benches and bed are used as the framework of the sound boxes, very important! The sky was covered with wood. The body and the wheel arches were freed from rust, repaired with epoxy and repainted. A WLAN antenna, a compressor cooler and the kitchen was installed. Tobi´s design and ideas following according to the motto that the ideas for next step will arise during work. Often, however, also be rejected. So there were occasional adjustments and changes that emerged from sudden material sources, such as the window situation, were VW Bus windows were integrated.

To prevent long-term poor posture the roof of the camper had to be placed higher ... once flexed, we lifted it on steel struts. The blinds of the work cabinet were removed, additionally a cut for more comfortable living a passage into the cab was opened. At the steel skeleton steel sheets were welded and the walls are made of plywood. Of course, with cutouts for sliding windows. After the whole interior was insulated with Styrofoam, ceiling and walls were lined with wood panels. The floor was insulated with Styrodur and also designed with vinyl flooring. The walls to demarcate the bathroom were installed. The upper wooden cabinets done. A kitchen counter and a bench made of glued, all joints with colored epoxy apple wood panels installed. A gas hob and sink were embedded in the wood panel. The fresh water tank below the kitchen worktop installed. A cabinet for the bathroom sink finished, equipped with sink and created under a storage room with mounting for the gas bottle.

A lot of work and effort, what was already clear from the beginning. Very much work!
In parallel, the apartment has been resolved in the final phase of expansion, largely sold to achieve further property as possible as large revenue for the travel funds. Much planning and organization require the necessary visa, registration as a travel industry as well as health insurance. All this was eventually done and so it could then start mid-year.
Maybe we can keep this contact and we hear again of Nadine and Tobi, wherever they may be straight on the road.

Some information about the Magirus-Deutz vehicle

Magirus-Deutz is a retired truck, bus and fire engine manufacturer, whose origin lies in the Ulm Fire Department equipment factory Magirus. Therefore, the trademark of Magirus-Deutz showed the stylized silhouette of Ulm Minster in combination with a large M for Magirus. After major market successes in the 1950s and 1960s, Magirus-Deutz came in a crisis in the 1970s that led to the inclusion of the manufacturer in the Iveco Group. This presented the brand Magirus-Deutz in the 1980s. At times, Magirus-Deutz was the second largest German manufacturer of commercial vehicles, rose to prominence in the field of all-wheel drive Construction Vehicles and held the market leadership for fire-fighting vehicles in Germany and Europe. Today, vehicles of Magirus-Deutz - especially the characteristic round "Eckhauber" from the 1950s to 1960s - popular collectors' items.

Since the company Magirus fell to a factory for fire fighting technology, this division was also following the acquisition of Magirus by Humboldt-Deutz of great importance, especially the production of fire pumps, portable pumps and ladders, equipping trucks with fire fighting vehicle bodies and firefighting equipment and the construction of cabs in the form of group and squadron cabins with up to ten seats.

Exclusively for fire engines the Ulm-based company put the standard construction of fire fighting vehicle bodies on the Rundhauber models from 1951 a small series of the chassis S 6000 which was nicknamed "Coati" because of its characteristic shape. From S 6000, they had a six-cylinder engine with 125 hp, only 14 copies emerged. In 1950 Magirus-Deutz faced with an entirely new design of fire fighting vehicles that the name "Omnibus" was due to the rounded shape of the structures, because they recalled the shape of former coaches.

The Rundhauber were the most produced fire engines of the postwar period. That is why they remain so long after cessation of production in the streetscape presence and were almost symbolic of the fire fighting vehicle par excellence. 1951 Magirus-Deutz at the IAA presented the highest turntable ladder in the world that had a rise height of 52 + 2 meters, and the first rescue vehicle of the world with a fully rotatable crane. 1953 Magirus-Deutz brought the first fully hydraulic moving turntable ladder on the market. The chassis were generally of the type A 3500, Sirius and Mercur. For fire brigades there were (as opposed to the civilian models) also four-wheel vehicles with a round dome.

As from 1962, the round dome was gradually replaced by the Eckhaube even with the civilian vehicles, the fire department weir structures were henceforth preferably installed on Eckhaubern 2nd generation. Starting in 1956, they came up on the market with the 15 KW a heavy three-axle crane trucks with 15 tons of load on a Eckhauber chassis. This model was then unrivaled strongly in the market and was later upgraded to 20 tonnes capacity (KW 16, then 20 KW).

With the cubic D-Cab Magirus-Deutz was a pioneer in moving to COE the late 1960s,. As early as 1967, the entire fire department program of Ulmer manufacturer was available as standard as COE, while the competitors - in Germany mainly Daimler-Benz and MAN, the other truck manufacturers like Henschel and Büssing played no role in the fire area virtually - until the late 1970s clung to short "Hauber". (RW 1 to RW 3) Vehicles carrying tools and hose reel (SW 2000) with troop cabin: As D-Cabover the widespread LF 8 hard LF 16 and LF 16-TS were particularly available, respectively with group cabin and TLF 16 with crew cabin. As chassis mainly served the types 100 D 7-130 D 9 and 170 D 11-192 D 12; most of which were delivered with all-wheel drive.

Also in 1967 triggered shutters of aluminum extruded profiles were introduced after the previously folding doors used for the closure of the equipment rooms were always under construction and in the Frankfurt Motor Show the first fully remote-controlled turntable ladder in the world was introduced. LF 16 TS types were spread all over the Federal Republic of Germany in about 500 pieces, which are often still in use today. This also applies to the numerous built types with the cubic D-cabin trolley for the THW group with cabin and porch winch on the same chassis. Today decommissioned fire and THW vehicles with the D-cabin are (similar to the previous models with Eckhaube) frequently converted into residential, expedition and desert vehicles for which they are due to their air-cooled engine, to its robust technology and their existing generally four-wheel drive highly suitable.

On the way to Tierra del Fuego

Back at Lake Ohrid - morning impressions at the lake