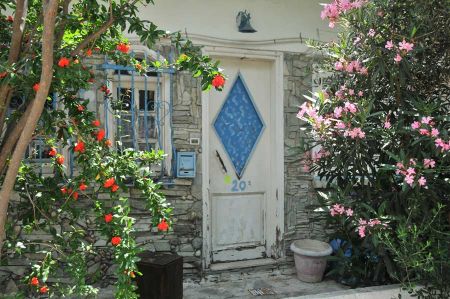 The most well-known landmark of the city of Thessalonica, as already repeatedly noted by us, indisputably is the White Tower, which dates back to the Venetian or the early Ottoman period and was probably built by Venetian architects.

Within the centuries the changing rulers used the White Tower as an arsenal, a prison for those sentenced to death, and under the German occupation during World War II as a food warehouse. In times of Greek sovereignty it was temporarily base of air defense, university weather station and until 1983 Naval Academy. Meanwhile, it is used as a museum and serves as a starting point for further exploration of the city for us that today is leading through the old town which at the end will lead to the Acropolis.

We arrived at the first remains of once really mighty ramparts of Thessalonica in the upper part of the old town a short time later. The walk along the city walls and now and then through the narrow streets of old upper town is a real experience, because again and again you come across small, absolutely surprising points of view, which makes the way, in spite of the continuous rise, so interesting (a small cafe tempts us to a short break with iced frappe. Greek café frappé, usually abbreviated frappé, a cold drink made by shaking or mixing foamed cream with dried Greek instant coffee with ice cubes. It is, like iced coffee, mostly used in summer and especially in the Mediterranean area, in Greece and Cyprus it is widespread).

A little later, we arrived at the almost highest point of the Acropolis and the Byzantine ramparts and we enter the Acropolis through one of two gates. Until 1989, part of the building with its citadel was used as a prison, but today, after extensive restoration, just as a prison-museum it is an interesting insight view to the past. From outside Trigonios Tower, a part of the city walls, you can enjoy a magnificent view over the rooftops of the city and the Thermaic Gulf.

For the first time, after only three-day siege, Saracens conquered and destroyed the city in 904. In 1185 Thessalonica was conquered and devastated by the Sicilian Normans. From 1204 Thessalonica, during the 4th Crusade, was capital of a shortly-existing Frankish Kingdom under the reign of Boniface I, Marquis of Montferrat when the Saint Demetrios and the Hagia Sofia were temporarily Catholic churches. From 1224-1242 the despots of Epirus in Thessalonica resided. 1227 Prince Theodore Komnenos Doukas (a cousin of the Emperor Alexios III.) crowned as an opponent king settled here. In the meantime, the city of the Bulgarian Tsar Ivan Assen II Empire established here. 1246 the city was again incorporated into the Byzantine Empire. 1308 Catalan tribes besieged Thessalonica unsuccessfully, 1342 to 1349 radical revolutionaries (the "zealots") created an autonomous city-state. In the meantime from 1387 to 1391 and from 1394 Turks dominated the town. From 1403 Thessaloniki was Byzantine and came to Venice in 1423.

While the Acropolis is not a place of ancient ruins of Roman buildings, as some other places in Thessalonica are, it's still an extraordinary embossed area which is framed by the old walls with living area as the highest part of Thessalonica, the place is like a well-tended park. The entire area that here forms a contrast to the modern housing development by dragging vegetated walls and remnants of walls.

On the way down, at every corner there is something to discover, many of the homes are old, small, ethnic, colorful and built in typical Macedonian style. The streets in the upper area are often very narrow, steep and winding, giving the Old City a particular village character. Everywhere one encounters smaller and larger churches like the Agios Nikolaos Orfanos dating back to 1310. Surrounded by a too proliferated gardens, with the statue of Prophet Elias, the Agia Ekaterini and Agii Apostoli can be visited and the approximately 150 meters above sea level the monastery Moni Vlatadon, which was founded in the 14th century and was fully restored in the past, is situated next to the ramparts.

Further on the way, we reached the most famous building of Old Town, the five-nave basilica Agios Dimitrios next to the Odos Agiou Dimitriou, which delimits the historic center of the lower city. Again surrounded by "prefabricated buildings", the monumental, bright red building of the 5th century uses an area of approximately 35 x 45. The Agios Dimitrios is the largest church in Greece. In its interior is an interesting crypt and some significant mosaics from the 7th to the 9th century, these are among the great treasures of early Christian art.

Among the early Christian and Byzantine buildings and the Church of Hosios David is one with a mosaic (5th or 6th century), depicting a beardless Christ. The church forms a precursor type of cross-domed church with mosaics and paintings from the 5th to the 14th century.

We slowly leave to the exit of our ferry back to Peraia with a walk through the shopping arcades. One more recommendation is to pay to the small boutique-like stores, the fashionable textiles at low prices, especially in the Ladadika district. The rest of the way back to the ferry we pass the countless street cafes of the waterfront, which act so inviting that you like to sit for another frappe.