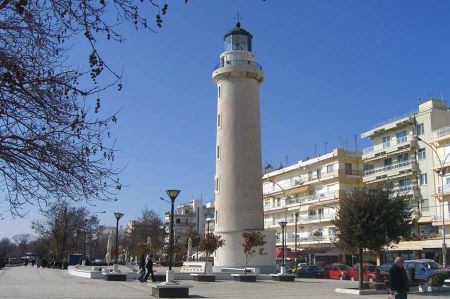 After our first somewhat adventurous night at the campsite in Kavala, we had gone back to modern Via Egnatia in the morning, direction towards Turkey.

Due to our plans, we had another stopover in Alexandroupoli to refuel before entering Turkey, since prices for petrol are cheaper at the moment and also to fill our fridge at one of the super markets again. Diesel fuel is about 30 cents / litre cheaper in Greece than in Turkey, not to mention the special offers of a very well-known food chain from Germany.

So we used the parking lot at the shopping center as well to park our long vehicle for a short stay at the port. Alexandroupoli despite or because of the economic crisis in Greece belongs to the few emerging cities. One of the landmarks of the city is the lofty lighthouse Fáros, superior on almost all buildings, right at the harbour. Considered from the coast of Germany, Lighthouses are not really an extraordinary phenomenon, here on the shores of the Mediterranean they sometimes are. Even if the once important functions have now long been replaced by GPS satellite navigation, the navigational light is still an important part of the orientation from the sea and it still is in emergency situations when the GPS fails.

Nevertheless the lighthouses originally origins from Mediterranean region. Centuries before Christ, there already was a stir sea trade in the eastern Mediterranean  between the ports of the ancient world, who used real fire as a signal for approaching ships to point in the right direction. Quite apart from the fishermen, which were guided by a small fire or something similar to torches from ashore on the way back to the coast. Especially in poor visibility and weather conditions the fire was a way to find home port used for centuries.

At least two of these ancient fires places are written down in documents and due to discoveries of stone work are regarded as secured: The Colossus of Rhodes and the Lighthouse of Alexandria. Both are expected to be built around the year 300 BC. The research, however, is not absolutely sure whether the Colossus of Rhodes was actually built as a beacon and served accordingly until it collapsed in 224 BC. From Pharos in Egypt, however, we know the function quite accurately, because this tower was  lost, just couple of hundred years ago, in 1303 by a violent earthquake.

In Western Europe, the "Tower of Hercules" in Galician A Coruña, Spain probably was one of the first lighthouses. The still used Roman tower was completed in the year 110 by Caius Sevius lupus and was originally 36 meters high and measured 18 m × 18 m at the base. The Tower of Hercules led sailors since the time of Emperor Trajan in the early 2nd century.

The corner stone of the foundation has the consecration inscription "MARTI AUG. SACR C. SEVIVS LUPUS ARCHTECTUS AEMINIENSIS LVSITANVS.EX.VO" to the god Mars, what the original tower the architect Gaius Sevius lupus from Aeminia (today Coimbra in Portugal) can have assigned. Oldest surviving mentioning of the lighthouse is from Paul Orosius in Historiae adversum Pagano (stories against the pagans), from the period around 415-417:

Under the Spanish King Charles IV. the tower was restored from 1788 - 1791 by Eustaquio Giannini (1750 - 1814). Here, the tower received a classical coating. The dimensions of the foot is 20 m × 19.5 m. He is thus the world's oldest still in operation "working" lighthouse, today 68 m high and at an altitude of 112 meters above sea level. For views of the Atlantic 242 steps must be climbed. Since the end of June 2009, the Tower of Hercules is UNESCO World Heritage.

Even the lighthouse Hook Head in Ireland is considered one of the first lighthouses of the Middle Ages. It was built in 1172 allegedly on the cliffs of the southern Irish town in County Wexford to Waterford. Still the tower bears fire in a height of 35 m.

In the 13th century the cities of the Hanseatic Federation (Lubeck and Wismar) began to install Candle lanterns in tall buildings in order to show the sailors the way back to Travemünde or rather on offshore islands . The existing port mark in Travemünde was even privileged imperially in 1226. 1299 the city of Hamburg received the North Sea island Neuwerk to build a „Feuerblüse“ (it is the early form of a lighthouse); this was completed in 1310 and still stands today. At 1625 a constant beacon on Wangerooge followed, the so-called West Tower, which today is at the eastern end of the island.

In many places along the coast people tried to renounce the construction of lighthouses. Instead, they took advantage of the steeples, which had not been successful in the long run.

Alexandroupoli is proud of its landmark and its functionality, because despite GPS Satellite navigation, the lighthouse remains solely because of his height as an important guide for fishermen and vessel trades. We even did not need GPS as we left the parking lot, because the way to the Turkish border was already known and well signposted too. After only 44 kilometres we arrived at the border crossing.

Routes to the South - also for long term stay (wintering)