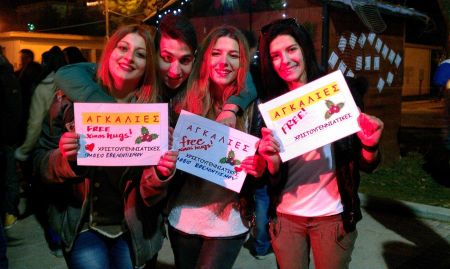 After our stopover in Vienna for further preparation of our project "A journey of Intimacy and Culture along Roman Roads" we had travelled along the former Autoput passing Croatia to Morovic (shortly before Belgrade), where we had stayed in a lovely private room rented out via the internet.

Very courteous innkeepers had asked us, if it will be possible to send an SMS one hour before the arrival, so the room and bathroom were already preheated. Due to that it was quite warm on our arrival, even the shower water was preheated. Perfect service in Serbia.

Early in the next morning we passed Belgrade and Nis and went towards Skopje. We preferred  to continue, despite of  the slightly longer route with a short section of highway through the mountains, towards Thessalonica in Greece to do some shopping before going on to Turkey. For the night we had booked a room online again, so that we were able to obtain our accommodation. Surprisingly, the rooms just before the Turkish border in Greece were cheaper than shortly after the border in Turkey. The same applies to the diesel prices! So we spend the coming night in Alexandroupoli, a distinguished Greek harbour city in Western Thrace next to the Evros river.

The harbour city of Alexandroupoli is right on the Thracian Sea, next to sea of Aegean. The sea also forms the southern boundary of the city. In the West, Alexandroupoli limits the municipalities Arriana and Maronia-Sapes in the regional District of Rodopi, on the north by the municipality Soufli and the east by the Turkish province of Edirne. The border station at Kozan is only a few kilometres away.

The city of Alexandroupoli was founded in 1871 under the name Dedeağaç as part of the Ottoman Vilâyet Edirne. The name of the city was correspondingly combind from the Turkish words, Dede - an honorary title - and Ağaç - for tree - together. In 1870, they started with the construction of  the Rumelian railway along the route Edirne - Selanik (Thessalonica) - Istanbul (Constantinople),  which initiated the development of the city Dedeağaç. The main reason of the rapid development of the city can undoubtedly be seen as the completion of the section of the railway line in the year 1872. The trade in the city prospered, so Dedeağaç already displaced Dimetokas importance as a centre of the Sandzak of Adrianople Vilayet in 1883.

In the First Balkan War the city was occupied by Bulgaria at the end of 1912 and was henceforth the most  important  Aegean port of  Dedeağaç country. At that time 185,000 Turks, 25,500 Bulgarians, 22,000 Greeks and 2,200 residents of other ethnicities lived in Western Thrace. Faced with the imminent connection to Bulgaria, resistance was formed in the Muslim-Turkish population, which ended in the Provisional Government of Western Thrace. Greece supported the establishment of such a Republic with the aim to influence running negotiations between the Ottoman Empire and Bulgaria at the same time, that there should be no peace between these two countries.

In the Peace of Neuilly from November 27th, 1919, Bulgaria had to cede the city to the Entente. According to the census, which was conducted by the French administrator beginning of 1920, the city had then 7,222 inhabitants in groups of 3,900 Bulgarians, 2,500 Greeks, 5112 Armenians, 165 Jews, 195 Turks. In the Contract of Sèvres, August 10th, 1920, the city was awarded to Greece and was renamed  - after King Alexander I.- to Alexandroupolis. Then according to the population exchanges agreed in the Treaty of Neuilly-sur, the Bulgarians had to leave the city. 53.000 Bulgarians were expelled out of Greece after 1920 and 46.000 Greeks were expelled from Bulgaria. This as a small information about the history of our host resort.

Shortly after moving into our room we were on the way to downtown to do some shopping and also to have dinner. We were quite surprised in the city centre by the fact that we walked right into a Greek Christmas market, which indeed could have some parallels to typical German Christmas markets, but then appeared so completely different. There were some decorated fir trees, one strange coloured nativity, even an inflatable snowman was seen and a few booths where various things were offered for sale, we found on this Christmas market. Absolutely different was the loud music on the stage set where a ballet group gave their dance art for the best to modern music.

We were on the walk to the stage when unexpectedly three young ladies rushed at us, which carried some signs in front of them. Before we even could deciphered, what was now marked on the signs, they repeated the textual messages verbally: "Free Hugs Xmas, Christmas time is coming"! And already there were intimate embraces with the young ladies. A nice, if somewhat surprising gesture. As we were able to observe later, the surprise was, however, similar in size with the locals. Unfortunately we did not have our photo equipment with us, so we could only make a few shots with the phone camera. Throughout the festival there was a lively atmosphere which remarked us how different the Christmas period is lived. A completely new aspect to us.

The idea of the Free Hugs was first familiar to a broad of people with the music video „Everyday“  by the Dave Matthews Band in 2001. After returning to Australia in 2004, Juan Mann started with Free Hugs in the Pitt Street Mall in Sydney, placing himself with a sign in the pedestrian area on which was written "Free Hugs". After the first people overcame themselves to embrace the stranger, his idea quickly reached cult status - until it was stopped by the police. As a reason for the police action against the "Free Hugs" it was explained that the city of Sydney want to have a insurance for possible damage to the Hugged demanded of him, for otherwise the city Sidney would maybe have to pay.

Shimon Moore, the singer of the band Sick Puppies, produced a video on the campaign for him, in which he addressed the origins, spread and also the prohibitions including the corresponding signature collection. This video was later put on YouTube in the internet by Shimon Moore. The video was very well received among the users of the portal (over 74 million hits, as of May 2013), whereby the idea of Juan Mann became a global movement.

Although Free Hugs is named a campaign, it is not an organization with solid particles. The principle is that everyone participates, when and where ever he wants it. It isalso not the obligation, to film their own actions or other type of recording. Nevertheless Juan Mann offers, with the home page of Free Hugs, an official platform for all those who own videos to upload them or to express their opinion on it in any form.

After this, for us unexpected new idea, we completed a few purchases and then made our way to the hotel. After a comfortable night we went across the border to Turkey in the morning, where we used the ferry from Gelibolu to the Anatolian mainland towards Bursa, Kühtaya and Antalya back home.

Trip to the Cave of Petralona - By car or is the bike an option?