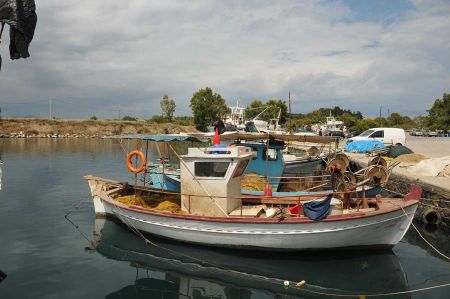 Another discovery tour led us to Nea Potidea on Kassandra peninsula, where we could hope to find some remains of Roman or Byzantine ruins according to the well proven ancient name of the place Potideia or Poteideia.

Nea Potidea is located at the most narrow point of the bridge (Isthmus) to the Kassandra peninsula, which is only 1 km wide at this point. To the north of the village runs, from west to east, the channel of Potidea, which surprised us with its overflowing clear, shimmering blue water. The idea to turn back with our floating boat and  paddling the channel was quickly taken.

Potidea was built around the year 600 BC,  founded by settlers from Corinth. The former colony lived mostly lived from the trade with the neighboring kingdom of Macedonia. By this trade Potidea reached great prosperity and so, around 550 BC, a mint was already set up. The history of the city reported about a large tsunami in 479 BC, which saved the city from being captured by the Persians.

Potidaia also played an important role in the early phase of the Peloponnesian War: The city was a member of the Delian League and at the same time used its good relations with the mother city of Corinth. Since an increasing contrast existed between Athens and Corinth, an ally of Sparta, Athens demanded that Potidaea should identify its Corinthian officials and grind its walls. Potidaia refused to follow the procedure due to its autonomy rights and declared its secession from the Delian League. This attracted the Athenians against the city and besieged it. After two years, the Athenians succeeded capturing the city Potideia in 430 BC and could keep it until to 404 BC.

From 363 BC, the city was again in possession of the Athenians. then it got in the field of view of the expansion efforts of the Macedonians under their king Philip II., in 356 BC the conquest of Potidaias succeeded. He destroyed the city and started awarding the territory of the city to Olynthos.

At the site of the old Potidaia, the Macedonian king Cassander 316 BC built a new city, which he had given his name as Kassandreia. In the period that followed shipbuilding industry grew steadily, which led to renewed prosperity in the city. After the battle of Pydna in 167 BC, the place was occupied by the Romans. After the conquest by the Turks in 1430, the city was abandoned and fell into disrepair.

Refugees settled in 1922 from Eastern Thrace to the field of the city Kassandreia, they dug the canal as it runs today in 1931. Since 2002 the town owns two bridges over the canal and a small fishing port.

We directly went to the fishing port where we could park our car. Even from the distance a small fortification is visible, which is today washed by the waves directly at the canal entrance. The castle dates back to the Roman period. Remains of the city walls have been preserved, which are a contrast to the channel today. Because some small restaurant and inns have immediately settled in and between the walls, it creates a very picturesque image of the small town Potidea.

Spontaneously we decided to cross the channel of Potideia by canoe at one of the following days. We will report about our experiences and maybe create a short video about the trip.

Agios Pavlos - The S. Pauls spring next to Neos Marmaras