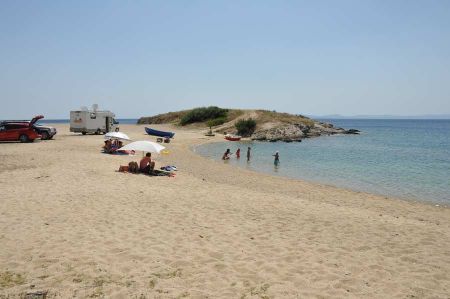 Looking for locations for Campers and holiday travelers one often hears of the three fingers of Halkidiki peninsula, namely Kassandra, Sithonia and Athos.

From its special, almost mythical reputation, the third finger Athos is benefiting most, probably due to the fact as an Orthodox monastery or monastic peninsula, which shall only be visited by male visitors, who in addition require a "visa". From Kassandra the traveler knows to report as a more noisy tourist destination, where large hotel complexes unite with holiday atmosphere and nightlife. If you like it more quiet, Sithonia copes much better, especially the densely forested, mountainous landscape contributes to the overall impression of an almost unspoiled nature.

The municipality Sithonia entirely includes the Isthmus Sithonia with its area, which is characterized by a hilly landscape. To the north, towards the central land of Chalkidiki, Mount Vrachoto rises with 492 m height and separates the municipalities Metangitsi in the north and Agios Nikolaos in the south. The municipality Metangitsi located in a hilly valley, which runs from northwest to southeast until the sea. The municipality area located south of the Isthmus of Sithonia is dominated by the ridge of Itamos with about 808 - 811 m height. This is the central mountain range of the Sithonia Peninsula in its longitudinal axis from northwest to southeast. Its highest point is the summit of Astrapokammeno Pefko with 817 m of height, the second highest peak in the municipality is the south-southeast of the village of Vourvourou located mountain Karvounas with 567 m.

The shorelines of the community are divided rich: Apart from open beaches with extensive sand or gravel beaches there are rather secluded bays. A significant part of the coast, especially at the coast of the Gulf of Singiti is formed by cliffs. The municipality Sithonia include a plurality of islands: In the bay of Vourvourou in the Gulf of Singiti you find the islands of Diaporos, Agios Isidoros, Ambelitsi and Kalomonisia. Something northwest between Cape Ritsos and Livari Peninsula the Island Kalogria is in a separated bay. In the Gulf of Toroneos a few kilometers off the coast of Neos Marmaras lies the island Kelyfos. All islands are, due to official sources, uninhabited, except the island Spalathronisia south of Neos Marmaras.

And some additional historical background information's

The modern municipality of Sithonia has been inhabited by settlers since the Paleolithic era. In ancient times, around the 7th century BC people from the city Chalkis settled on Evia island and founded the cities Singos and Galepsos. Singos was located on the territory of today's municipal district Agios Nikolaos, Galepsos on the territory of today's municipal district Neos Marmaras. The cities Singos and Galepsos belonged to the original Chalcidian settlement area as the rest of the peninsula Sithonia was occupied between 479 BC to 480. The Persian king Xerxes I, in his campaign against the Greek city-states, especially Athens, had taken the territory of the present municipality of Sithonia and recruited soldiers from Singos and Galepsos for his campaign. After the Persian defeat 479 BC and the withdrawal of the Persian army from what is now Greece, the cities Singos and Galepsos joined the Delian League and were thus under the hegemony of Athens. In the tribute lists of the Delian League, the city Singos was paying to the Federal Treasury of the Confederacy for the period 452/451 BC. The city Gale (Galepsos) paid from 436 BC payments to the federal treasury.

Ahead of the Peloponnesian War, the cities Singos and Galepsos withdrew from the Delian League: they had previously formed an alliance with the city Potidaia, which has become a point of conflict between the hegemony of Athens on the one hand and Sparta on the other hand. The Macedonian king Perdiccas, after the exit of Chalcidian cities from the Delian League, recommended a merger of the population of some cities to one major city (Synoikismos, Anoikismos). The cities Galepsos (Gale) and Singos, under this "cooperation development", lost the majority of their population to the now considerably grown Olynthos. In Peloponnesian War  of 431 BC, today municipality was the scene of fighting between Athens and Sparta. In 425 BC the Athenians succeeded in conquering Singos and Galepsos. In 421 BC, within the Peace of Nicias, they looked for possibility of a return of Olynthos emigrant / resettlers population: this was - if at all - only possible to a very limited extent. Both of the cities Galepsos and Singos historical notes said, that they lost most of population in 421 BC.

The area of the ancient cities and the church of Sithonia was then part of Federal Chalcidian government under the leadership of the town Olynthos. The defeat of the federal Chalcidian towns and Olynthus in the First Olynthian War between 382-379 BC changed the membership of today's municipal area to Chalcidian Federation. The Second Olynthian War during 350-348 BC ended with the defeat and dissolution of Chalcidian Federation and the destruction of the town Olynthos:... The victorious Kingdom of Macedonia under Philip II took control of the entire peninsula of Halkidiki and thus also on the territory of the present municipality Sithonia.