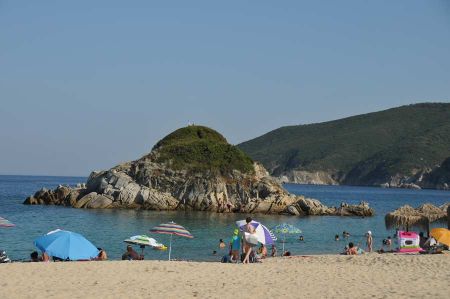 The day of our current explorations on Sithonia was nearing its end, time to take care of accommodation for the night. From Andrea and John we have got the tip to use the campsite at the beach boulevard of Kalamitsi.

We followed their hint, especially since there was still time enough time for a swim in the bay. So we went to the spot where the roof tent was quickly opened, the camp warden placed a table with two chairs and then we went to the sandy beach of Kalamitsi, which is just about 60 meters away.

Excellent water quality and the very pleasant water temperature fits for a relaxing end of the day. There was hardly any wind, so almost no waves were present, the sea rather resembled a lake where you could spend hours drifting on the water. The sun was already low, as we decided to go along the bay for a little walk.

Kalamitsi is located almost at the end of the Sithonia peninsula, a small town with some sports and fishing boats in the picturesque natural harbor area. The waterfront is just modernized with a paved "sidewalk" along the narrow street, which is lined with beach bars and beach restaurants. All manageable in size, so that you learn to know each other quickly and you are recognized and welcomed the next morning too. There are few, even too small hotels, so the number of beach visitors is quite manageable, even now during the high season.

The entire bay is lined with rocks, and there is a small rocky island, which is often used as a target during swimming. We also meet a diving school, which starts to the different dive sites by dive boat from here. During our conversation with Sylvia, she is not only responsible for operating the bar in the diving school with adjoining restaurant, so she quickly shows the expertise of the diving operation, where in addition to the compulsory courses for beginners and advanced, wreck diving or cliff diving is possible.

Somewhat surprised, after exceeding the outcrop behind the harbor, we encountered a small settlement of naturists, who have settled in the following, almost completely isolated bay. Actually interested in a photo of Mount Athos looming in the background, we briefly descend to the tent roofs of the nudists, where we were friendly welcomed. For years, there is this camp, where there are always some long-term residents and some continuously changing tourists. The connection to Kalamitsi, because just from there any "supply" can take place and it seems to be working, because a little later, we meet two of nudists in Kalamitsi again, this time modestly dressed.

After the tour we returned to the campsite, time to speak with the camp warden, who is the owner for 30 years and lives in the campsite all year long. Perhaps Kalamitsi is another place we should integrate within the framework of our project work. Another visit is in any case already agreed on.

Beautiful bathing coves next to Sarti on Sithonia