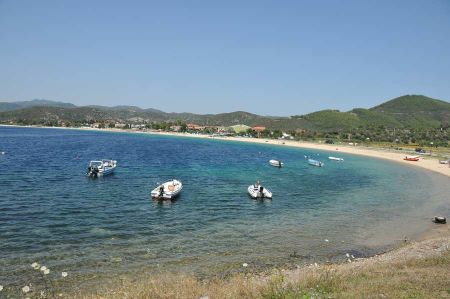 After several days of exploration of trails in the National Park of Mount Olympus and possible outdoor activities and culinary offerings around Rapsani we turned to Halkidiki, the peninsula next to Thessaloniki that is basically quite well known to travelers because of Mount Athos and the surrounding monasteries.

In addition to exploring the summery beaches we were, of course, quite interested in the history of the region, the opportunities for walking and cycling and of course the domestic culinary delights in combination with all-year tourism, or at least until November, as we will explain in the next articles and pictures.

Let's start with the history. About 200,000 years old human remains of Homo heidelbergensis were found in Petralona cave. In the same cave ashes of a fire were found, which are about 1.0 million years old. Whether these fires, however, were created by human hands, is still unclear.

Remains of early settlements, which were inhabited by Thracians, can be found among others in Olynthos, Galatista, Vassilika, Sani, Afytos and Toroni. The earliest of finds date from the 4th millennium BC. Also stilt houses from the early Bronze Age can be found here.

In historiography, Halkidiki significantly appears in inscriptions at the time of the Persian War in the middle of the fifth century, as Xerxes built so important Xerxes Canal in order to organize save circumnavigation to his fleet for not sailing around the first finger of Halkidiki.

The name Halkidiki comes from the numerous cities on the peninsula. Residents of the Greek islands, in particular from Euboea and Andros, have created settlements, under the leadership of the city Chalkis, since the 8th century BC. In addition to people from Euboä also Bottiäer settled between Olynthos and today Nea Kallikrateia on Halkidiki.

The most important cities were Olynthus and Potidaea, the only Doric colony on the peninsula. After the Persian wars in the middle of the fifth century BC, the whole landscape joined the Delian League. 432 BC, a conflict between Athens, Corinth and Sparta developed. Potidaia, was considered to be the trigger of the Peloponnesian War. Potidaia joined the conflict 431 BC from the Attic Maritime League and was subsequently besieged during the Peloponnesian War and then ingested. The Chalcidian covenant existed on the north west coast of the Aegean Sea since approximately 430 BC. With the defeat of Athens in the Peloponnesian War 404 BC Attic Maritime League stopped working.

Later Philip II. of Macedon conquered the colonies of the Greek city-states on the peninsula during the Second Olynthian war, and Halkidiki was smashing the Chalcidian Federal in 348th BC final part of the Macedonian Kingdom.

During the Roman conquest of Greece (Macedonia) 146 BC was under the rule of the Roman Empire. With the division of the kingdom in western and eastern Roman Empire Halkidiki came to the eastern part, the later Byzantine Empire.

Our destination was the middle finger, or how it is named: Sithonia, with the small peninsula Lykithos, were the ancient Toroni once existed. Today Toroni is a small, by tourism just little detected village at three kilometers beach of Toroneos Bay. Its name probably comes from Greek mythology, because Toroni was the mother of Poligonos and Tilegonos who were defeated by Hercules, the woman of the sea demon Proteus.

In the 8th century BC,  Toroni was colonized by Chalcis and later joined the Athenian confederacy. In 424 BC, the citizens of the town Sparta helped during battles against Athens. The Athenians, who had barricaded themselves in a fortress at Cape Lykithos were beaten there. In 348 BC, Toroni was conquered by Philip II. King of the Macedonians, 168 BC after the dissolution of the Macedonian kingdom, the Romans took over. Because of its central location to the almost natural harbor, the town has eased under the sea due to distortions of the earth's crust and now only can be visited by diving, later Toroni was rebuilt several times. Ancient Toroni was one of the richest cities of Halkidiki.

The ruins, better, the few remains that there are still viewable, are very interesting, of course, not to be compared with other known archaeological sites, at least for the archaeologically inclined traveler. Only the Christian basilica Agios Athanassio that fell victim in a huge fire during the 6th century, is worth seeing because of its mosaics.

Along the dust roads of Olympus from Rapsani to Litochoro