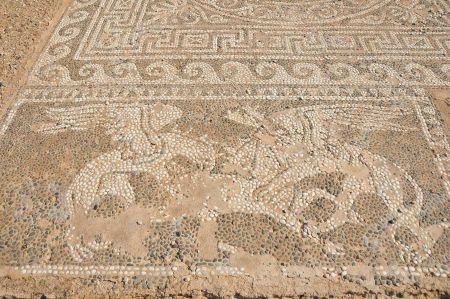 Our explorations in Halkidiki had us led to the ruined city of Olynthus, despite the now hot summer temperatures, an absolutely watch able destination.

In a park-like landscape the visitor will find the ruins of the northern part of the ancient city of Olynthus explained with diagrams and descriptions, the excavations in other districts are still continued. Particularly the ruins "North" are the strikingly narrow buildings, one can almost speak of compacted terraced houses that run along the streets. Clearly visible is the planning of the city along the road system, no established structures in comparison to other cities. Very interesting are the well-preserved floor mosaics in some of the houses, however, not all retrieved mosaics are visible due to their protection from environmental influences. Here we recommend further research in the publications of the archaeologist Robinson, who worked as an archaeologist in Olynth in the 20s of the last century and has made watercolors of mosaics in its publications.

Olynth was an ancient city that was erected more than 2,000 years ago about 4 km inland from the northwestern end of the Toroneos Gulf, the modern road towards Sithonia (2nd finger) is in the immediate vicinity. The city was built on hills east of the river Vatunia (in antiquity: Sardanos) that rise 30 to 40 meters above the surrounding countryside. The metropolitan area comprised the fertile river plain, which borders on the foothills of the mountains to Polygyros and on the west by a for Vatunia parallel escarpment in the north and east.

In 480 BC Olynth had been submitted to the Persians under Xerxes, at the time the city was also first mentioned in documents in which the concentration (Synoikismos) with the coastal cities Mekyberna, Singos and Gale is described. A year later, after the Persian defeat at Salamis 479 BC, the Persian General Artabazos was attacking the now rebellious Olynthus and killed the residential Bottiaier. The city was then handed over to a Greek Chalcidian population. Then, the city developed into a supremacy within the Chalcidian Cities.

After a brief membership in the second Delian League 378 BC to 377 BC, the cities on Halkidiki succeeded to renew their old alliance. The Chalcidian Bund won power and importance in the next two decades and had temporarily more than 30 members. However, it was drawn into the struggle for supremacy in the Aegean between Athens and the ascending Macedonia under Philip II. With the conquest of Pydna, a member of the Delian League, by Philip II. in the year 357 BC Athens saw itself forced to declare war to Macedonia.

The Chalcidian covenant then agreed into an alliance with Macedonia. Philip II. succeeded in subsequent years to maintain not only the rule of his conquests, but increase this substantially. After the Battle of Crocus Field 352 BC he was the undisputed ruler of Thessaly, the northern Greece. The Chalcidian covenant was now in the midst of his dominions, and it was a matter of time that this covenant was "incorporated" into his kingdom. The pretext for the conquest of the Chalcidian cities happened in 349 BC with the inclusion of the on the run half brothers of Philip II, Arrhidaios and Menelaos, by Olynthus.

After Olynth had not met the invitation of Philip II. to deliver the pretenders, Philip ordered the attack on the city. Because of the conclusion of the defensive alliance with Athens and the posting Athenian auxiliary corps under Chares arrived too late, the Macedonians taking Olynth previously succeeded in 348 BC. The city was destroyed and its inhabitants sold into slavery. The remaining cities of the Federal Chalcidian then arose without significant resistance and were added to the Macedonian Kingdom.

In chronological order three separate districts emerged in Olynth. The oldest part of which was destroyed by the Persians 480/479 BC was located on the South Hill.

The old town of Olynthus lay on the plateau of an elongated hill south of the city that occupied a settlement area of approximately 6 hectares. The colonization of the South Hill sat in the 8th and 7th century BC and can mainly tracked to the 4th century BC. The conquest of the city by the Persians 479 BC mentioned by Herodotus can be archaeologically proved with great certainty by a burnt layer from the 5th century BC. The area was densely built and is characterized by an irregular urban layout. Reconstructed houses and premises were, due to lack of space, of relatively small dimensions. The city respectively opened up to two roads running on the edge of the plateau.

Proposed reconstruction of houses on the North Hill

The ancient plan was not only a multiplication of the previous population of Olynthus, but gave the city an entirely new character. In contrast to the growing irregular development of the old city the new town were equipped with wide streets and large plots of land that were aligned to a rectangular pattern. The basic unit of this classic grid city was always the same size tailored land with a width of 58 feet and a depth of 57.5 feet. Depending on the location in the map one block made up to ten, strung together in two rows plots, the insula. Highways and byways separated the east-west-oriented Insulae. The 5.80 m to 9.20 m wide main streets running from north to south, combined new and old town and served as arterial roads to surrounding areas. In contrast, the east-west running roads allowed access to the individual lots and were applied with about 5 m width such that two carriages could pass unhindered.

In the north of the old town, the excavators found the foundations of a 32 x 16 m relatively large rectangular building, which was probably used in public. Another major building was located in the south of the old town and was probably used as a public building after the Persian storm of 479 BC. Through the expansion of the city 432 BC and the influx of new residents additional buildings for the economic and social life were added. In the southern part of the new town on the northern hill a 135 x 85 m undeveloped area, which was limited to the north and north-east corner of public institutions, was discovered. An accumulation of coins found within this space suggested that this is the central square of the polis, the Agora. Another interpretation approach saw here a sacred precinct with temples, which however could not yet been proven by excavations. On the north side of the square stood a portico. This was followed east by a building that was equipped with a central row of columns and thus possibly could serve assemblies. A well house formed the East boundary of the square. Evidence of remains, which indicate a theater that could not previously be provided.

The water supply in Olynth was ensured in various ways. Next to River Sardanos, the year-round water was lead into isolated tanks and mainly clay pipes that supplied Olynth with water. The starting point of this partially pressurized pipe system was 8 km north of Olynthus, where a spring was found in the mountains at Polygyros. At the end of the aqueduct probably several water well were in the city, two of them were detected. The tube system appears to have existed in the 7th century BC already. This suggests by at least shards of black-figure vases, which were washed with water connection, found on the floor of a house in the old town. Olynth possessed one of the oldest pressure pipe systems in ancient Greece.

Three cemeteries are known which have been used by the inhabitants of Olynthus. The largest necropolis is on a river Sardanos west of the city. Here under the direction of archaeologist Robinson 560 graves could be investigated. Another much smaller burial ground is located in the north of the city. About 700 meters east of South Hill the third necropolis was found.

Olynthus is the main location of the so-called Olynthian mills. These mills reported to have some benefits over the ancient Egyptian grain mills and mark a significant step forward in the ancient history of technology. The older mills consisted of a large flat stone on which the grain was added and the back and forth was to grind the grain. When Olynthian mill appears, however, the grain was placed in a hopper, from which it fell into a gap between the millstones. The work therefore had no longer repeatedly be interrupted to replenish the grain. In addition, a long handle was attached, so you could move easily. In addition, oil mills were found in Olyth who served for pressing olives.