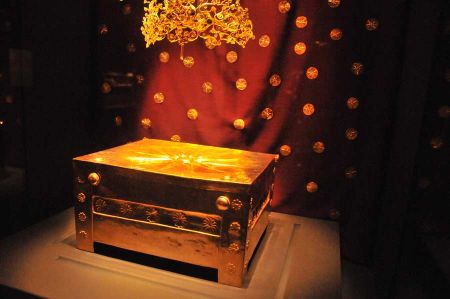 For more research on the footsteps of the Romans we were in Thessaloniki again, of course there were always references to the history of the region, now we were able to experience its peak in terms of expansion and importance under Alexander the Great.

No surprise, that we at least wanted to deal a little with pre-Roman times. Some time ago we heard of the sensational finds at Vergina, where archaeologist discovered, in the context of daily similar excavations, almost untouched royal tombs that were absolutely unique.

The excavations of the Hellenistic sites began in 1861 under the French archaeologist Leon Heuzey and last until today. We were initially a bit disappointed, as we ourselves could not enter the archaeological sites of the ancient city of Aigai, the city sanctuaries and the theater, which were built in the 2nd half of the 4th century BC. A brief conversation with present archeologists revealed that the city probably was heavily damaged in the 1st half of the 2nd century BC.

The remains of the palace are on the slopes of the Pieria Mountains. The building itself measure 104.5 × 88.5 m and had a square courtyard with 44.5 meters each side, which was bordered by a huge arcade. In addition, the palace, which was probably two storeys on the east side, had a terrace that opened onto the Aliakmonas Valley. The palace is dated to the 3rd quarter of the 4th century BC. And was destroyed even before the conquest of Macedonia by the Romans 168 BC.

In 1977 Manolis Andronikos discovered richly decorated tombs of the kings of the Kingdom of Macedonia under a large tumulus. In the area of Vergina are nine chamber tombs from Macedonian times. The grave mound with the Philipp-grave and the other so-called tombs are now integrated into an underground museum, which presents numerous grave goods.

A modern designed, park-like entrance leads to the Great Tumulus and thus to the entrance of the museum, where there are four grave sites with a diameter of 110 m and a height of about 12 m. Three tombs are richly painted and provided with many grave goods, the fourth had been badly damaged and discovered robbed.

The biggest grave of the tumulus is called the grave of Philip II. It is divided into a grid and reservoir chamber and has a façade with Ionic columns, pilasters and a colorfully painted frieze. The grave goods of the Philip tomb are very extensive. Both in the pre-chamber as well as in the main chamber were, among other things, a golden Larnax, which was decorated with a star, so-called star of Vergina. The Larnax in the main chamber contained a golden oak wreath and, once wrapped in a purple cloth, the burned bones of a man. The bones belong to Philip II., Father of Alexander the Great. In examining the skeletal remains of a healed bone wound on his right eye by the British anthropologist Jonathan H. Musgrave this was ensured. As recorded Philip II. lost his right eye at the Battle of Methone 355/4 BC.

The Golden Larnax (Chrysi Larnaca) with the Vergina Sun, a sun icon on the top, presumably contains the remains of King Philip II. of Macedonia, about floating a golden oak wreath. Earlier, it was exhibited in Thessaloniki Archaeological Museum, since 1997 it is located at the original location in Vergina.

The tombs provide important cultural and historical references to the self-presentation of the Macedonian royal dynasty of Argead Dynasty. Against the often held view, Macedonia falls outside the Greek cultural sphere, the royal family in the tombs presented as Greeks: grave goods show hunting and war scenes and symposia as part of Greek life of the king; weapons and even everyday objects such as wine mixer (which should prove that the Macedonian dynasty as the Greeks wine not pure drinking) should be seen as reminiscent of Classical Greece, cremation and burial of ashes to the idols of the Homeric epics.

The archaeological site of Vergina since 1996 counts as UNESCO World Heritage Site, a visit well worthwhile.

The Waterfall of Edessa - short trip into the city